The surf at Elmer’s Island usually produces some great trout fishing, with the chance for some real trophies.

There’s no time like now to fish the surf and catch trophy-sized speckled trout, according to veteran angler Cabot Corso of Destrehan, who spends as much time as possible in the waters off Elmer’s Island.

One of Corso’s fishing buddies, Dylan Bordelon of Metairie, proved that April 25. Bordelon always dreamed of hooking and landing one for the wall, which he did.

“Oh, yeah, that’s the biggest trout of my life. I’m so excited. It’s always been a dream of mine to get one over 7,” Bordelon said after catching a 7.38-pound speckled trout while wading in the surf with Beau Lindsay and Dylan Yancey, both of Metairie. It was Yancey’s first time fishing in the surf. 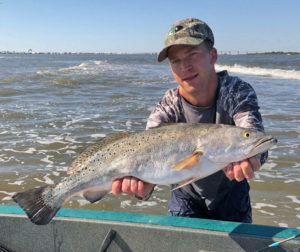 “I mean, I don’t care if I don’t get another trout this year,” Bordelon said. “I mean, I’d love to. I’m definitely going to go out about 20 more times this year, (but) I’m glad to have that one.”

Bordelon and everyone else wading in the surf will have a chance to hook another one in the next month or so, because it’s prime time, Corso said.

“If you’re just targeting speckled trout, large speckled trout, the best time is in April and May,” he said. “Basically, that’s my take on the surf. Around April, May, the big fish that are spawning in come in behind Grand Isle, Caminada Bay. The warmer it gets, the more fish come in. It gets better and better. The other day in the surf, we caught a couple sheepshead, a jack (crevalle) or two, a couple redfish, and the speckled trout were there.”

Otherwise, he explained, the hotter it gets as June turns to July, the more ladyfish, bluefish, jack crevalle and sharks show up.

Corso has been fishing around Elmer’s Island since the late 1980s. At first, he focused and hauled in plenty of speckled trout in a cut between Elmer’s Island and Fourchon, but it eventually filled in, so he sought out other cuts leading to the marsh. Why? He prefers to fish moving water, which he believes is the key to catching speckled trout.

“Sometimes fish are all along the beach. Sometimes when they’re not, if you can get by one of those cuts, there will be baitfish there all the time: shrimp, baitfish, pogies. A lot of times, that’s a sure bet,” he said.

“It has to be the sinking one. It’s very versatile. If you work it fast, it’s like a topwater. Or you can let it sink. You try to find a pattern,” he said.

Corso met Bordelon in 2017 when Bordelon had a hook imbedded in his hand that Corso extracted. They became friends with a shared passion of fishing in the surf after that experience.

Corso, 59, went fishing with Ryan Bourgeois of Denham Springs the day Bordelon got his hands on the 7.38-pounder. They launched Corso’s bass boat around mid-day at Bridge Side Marina, motored to the west and anchored the boat in the surf off Elmer’s Island. The two buddies finished with 24 speckled trout and two redfish, Corso said, adding that 99% of the speckled trout were full of eggs.

Bordelon’s trout was certainly was full of eggs.

“I was fishing the surf,” Bordelon said, in 2½-foot and higher waves and white caps. He was fishing with a “Color X” Down South soft plastic on a ¼-ounce Deathgrip jig.

One particular wave caught his attention before he made his first cast at 3:05.

“I saw some mullet, a school of mullets riding the wave,” he said. “She was following the mullet. I threw (behind the wave) and she hit. I popped it twice, and it didn’t ever hit the ground. That fish just took off.”

His hookset was solid and flawless. It had to be with the brute he stuck.

“I literally hooked her in the corner of the mouth,” he said. “Perfect. Like a redfish, she took off 20 yards. I told my friend, ‘It’s, like, a 5-pounder.’ She ran out on me two, three times. I’d get her close, she’d see me and take off again. I fought her for two, three minutes straight.”

Bordelon was using a 6-foot-6 Shimano GLF spinning rod and Stradic 2500 reel spooled with 10-pound Stren Superior mono, and he was concerned about playing the fish in the crashing surf.

“That’s what I was worried about. She had some big teeth and I thought she’d (cut) the line. That was freaking me out the whole time,” he said.

Bordelon dipped and missed on the first attempt to net the heavy trout. The tiring fish wasn’t so fortunate on the next go-round.

Bordelon and his buddies had gone out in the surf in a dinghy. He knew he wanted to mount the trout and needed a big ice chest the dinghy wasn’t carrying.

Barely within wading distance, however, was Corso and his boat.

Bourgeois was the first to hear about the catch.

“I was farther down the beach,” Corso said. “My buddy, Ryan, said, ‘Dylan caught a big ol’ fish!’ When he caught it, I knew he wanted to mount it. He walked down to our boat. He knew we had a 64-quart ice chest.”

Bordelon said, “He (Cabot) shook my hand immediately. He said, ‘Dylan, that’s a fish of a lifetime.’ I said, ‘I know, man.’ We giggled about it.”

It wasn’t the first trophy fish that Bordelon has caught. On March 13, 2019, he caught a 7-pound, 14-ounce bass in Lake Ponchartrain.

Which one was more exciting?

“Probably that trout. They’re neck-and-neck. I promise you, my heart was out of my chest on both of them,” he said. “I don’t know if I can catch another trout that big. But I think I can catch a bass that big.”