Any coastal angler who has floated over a gin-clear duck pond has seen redfish feed. The fish leisurely stroll through the water like flexible bulldozers, their powerful tails swaying methodically while their eyes and lateral lines stay attuned to their surroundings, hoping to run across something edible.

Once some bait enters their kill zone, the fish dart in a flash and open their gaping maws, flaring their gills to create suction. The crab, shrimp or baitfish is reduced to protein.

I’ve always wondered if speckled trout feed in a similar manner. Do they kind of meander past, think about it and lazily mouth their prey, or do they shoot in like a jaguar springing from its lair to attack before the victim can escape?

I always assumed the latter, that specks feed frenetically, reacting more than thinking, but I certainly wasn’t positive — and getting one to hit on camera can be tricky.

Believe me, I’ve tried. For a while now.

A company called GoFish Cam sent me one of their underwater cameras a few months ago, and from the moment it arrived, I couldn’t wait to put it to use. The package comes with a float that wraps around the camera, so it can function as a cork, the lens constantly peering down at the suspended bait.

The first time I used the camera, I got some footage of a sheepshead eating a live shrimp. That was cool, but I really wanted to see a trout feeding, so I made that my goal with the GoFish Cam. That should have been simple enough, but for a while, my efforts seemed doomed.

For one thing, the float that comes with the camera is designed to be gently placed in the water. Make a long cast with it, like you usually have to do to catch specks, and the camera slips through.

During a couple of successful trout trips when the camera would likely have gotten some great footage, I couldn’t get it to stay inside the float. I reported the problem to the company, and they suggested a work-around — tying the camera to the line below a plunger-style H&H cork.

I rigged it that way, and hit the water in eager anticipation of getting some eye-opening footage, but I couldn’t find a really big school of trout. By the time I did — several trips later — the battery had lost its charge. 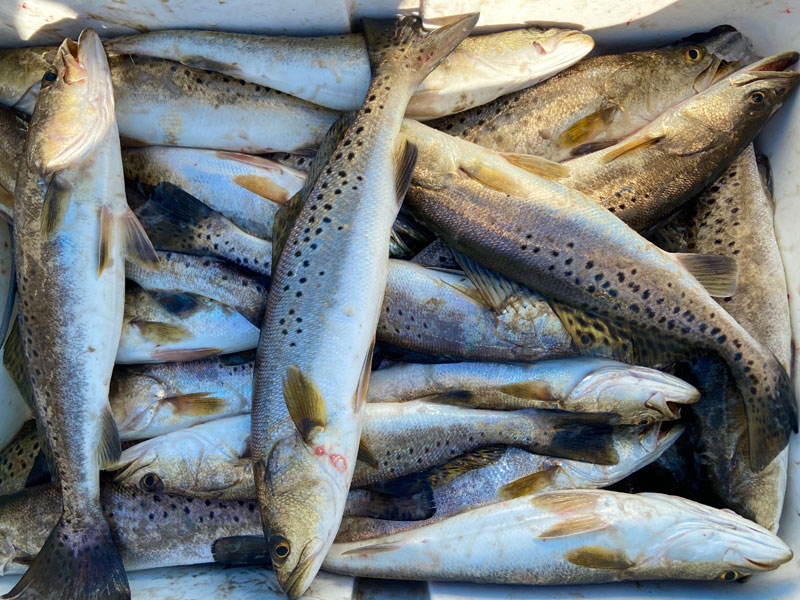 It was just one fiasco after another, but this long, tear-jerker of a story has a happy ending.

Last month, I went fishing with Capt. Lane Zimmer down in Lafitte, and brought a fully-charged GoFish Cam with me, hoping we might run across some good speckled trout action. Zimmer is one of the best fishermen in south Louisiana, and the action has been good near Lafitte, so I definitely liked our chances.

Sure enough, we got on a hot bite, and I swallowed hard and broke out the GoFish Cam. On the first cast, the cork quickly plunged, and I reeled in a nice-sized speckled trout. Unfortunately, the camera had become tangled around the line and was pointing at the sky.

This attempt also seemed destined for failure, but the next cast also produced a fish, and this time, the camera was oriented properly. I was ecstatic. I made several more successful casts before putting the camera away, and when I got home, I got to see what I’d been eagerly anticipating.

With about 18 inches of visibility, the water was clear enough to allow a good view of the white/shrimp-colored Ghost Minnow I was fishing. The bait would disappear from view only when I popped the cork to draw the attention of nearby speckled trout.

The camera showed one trout hitting the bait and pulling the cork down, but the fish grabbed only the back half of the lure, entirely missing the hook of the Deathgrip jighead.

Moments later, however, another larger speck inhaled the whole thing, and took a forced trip into Zimmer’s Blazer Bay. The fish, much as I had anticipated, appeared out of nowhere, hitting the lure with lightning quickness.

It was one of the coolest things I’ve ever seen.

If you’d like to check it out for yourself, head over to louisianasportsman.com/underwater-video-of-speckled-trout.