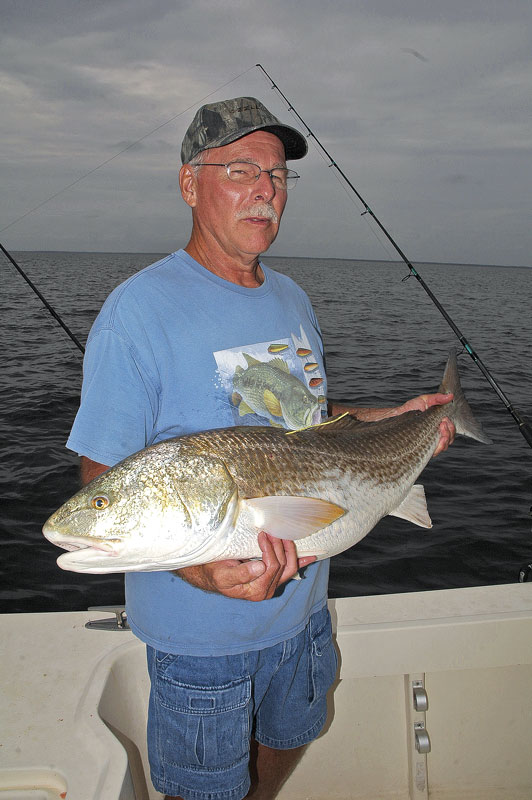 Late summer is prime time to catch bull reds on a popular reef in Vermilion Bay.

How ravenous are the bull reds that live around Boxcar Reef on the western edge of Vermilion Bay near Southwest Pass?

Gerrit “T Blu” Landry of Patoutville remembers one night several years ago when the bull reds’ voracious appetite even surprised him. He was fishing with a buddy, Dusty “Chop” Davis of Lydia.

“One fish ate my mullet, then swam over and ate Chop’s mullet,” Landry said. “There’s a picture of (the bull red) on the floor with both hooks and lines in its mouth. We both fought it at the same time.”

If a fish eating two baits was going to happen, it wouldn’t have been a surprise that it was at Boxcar Reef, which has been notorious for giving up huge redfish for at least the past 40 years.

Fishing for bull reds starts getting good in July and should be even better in August, according to Landry, a third-year charter captain who has been fishing the area his entire life. He knows from experience that nighttime is the right time, although he and many other fishermen never rule out daytime hours.

Boxcar Reef was the place to catch award-winning bull reds during the heyday of the now-defunct Acadiana Redfish Association. Acadiana’s top fishermen were in that organization in the 1980s and 1990s, and many of them tapped the reef’s redfish population at night.

Landry, 40, joined the ARA 20 years ago when he had his first boat, but he didn’t know about the reef at first.

“No, actually, I didn’t start fishing the Boxcar until I joined (ARA),” he said. “When I first started fishing Acadiana, we were fishing the Nickel,” he said, referring to Nickel Reef, a small reef a few miles off the eastern end of the Marsh Island, almost 12 miles south/southwest of Point Chevreuil.

“All of a sudden, they started showing up at the Boxcar. My fourth or fifth year in Acadiana, we started hearing about it. Everybody switched over. It was closer,” Landry said, adding that fishermen had fewer concerns about high seas or dangerous weather conditions by staying in Vermilion Bay instead of heading well into the Gulf.

Landry, lead production operator at Weeks Island’s Texas Petroleum facility, has learned plenty about it since then and has caught countless bull reds off the reef. While he doesn’t fish it as much now, nighttime or daytime, he’ll target the reef if clients want to catch 25-plus pound redfish or he takes his daughter, Faith, during the Iberia Rod & Gun Club Saltwater Fishing Rodeo every July 4 weekend.

Good times at the deep reef

“Oh, yeah, we’ve had some good times on it, for sure,” he said, catching and releasing 20 to 30 huge redfish a night at Boxcar Reef.

Landry catches bulls on the Boxcar Reef proper, and on a part of the reef that extends westward toward land and is higher, the Crown, beginning in July. The best fishing is a little later, and the reds will stay through November. He believes they spawn from July through September.

“My best months are September and October,” he said.

The reef starts at the first red buoy where the western side of Vermilion Bay meets the eastern end of Southwest Pass, then makes a loop and ends at the green buoy approximately 100 yards away from the red buoy, Landry said.

According to Landry, Boxcar reef was named after the late Roy Derise of Lydia, whose nickname was “Boxcar.”

“I’ve always known that,” Landry said. “That’s the background. (Derise) used to fish ‘slot’ redfish. It wasn’t known for bull reds. He was one of the few people that fished it that knew and fished it. He ran everything to compass. If you’d run through the bay, you wouldn’t know the reef was there. It’s deep. You won’t hit it.”

Landry, who owns Gotta Have Faith Charters, said fishing pressure there is less than it once was when there might be 30 to 40 boats around the reef at sunrise.

“There’s really not too many who fish it anymore now. They all fish it for the Fourth of July, and they still have CIFA,” he said, referring to the Cypremort Invitational Fishing Association redfish/speckled trout tournament that begins the first week of July and ends in October.

Boxcar Reef hasn’t silted up over the years because of its close proximity to Southwest Pass, where current rushes in and out with the tide. It’s a hard reef, Landry said, one that necessitates an anchor with sharp points or blades that dig into the bottom. He uses a homemade anchor. 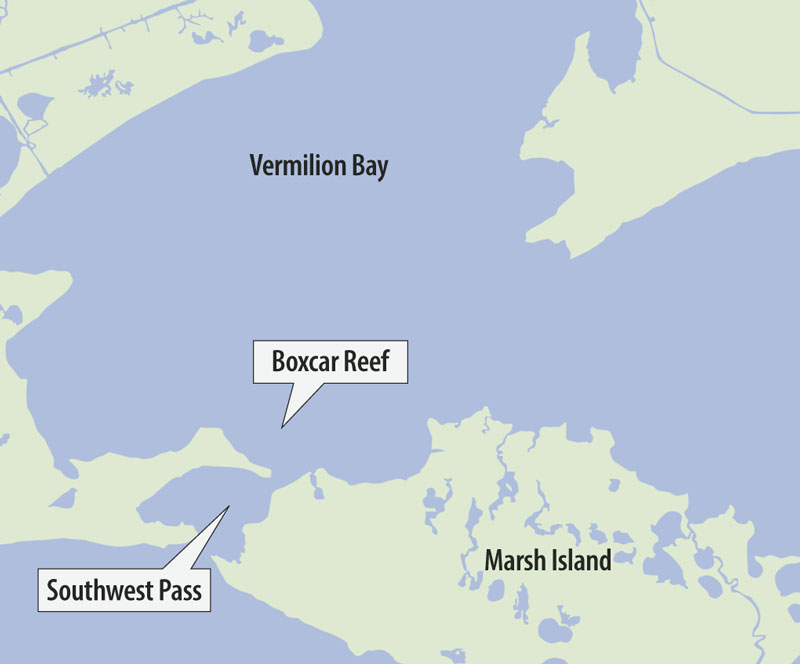 Landry targets the ditches and valleys in the reef. He said the natural bait selection is the key to enticing bull reds to bite, especially at night, when he rigs two battery-powered Q-beams to shine on the boat’s stern and also uses a 12-volt LED light.

The Q-beams illuminate the fishing rods he fastens in rod-holders on the stern.

Landry’s go-to baits are 7- to 8-inch mullet, Carolina-rigged. Any smaller, and the gafftop catfish will go to town on them.

“Most people’s problem when they try to fish it, they go over there with shrimp or finger mullet. You need BIG baits,” he said.

Another favorite bait is a live croaker. Cracked crab is a no-no because of the gafftops and other undesirables, but Landry said he does use a whole crab with everything in it, and bull reds like that just fine.

Landry’s fishing tackle includes 310 Penns or Calcutta 700s, both spooled with 120-pound braid tied to a swivel under a 2-ounce weight. A 6/0 “J hook,” which features a wider gap, is his choice.

Landry doesn’t engage the reel’s clicker, as others might. Instead, he has the drag screwed down tight.

“They hit like a freight train. They set the hook themselves,” he said.

Generally, he said, he’ll give a likely spot on the reef a little while longer than he would during the day, say, 1½ hours.

Often, fishermen don’t have to wait very long at all for the reds to get bullish at Boxcar Reef.