Jeremy Cable, 28, of Cocodrie, talks bowfishing with an infectious enthusiasm that will leave you anxious to get on the water with a bow. He’s genuinely passionate about bowfishing, and wants more people to give it a try.

The sport couldn’t have asked for a better ambassador.

Cable and his family operate Lite ’m Up Bowfishing, a charter service that specializes in lighted, nighttime fishing excursions in the waters around Cocodrie.

In 2017, Cable killed a 29.55-pound, 41.89-inch bull redfish that was recognized as a state and world record by the Bowfishing Association of America. The record was eventually broken, and he likes to brag that his fish isn’t even the top red at his camp; a client on a company excursion killed a bigger one, and now that fish is the fish to beat. Cable couldn’t be happier with how things worked out.

Why is Louisiana so attractive to bowfishermen?

“Louisiana is called the Sportsman’s Paradise for a reason, Cable said. “We get all kinds of fish here.”

This time of year, redfish are generally the most sought-after species by bowfishermen.

“They’re popular because they’re a great eating fish and they are so much fun to shoot,” he said.

Also, many sportsmen visit Louisiana for a chance to target species that they don’t have access to at home. Redfish are big bruisers and a novelty fish for many.

Of course, redfish are just one of Louisiana’s attractive options for bowfishermen. There are black drum and sheepshead to skewer as well. Flounder. How about landing a gar longer than a Fiat? If you’re in Louisiana, you’re in the right spot.

Is bowfishing right for you?

“If you’ve been thinking of giving bowfishing a try, just get out there and do it,” Cable said. “(Many bowfishermen) start by fishing from the bank with an old bow they have lying around.

“They get an old bow and put a reel on it, and from the first time they shoot at a fish, they’re hooked. That’s just one of the pluses of bowfishing: It doesn’t require a lot to get started,” especially for a bowhunter.

“It’s just a matter of getting out there the first time,” Cable said, “and don’t be discouraged if you miss.”

Whatever you may have heard, nobody is good at bowfishing in the beginning.

“Early on, bowfishing can be a lesson in humility,” Cable said. That’s another ingredient of the recipe that makes bowfishing so addicting. When you do, finally, nail a big fish, the rush will just be that much better.

A few pointers from the pros

It’s not a bad idea to make your first bowfishing trip with a professional.

His guide service isn’t called “Lite ’m Up Bowfishing” for nothing. The boats carry enough lights to power a Nine Inch Nails concert. It’s an awesome thing to see. Without the glare of the sun on the surface of the water, the depths reveal their treasures around the boat. It’s a glimpse at another world not visible under normal circumstances. 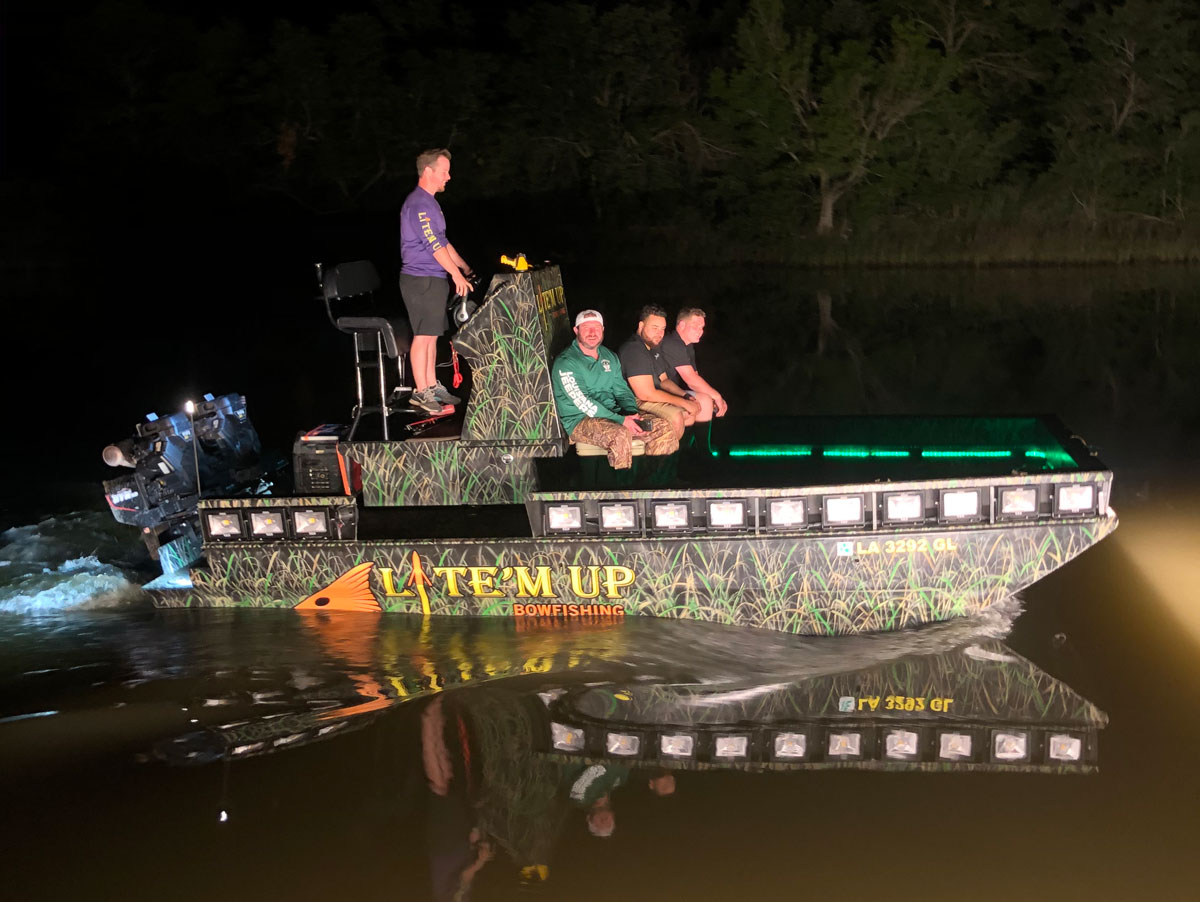 “You’re out there at night, and you’re seeing everything that moves through the water, every fish, crab, shrimp, otter, nutria, turtle,” Cable said.

It doesn’t hurt that the redfish are illuminated, too.

Another thing that doesn’t hurt is your skin from cooking out in the sun all day. Not that Louisiana needs a sunny day to be hot, as Cable is quick to point out. “It still gets pretty hot at night.”

Fishing after sundown also gives people the option of fishing during the workweek, which is convenient for many.

“It’s one of those ‘fun for the whole family’ kind of situations, too,” Cable said. “We’ve had kids as young as 7 years old shoot a fish for the first time.

“We strictly use PSE Discovery 2 bows, which are small, compound bows that we can tune up to fit any adult, or tune down to fit the kids,” Cable said. “We use AMS retrievers (reels), which is pretty much the standard for down here in Louisiana; it’s strictly a bowfishing-type reel or retriever.”