Here’s where reds that win tournaments like to hang out

Want to catch redfish in that 16- to 27-inch “slot” for tournaments, like Gerrit “T-Blu” Landry of Patoutville does while competing in the Lydia-based Southcentral Fishing Association circuit or July’s Iberia Rod & Gun Club Saltwater Fishing Rodeo out of Cypremort Point?

Go to the grass.

Finding redfish in the grass and getting them to bite is one thing. Then, getting 2 to 8 pounds of fighting-mad redfish out of the grass, which is plentiful along the shoreline of Marsh Island, takes a timely, strong hookset. Landry and his father, Gerry, of New Iberia, demonstrated that one windy day on their way to limiting out with several ideal “slot” redfish — including one of an almost perfect size.

How does an angler get two good slot-sized redfish — two is the limit for many redfish tournaments — in the boat when it counts? Catching numbers increases the odds, according to Gerrit.

“You can be catching fish, but as far as the right one, that’s luck. It helps when you’re catching a bunch. You catch the first big one early in the morning, then you’re chasing the second one the rest of the day,” he said.

Finding a place to fish

Landry spoke as he guided his boat from Quintana Canal Boat Landing through rough water across Vermilion Bay about an hour after sunrise to go out of Southwest Pass. High east winds had changed his original plan to fish grass beds around South Point on the southern shoreline of Marsh Island, the northern edge of the Gulf of Mexico.

After rounding the west end of Marsh Island, he pointed the bow to grass beds near Long Point. Vermilion Bay’s water looked like chocolate milk because of runoff from the Atchafalaya River. The color was somewhat better along the southern shoreline of Marsh Island.

“That’s what we’ve been fishing in all year. This ain’t horrible. It’s a lot better than (Vermillion) bay was,” said Landry, who, along with other fishermen, can’t wait for the water to clear and the salinity to rise.

“Absolutely. With the river like it is, that might not be this year. (But) I think July or August, we should get a little clear or salty water,” he said.

The Landrys prefer targeting redfish in the grass along the shoreline on the Gulf side of Marsh Island.

“They’ve got a lot of good grass here and they’re fat,” said Gerrit Landry, a production operator for Texas Petroleum who will turn 39 this month. He’s also been working as a fishing guide since October 2018, when he got his charter captain’s license, as the owner of Gotta Have Faith Charters.

Landry is putting years of fishing experience to use after starting at a young age with his father, who was an avid offshore fisherman with two offshore boats until about three years ago.

“He’s been fishing with me since he was big enough to follow me,” Gerry Landry said, including scuba diving and spearfishing together when his son was younger.

Gerry Landry, 63, who trained “hog dogs” most of his life and has hunted hogs for three decades, retired a few years ago as a production managed for Tech Oil Products. As of mid-May, he was waiting on his charter captain’s license to join his son’s charter business.

They made a formidable team, a patient team, even when they didn’t have a decent bite for the first 2 or 2½ hours on the water because the tide was stuck at its lowest point.

Changing of the tide helps

Around 8 a.m., a time when half-hearted bumps were the norm for bites, Gerrit Landry said, “Yeah, the tide’s supposed to come up about 10 o’clock. It ought to turn on a little bit. I think we’re at the bottom of the tide. It’s slow. We’re waiting for a little tidal movement. It’s tough. It’s tough. You’ve got to slow down and fish. We’re going to get them. We’ve just got to find a little pile.”

As the tide began to rise and water started moving along the north edge of the Gulf of Mexico, the action began after a move to another grassy shoreline area near The Mounds. As predicted a couple hours earlier, those bumps turned into bites.

Soon the bites became more frequent, and the first few redfish were stacked in the ice chest.

“They might be just starting to bite. They ain’t playing with it. Two to a point. We’re getting better,” Gerrit said. 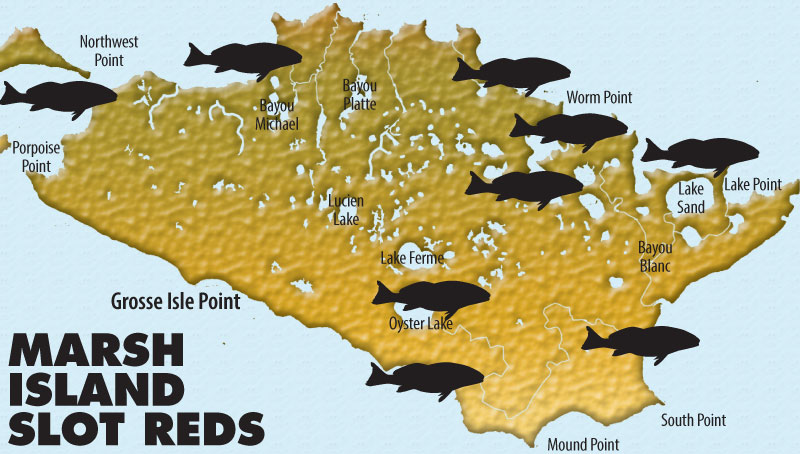 “When we get to five to a point, we’re doing good,” his father said.

“With these new Daiwas I’m using, if you set them right, you can cast into the wind,” he said, proving it time after time as he fished, noting he also has a Daiwa Tatula at the ready but the Coastal is “just a little bit bigger.”

The reels are loaded with 65-pound Daiwa J-Braid all the way from fishing reel to the hook, even if he’s using a leader. He doesn’t use monofilament or fluorocarbon for a 12- to 16-inch leader or line connecting the popping cork to the leadhead jig, just the J-Braid.

His fishing rods of choice are 7-foot-3 and 7-foot-2, medium-heavy Duckett rods. With those sticks, he said, “I’ll just flip them in the boat.”

The Landrys relied on two soft plastics — Get’Em Shads in Shrimp on the Run and J.B. Golden colors, respectively — on ¼-ounce Get’Em jigheads. Each jig cast to the grass was tipped with a fresh hunk of shrimp.

The perfect “slot” redfish was their eighth redfish of the day, after a well-placed cast by Gerrit Landry.

The Highwater titanium popping cork plummeted below the surface with an audible plop, the loudest of the day, on a solid bite. Gerrit Landry set the hook hard.

“Oh, that’s a MAN! Did you heard that cork?” he said, leaning back on the redfish, which wasn’t coming in peaceably. It had serious intentions of swimming away from the boat, but Landry changed its mind and its course.

Soon, it filled the net after being scooped by his father, and they both looked in deep appreciation at a 2615/16-inch redfish, the perfect size for a redfish tournament, a fat one that weighed between 8 and 8½ pounds.

“That’s how it usually happens. You catch a fish like that (in a tournament) about 2:15,” he said.

“If they pull drag on these reels, the way I’ve got them set, yeah, you’ve got a tournament fish,” he said. “Oh, that felt good. That fish right there will make your day.”

One exactly that size made his day on March 30 in the first Southcentral Fishing Association tournament of the year out of Quintana Canal Boat Landing. It weighed 8 pounds even and won the Calcutta, leading his boat to a third-place finish in the 26-boat field, representing some of the best redfish fishermen in Acadiana.

Gerrit credited the popping corks for adding a little more motivation for the redfish to bite.

Why use a popping cork?

“I think that cork aggravates them. When they hit it, they drill it,” he said.

A few minutes later, his father caught a 23½-inch redfish. After it was safely in the box, Gerry said, “I don’t know if they get mad at the cork, but I know when they hit it they’re not in a good mood.”

One of the redfish the elder Landry caught bit hard twice and he swung and missed each time. He avoided striking out on the next cast to the same spot when he hooked and boated a 23-inch redfish.

Gerry laughed and said, “I was just fattening him up those first two (bites), showing him the buffet.”

For many fish in the marsh, April is a transition period into their summer patterns. The marshes around Leeville fill with redfish in April. […]

Park and shop at the MRGO rocks in April

Capt. Gene Dugas, of Rather Be Fishing Adventures, says April should be a good month for speckled trout and redfish fishing at the MRGO Rocks. […]

Sabine National Wildlife Refuge is now open for fishing business. The best choice for April is sight-casting for redfish. […]

About Don Shoopman 332 Articles
Don Shoopman fishes for freshwater and saltwater species mostly in and around the Atchafalaya Basin and Vermilion Bay. He moved to the Sportsman’s Paradise in 1976, and he and his wife June live in New Iberia. They have two grown sons.