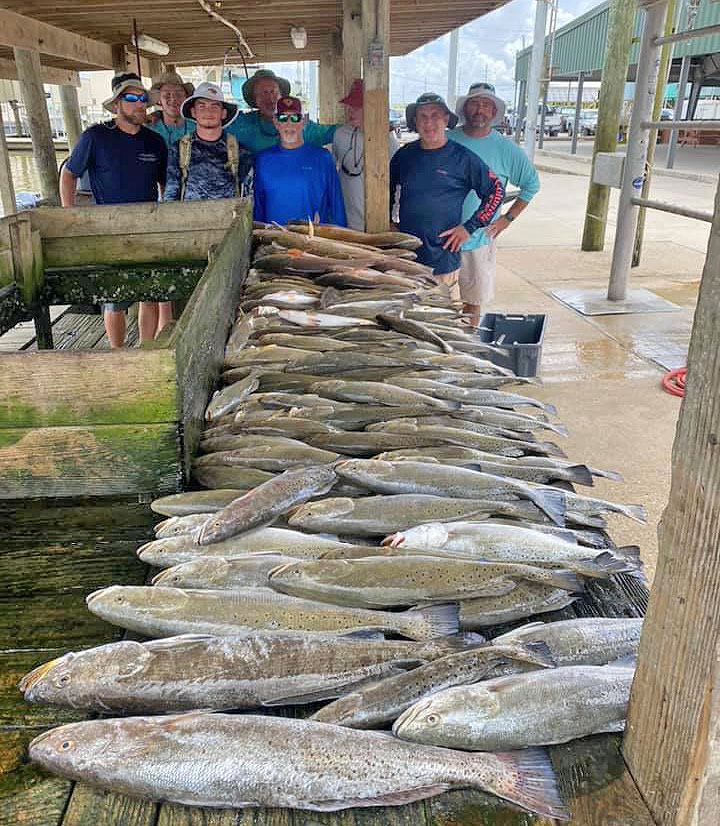 A group of high-school football players and their fathers headed home to South Carolina from a fishing trip to Venice with enough trout to feed the whole team and a lesson in perseverance taught by one of Venice’s most-esteemed professors of fish craft, Brandon Carter of Reel Shot Guide Service.

“The first stop was a bust,” Carter said. “(We) worked 200 yards of shoreline with beautiful water and lots of mullet, but only caught one trout.”

Carter decided to try another spot along the shoreline, but on the way, he had an idea, a change in strategy that could turn the day around if it worked.

“(We) made a 180-degree turn and headed offshore to try a wellhead that was on my mind,” Carter said. “I’d caught several large fish there the previous week.”

Carter and crew arrived at the well to find a barge parked there.

“I wasn’t very optimistic,” Carter said, “but I stopped to fish anyway.”

The group didn’t get a single bite, but Carter’s instincts told him that his hunch about the well had been correct. He knew the spot held trout; it was more than a hunch.

“Instead of leaving, I decided to try a different angle,” he said. “As I moved around, I noticed some bait on the surface.”

An area of water that had shown only disappointment, when viewed from a different direction, now seemed to teem with promise.

“(Our) first cast caught a 22-inch trout,” Carter said, “and at that point, it went bananas: We caught about 60 trout as fast as we could cast.” The fish were between 18 inches and 24 inches long.

The words from the jack-up rig reached across the water and shut off the bite as if speckled trout operate by an invisible switch.

But before the mood blackened, word came from another Reel Shot boat, this one captained by Brandon Carter’s brother, Jon, about a trout bite at another wellhead.

“I moved over to a well located between us,” Carter said, “and caught 20 more nice fish, mostly on Shad Matrix.”

During Carter’s chess match with the trout, a third Reel Shot boat, this one captained by Jay Quiros, moved to the shoreline, and started catching reds on almost every cast.

“We released double-digit bulls in each boat,” Carter said.

“We were east of the river all day that day,” Carter said. But people were catching fish on the west-side, too.

With the weather as variable as it has been, a fisherman has got to have the right mindset to be successful.

“Every day, is a new day,” Carter said, “and you’ve got to reevaluate and game-plan on the fly.”

The first spot has usually not been the best spot lately.

“(We’ve done) a lot of moving and hunting, adjusting to the conditions, and trying different techniques,” Carter said. “One day, (the trout want) a live shrimp under a Four Horsemen cork; the next, it’s a free-lined croaker; and the next, they want a Matrix Shad bounced on the bottom.”

The lesson? When you find them, hit ’em while they’re hot…It might be the only bite you find all day.

More than 300 hunters have signed up to take part in the Swamp Safari Shootout, aka the Nutria Rodeo, at Venice Marina on Feb. 24-25. […]