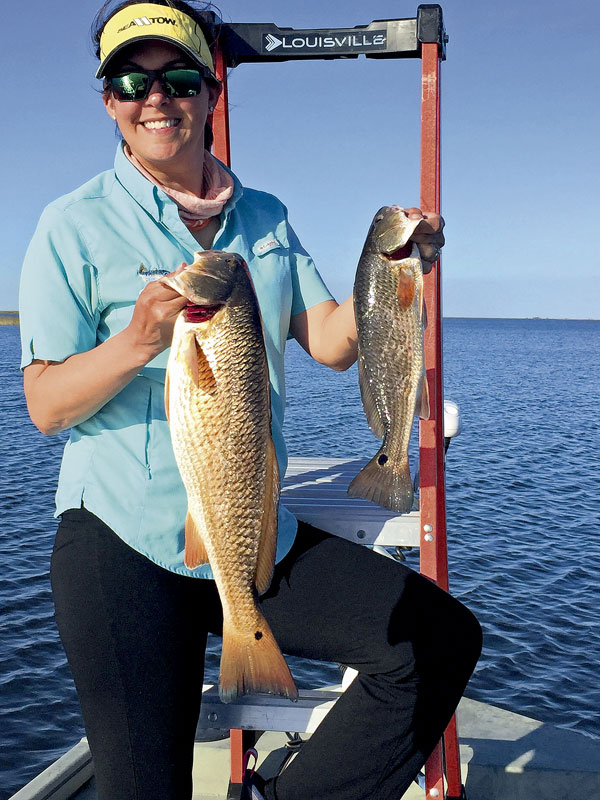 Fishing, cooking, eating: how an Eden Isles couple incorporates the mindset of subsistence fishing to get meaning and purpose to modern life.

Many of us strive for a better connection with nature, something fleshy and earthy to hold on to in this sterile, electronic landscape. We’ve gone to the moon and beyond, mapped the human genome and eradicated diseases that plagued humankind since the beginning.

But in exchange for what, I wonder. Nothing fundamental, I hope.

Humans are pack hunters, like wolves, and there is a spiritual void in us that the mammoth hunt once filled, a vacancy now haunted by the faces of happy tribesman, their hands straining to haul in their nets bursting with fish.

We half-remember a sense of fulfillment powerful enough to lift us and take us away from the mundane. You were a human being, performing your function on earth, an example of unity of purpose, of man not at odds with himself.

Christian and Colleen Orfanello live in Eden Isles, a neighborhood along the northeastern shoreline of Lake Ponchartrain. They are living proof that there is a middle way, a way between homesteading on the Alaskan frontier and living a life as soulless as a German automobile commercial. The recipes and methods the Orfanellos have shared are the touchstones of something much greater: a way of living in this century through which you can remain present, grounded, and functional as a human being.

One morning in May, Christian emptied one of his crab traps into a bucket. As he walked, the crabs — there were 12 — clunked into each other like animate turf stones echoing from the bottom of a well. He and his wife had invited some friends over for dinner.

The guests would not arrive until that evening, but it takes time to prepare dinner, especially in their home. The Orfanellos use only fresh, locally sourced foods, foods as beautiful after preparation as they are delicious.

His bare feet pad away on the weathered dock towards the back door of his house, the crabs marking each step with a crash, like the sound of a busy pool hall, but gritty, coming from the bottom of a bucket.

Except for Christian’s father, a Sicilian who emigrated to Louisiana as a toddler, their families have been New Orleans stock for generations. Their mothers grew up in the 9th Ward in the 1950s and 1960s, when the 9th Ward was suburban and middle-class.

Colleen is the senior vice president for the Military Order of the Purple Heart Auxiliary, but when she’s not in that role, she works for other charities and non-profits. Christian owns and operates Sea Tow, which provides a service not unlike AAA, but for vessels on the water.

Though their busy work schedules often pull them in opposite directions, their connections to the place they live and each other, are strong, bound as they are by passion for a way of life that is their own. And then there’s also the good food.

Looking back, they can’t recall a time before cooking was a powerful ingredient in whatever mojo’s at work in their relationship.

“We (met) at a party for a mutual friend,” Colleen said. “Christian walked in the door, introduced himself and asked if he could help me cook; I was struck by how effortless and natural it was to him.”

Ten months later, they were married.

“For Christian and me, shopping in our backyard is a way of life,” Colleen said. “When we feel like trout almondine, tripletail or stuffed flounder, we venture off in our boat. But when it’s rainy or we are too busy for a boat ride, we shop dockside, where the crab and redfish are plentiful.”

“We catch mostly flounder, redfish, speckled trout, drum, sheepshead and blue cat,” Christian said. “We’ll use plastics when we can — usually Matrix Shad, a coastal Louisiana favorite — but there are times when you’ve got to use live bait; there’s too much competition in the water for plastics.”

The Orfanellos prefer to use live shrimp for bait, and there is very little waste.

“If you catch your fish, and you still have shrimp left, well, there’s no shrimp fresher than live shrimp, is there?” Christian asked, laughing. “Sometimes, we’ll fry the shrimp as a little snack, but we’ll make stuffed flounder with it, too.”

Another thing that the Orfanellos have in common is learning to cook at a young age.

“My mother’s family is full of amazing cooks,” Colleen said, “and they were so eager to teach me the fundamentals that I can’t think of a time when I didn’t cook.”

Christian has borrowed heavily from his father’s Sicilian heritage in his cooking.

“We’re from New Orleans, and we love butter, he said, “but I didn’t grow up eating a lot of butter; it was always olive oil, wine and fresh vegetables. Garlic.”

Christian hesitates to call his cooking “fusion food,” saying only that there is a Sicilian edge to many of his dishes.

“For example, one thing that I do that’s kind of a Sicilian thing I got from my dad, is I make my basting brush out of mint leaves held together with a bread-tie,” he said.

When cooking redfish, Christian said, “We’ll bring the oil and wine sauce up again and again with the mint brush, brushing the sauce over the meat several times while the fish is cooking, and when we’re done, the fish will be rich and moist with the tiniest touch of mint that will interact with the flavor of the wine sauce.”

Combined with the flakiness of the fish, the flavors will explode in your mouth.

“Little tricks like that from the Sicilian garden,” he said, “are fundamental to my cooking.”

Colleen’s mother was Alsatian.“She had a sweet tooth, and I blame her for my love for anything sugary,” she said. When Colleen was a girl, the bus driver often delivered fresh pastries from her grandmother’s bakery to her house. Although she couldn’t understand how precious those deliveries would become as memories one day, she aches for them now.

“What I wouldn’t give for her Riz au lait pudding!” she said.

When Colleen was young, she learned that food can speak about love when words fail.

“MeMere died when I was young, and the only recipe I have from her was written haphazardly on a torn piece of aged paper; some of it in English, but the rest in her version of shorthand French,” she said.

The Orfanellos love to entertain, so they do it often.

“We love surprising people with our food,” Christian said. “Take bull redfish, for example. What are you supposed to do with a bull red? Well, you’re supposed to throw them back because they’re the baby makers, but sometimes after a long fight, they die — or will die. What then?”

The problem is that bull redfish, when cooked most ways, tastes like rubber, or the “sea” taste will be too strong.

“My wife and I add it to our turtle soup,” Christian said. “We have always enjoyed turtle soup, but turtle meat is expensive, and you don’t get enough when you buy it.”

They cut bull redfish filets into nice-sized chunks and let them cook in the soup for the final 30 minutes.

“And oh, my goodness!” Christian said, “the turtle soup is absorbed by the chunks of redfish, and when we serve it, people go crazy. They cannot believe it’s bull redfish.

“Another of our favorite recipes — and we reverse-engineered this one from a dish at a restaurant that we like — is a crab dip served over fried bowtie pasta. The dip is a thickened cream sauce with chunks of fresh crab in it, with lemon and wine for flavor. After you batter and fry the pasta, you spoon the sauce over them as you would crackers.”

“We often catch our dinner directly off our dock,” Colleen said, “and we plan our menus according to what we catch.”

“Three-quarters of the year, we’ve got good crab,” Christian said. “We could go into our back yard right now and pull up a dozen or two-dozen crabs if the traps were out. But when we have people over, I’ll go down the canal to the bayous, and run my crab nets. It’s the way the old-school crabbers did it, not like emptying crab traps: it’s more work, less wait.

“We’ll use our catch (in multiple offerings), for instance, crab meat…. The first thing I do with the crabs is boil them in a good, Louisiana seafood boil, and after we eat the boiled crabs, Colleen will use the leftovers to make a different dish or two.

“Also, if you’re paying market price,” he said, “you could be paying anywhere from $40 to $60 for a tub of crab meat, but because we catch so many crabs, we are able to give them to family; our parents love to get them.”

The Orfanellos use crab in many different dishes.

“Even if we’re having filet mignon, we’ll top it with sautéed crab meat,” Christian said. “Then, we’ll make our corn and crab soup and crab cakes and crab au gratin, and other pasta and cream dishes.”

The Orfanellos usually have fresh fish to give to friends and family when they visit.

“Nothing goes to waste, even the fish carcasses go into our crab traps.” Christian said. “We just love the ‘circle of life’ that the bayou brings into our lives.”

For the couple, catching and cooking food for friends and family is a passion, but they also enjoy catering charity events.

“We’ll boil crawfish, make jambalaya or red beans and rice,” Christian said. “We cater a lot of big events, but it’s always for charity. There is a satisfaction that you get from catching fish, cleaning them, cooking them and eating them with people who matter to you; that’s special.

“I think that’s why many people who choose this lifestyle do it. You see the smiles it brings to people’s faces; it feels good,” he said. “When we go to a family function, and aunts and uncles ask if I have any fish for them, or when we can provide speckled trout to people who are eating tilapia all the time, it’s nice.”

“For us, cooking allows us to unwind and really talk,” Colleen said. “I like to think that we live simply, and love grandly.”

Could a restaurant or professional catering business be in their future?

“I don’t want to do anything that will keep me off the water,” he said. “If somebody offered me a million dollars to spend three years getting a restaurant established, I’d turn him down. The first taste of the outdoors I got was as a kid, and I was hooked. I knew that’s where I want to be.”