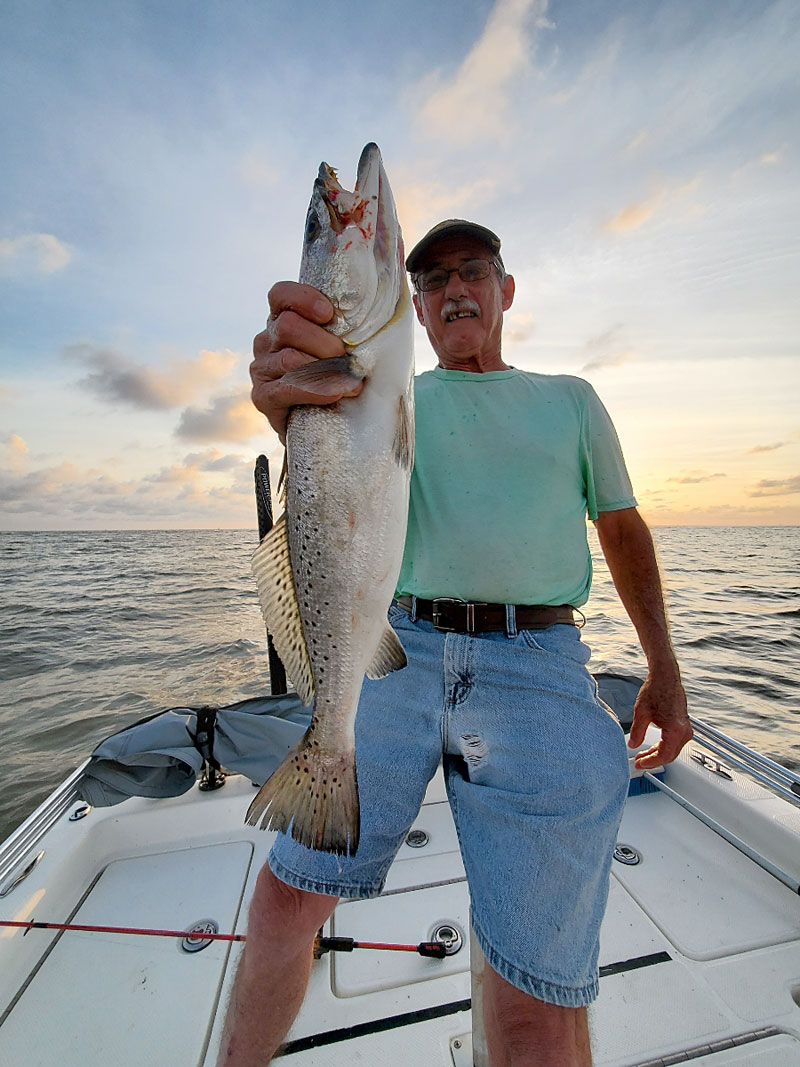 Capt. Tommy Pellegrin finds great success catching speckled trout on the beaches out of Cocodrie this month, and the coolest part is, he generally leaves the expensive live shrimp swimming in the tanks at the marina.

“I fish live shrimp more in (June) and plastics more in July, just because the schools are tighter, “he said. “When they turn on, it’s just a madhouse.”

Pellegrin fishes double rigs with ¼-ounce jigheads along the beaches, and he prefers curlytails in opening night color to draw hits from ferocious specks.

“The curlytail has a lot more action than a paddletail,” he said. “You want any color that is going to be similar to what a shrimp is.”

Pellegrin will also double rig Berkely Rattle Shrimp in a variety of colors. He constructs the double rig with a 3/8- and a ¼-ounce jighead.

“I put the heavier one on the bottom and the lighter one on the top,” he said. “It just casts better and tracks better.”

Every summer, the speckled trout go outside to spawn, and July is right in the heart of it, according to Pellegrin.

“There is major spawning going on,” he said. “In early July, the brown shrimp are on their way out. Everywhere the shrimp are going to pass, that’s where the trout are going to be waiting for them.”

Fishing the vast beaches can be a little bit daunting. It’s an open expanse of sand and waves, but if you get out there early enough, you can certainly find speckled trout under diving birds, making them very easy to catch.

If no diving birds are found, Pellegrin said being able to read the intricacies of what’s going on with water movement on the beach can really aid anglers.

“You have to learn how to read the beach,” he said. “You need to find a current coming 90 degrees off the beach. All these waves are going over the sandbar and into the trough. Somewhere along there, that trough breaks, and it has to come out. There is a little eddy spot.

“That’s going to be key, because the fish are going to be right there waiting for everything in that trough to come out with that tide falling.”

Pellegrin suggests when you find those areas, make a note on your GPS; that way, if you happen to go on a rougher day where they’re not seen as easily, you’ll still be able to locate the area where the fish are holding.

This bayou is always hot this time of year!

For decades, Jeff Bruhl of Madisonville has been fishing Bayou Liberty on the edge of Lake Pontchartrain for speckled trout. […]