With this year’s high, muddy water in the rear-view mirrow, this famed spot for reds and speckled trout is ready to return to prominence. Here are some places to go and things to do as winter approaches.

December has long been a favorite time to fish the Delacroix area because its diverse habitat: big, open lakes and bays for mild days of fishing, and deep-water canals and bayous for chilly mornings and colder days.

And then there’s the ever-present redfish that make Delacroix’s waters prime hunting grounds any time of the year.

The high river levels and cold, muddy waters that were unleashed this year on Delacroix Island took a heavy toll and wrecked the speckled trout fishing for some time, but waters with higher salinities returned to some areas in the fall, bringing back shrimp and trout.

Recently, Capt. Ron Broadus of Captain Ahab’s Charters invited me to fish, along with his  protege, Capt. Ryan Schiaffino, so we met at his Delacroix dock before sunup and motored down to Serigne’s Marina to pick up some live shrimp.

The morning was trying to break as Broadus took the helm and ran through the big washout known as the “Graveyard,” and from there into a series of similar huge washouts with no names. He said trout have shown up inside in a number of places, and these shallow washouts had been holding some nice fish. He’d fished the area the day before and put some quality specks in the boat and wanted us to see what Delacroix was producing before the real cold sets in. He said the fish would seek deeper water as the water temperatures fall, and that anglers unfamiliar with the no-name waters should exercise caution when navigating them, especially on lower tides. 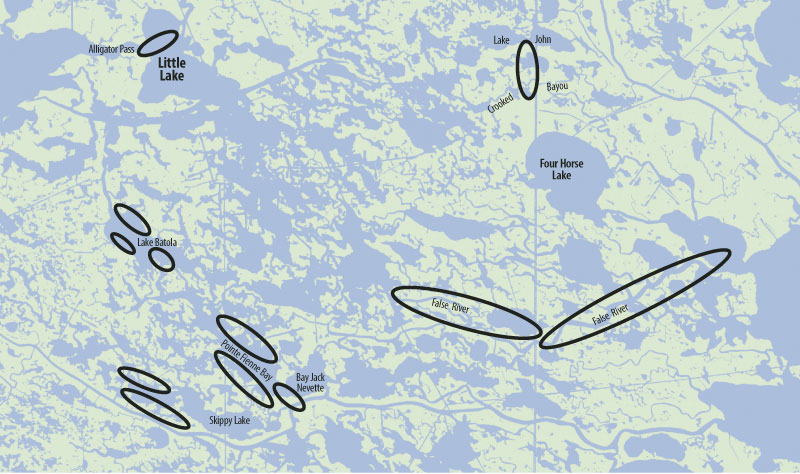 Schiaffino stuck the Power Pole smack dab in the middle of a huge washout, with no distinguishing signs to recommend it. The depth gauge said we had 3 feet of water under us, so the washout was becoming a lake of its own. We each had a rod rigged with a soft-plastic bait, but the action was slow to non-existent.

After 10 or 15 minutes, I switched to my live-bait rig and loaded it with a big live shrimp. I got a hit almost immediately and reeled in a very nice-sized trout. I reloaded, threw back to the same spot and caught another just like it. Schiffiano and Broadus cast their lures into the same spot, but the freckled fish ignored their offerings and kept inhaling my live shrimp. After I caught a few more, they switched to live shrimp and joined the action.

“This is why we spend the extra few bucks for live shrimp — for times like this when the fish are finicky and won’t hit the plastics,” Broadus said.

Fortunately, as colder weather sets in and shrimp begin to disappear, trout usually get less finicky, and soft plastics work just fine. But if live shrimp remain available, you ought to bring some along.

“Now that we’re in the colder months, you really have to have two plans: one for the moderate weather days, and the other for colder weather,” Broadus said. “And many times, you use both plans, the cold-weather plan early in the morning, and after the sun warms things up you switch to the milder-weather plan. We really have to go with what the weather gives us.

“And the good thing about fishing this time of year is you don’t have to be on the water at daybreak. Often, it’s actually better to leave a little later and let the sun come out and warm things up a bit.”

Broadus said you can catch trout in many areas across Delacroix waters, but he usually concentrates on these few.

“Last year was a bust because of the river water, but usually the trout show up in good numbers in Little Lake at the mouth of Alligator Pass,” he said. “It’s a well-known hotspot, and when the action begins, the boats pile in, so you have to be courteous. Once you leave Bayou Gentilly and get into Little Lake, I head towards Alligator Pass and start drifting about halfway across the lake. Usually, the wind will drift you towards Alligator Pass, and you can use your trolling motor to add some control to your drift if necessary. Just toss your plastic baits about 21/2 to 3 feet under a cork. Sometimes, you’ll catch your limit in only one pass, and sometimes, you’ll have to make several drifts. But when the trout get in there, there’ll be plenty for everybody.”

“I like to drift, starting right in the middle of the lake,” Broadus said, “and I like to work along the north shoreline off the various points and fish the current line that is almost always there. The mouth of the pass leading to Pointe Fienne is also a good place to drift. I find myself moving a lot around Lake Batola, but you should do pretty good in there this month and next.”

“This is a very well-known fall hotspot, and it’s called a hotspot for good reason. It can be very productive, giving up both specks and reds,” he said. “Last year was not productive, but neither was anywhere else in Delacroix as far as trout is concerned, But I expect much better things this year, and it’s happening already.

“The whole of Pointe Fienne holds fish, but I’ll mostly drift along the whole northwest side, or I’ll drift the area near the pass into Bay Jack Nevette. I also see a lot of anglers and guides fishing along the south bank on both sides of the Pencil Canal, so that’s worth trying.”

“This is one of my favorite lakes in the late fall and even into January if it doesn’t get too cold,” Broadus said. “I’ll usually drift the northwest side of the lake around the cuts, and the tactic is pretty much the same everywhere. Cast live shrimp or soft plastics under a cork as you drift, and whenever you get some action, stick down your Power Pole and try to put a few fish in the boat. When the action stops, resume your drift or re-drift the same area.”

Broadus said all of these areas are good on moderate weather days, just before, between or after cold fronts blow through. The best action is always the day before and two days after a front, he said. For soft-plastic baits, he likes the Matrix shad in shrimp creole or lemonhead colors.

For reds, he suggests live or dead shrimp under a cork, fished in the same lakes, just closer to the shoreline near cuts, drains, points and coves.

“When the cold weather sets in, the fish will go deep and huddle up, and you’ll want to fish soft plastics in purple/white or black/chartreuse in the deeper holes of Oak River and False Bayou,” he said. “In Oak River, you’ll see boats lined up from Orange Bayou to the Twin Pipelines, and Oak River will produce fish even on windy days. Just anchor at the cuts and drains and cast towards the middle of Oak River. Use a heavier jig head, 3/8- or ½-ounce, to make sure you get your bait all the way to the bottom or you just won’t catch fish.”

Broadus said the deep holes at the bends, turns and drains in False River are also productive in cold weather, as are the deeper sections of the Twin Pipelines between Lake John and Crooked Bayou.

About Rusty Tardo 359 Articles
Rusty Tardo grew up in St. Bernard fishing the waters of Delacroix, Hopedale and Shell Beach. He and his wife, Diane, have been married over 40 years and live in Kenner.