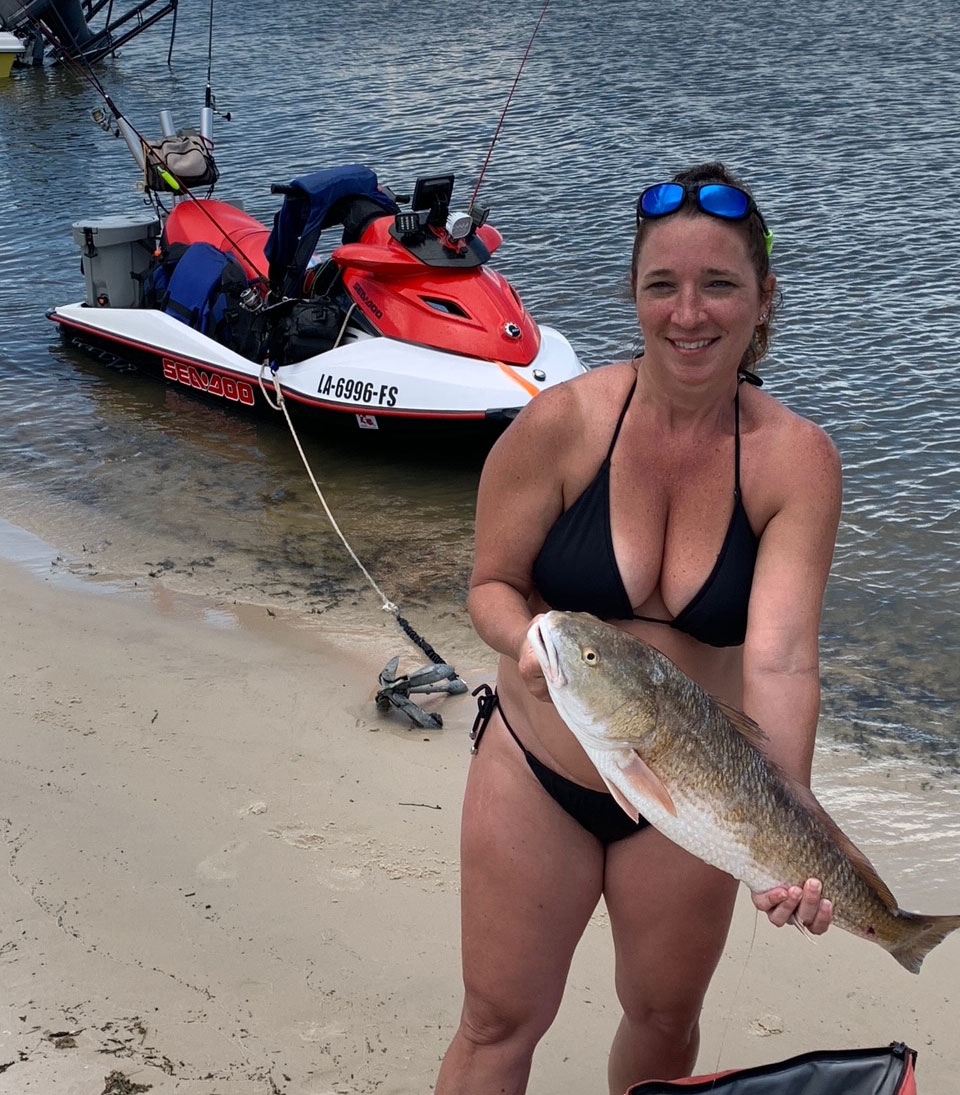 People have been fishing from personal watercraft (PWCs) since the first mass-produced models hit the market in the 1970s. One cannot deny that  — at least where catching fish is concerned — anglers are an innovative lot, and the sun has certainly not set on the curious fisherman zipping across the water on a WaveRunner, rod and reel in hand, eager to try a new spot or employ a fresh technique.

But the time of fishing from PWC’s has truly arrived. Across the globe, anglers are outfitting their vessels with fish-finders and other electronic gear, expanding the capabilities of a recreational machine that was once considered a niche technology.

Jock Smith of Lacombe spreads the good news about this new way of catching fish with evangelical zeal. A traveling construction superintendent, he was exposed to PWC fishing three years ago while working in Ft. Lauderdale, Fla.

“I drove down to the docks to check out the boats, and I saw about 20 guys on jet skis all rigged up for fishing,” Smith said.

When he asked what they were doing, they told him they were fishing for wahoo, mahi, and tuna. Yes, tuna.

“They were using their jet skis to fight tuna,” Smith said. “They’d let the tuna drag them around until it wore the tuna out; then, they’d pull the tuna onto sleds that floated behind their jet skis and haul them back to shore.”

Smith was living in an apartment and didn’t have room to store his boat.

“So, I brought my jet ski, rigged it up for fishing, and I tell you…I had so much fun,” he said.

That was three years ago. Smith has been fishing from a PWC ever since.

Designed to take a beating, a PWC is capable in rough water.

“They’re practically unsinkable,” Smith said, “and the seas don’t beat you up like they do on an 18-foot boat.

“If you rig them out right, you don’t really need a lot,” he said. “Don’t bring a tackle box bigger than your mama’s suitcase … or a Yeti ice chest that weighs 150 pounds; it’s possible to build a fishing jet ski without overloading it.”

Smith has rigged two removable ice chests on the back of his vessel, one as a cooler for food and drinks, the other a bait-well complete with a battery-operated bubbler that can keep 50 shrimp alive all day with a little ice thrown in occasionally.

Smith has equipped his vessel with three rod holders behind the seat, as well as one on each side, allowing him to troll with five rods at a time.

“Three-seater jet skis have comfortable seats,” Smith said. “You can throw your legs over the side (and use it as a bench).”

PWCs have gotten bigger and bigger over the years, and are now stable enough for serious fishing. He has installed two batteries controlled by a switch. If one dies, he’s got a backup.

“And it’s got a spotlight and directional lights, so if I’m out after dark, I can (operate legally),” said Smith, who puts the fish he catches in two fin-proof, zipper-type ice chests slung over the seat like saddle bags.

“My girlfriend caught a 30-inch red on Sunday — her personal best — and it fit perfectly inside; if you fill those puppies up with fish … man, you’ve got a mess of fish.”

The vessel is also outfitted with a fish-finder and bilge pump.

As a fishing technology, PWCs have a lot to offer: They are cheap to maintain, easy to store and cheap to run.

“We went fishing all day, and when I refueled my jet ski afterwards, I think I put 4 ½ gallons in it.” he said.

Cleaning and flushing the motor after a day on the water only takes about 15 to 20 minutes. It used to take him hours to clean his 24-foot boat after each outing.

PWC are perfect for operating in shallow water.

“We (go) into little canals and shallow ponds,” he said. “I just leave my GPS on, and follow my lines back out.”

“If I can’t find clean water in one area, I can shoot down a ship channel and find it somewhere else,” he said. “My jet ski really cruises at 50 mph, which means that nothing is more than 30 to 40 minutes away, and I’m not burning a lot of fuel to get there.”

Smith believes his ability to move efficiently between spots is a major reason that he catches fish on days when other fishermen struggle. He thinks anglers in traditional fishing boats don’t move as much as they probably should because of time and fuel considerations.

“I can zip around and find the good water,” he said. “And when we’re done fishing, we’ll go hang out at a sandbar or ride around; you get the enjoyment of being on a jet ski, too.”

One major drawback is that you can’t fit more than two people on a PWC, not comfortably, anyway, but Smith sees a potential upside to this limitation.

“When you’ve got a 24-foot boat, you’ve also got plenty of friends who want to go fishing,” he said, “but when you pull up to refuel, they’ll all disappear on you. Not a problem for a jet ski.”

“I’ve been fishing out of my jet ski for about three years now,” he said. “It’s funny; every time I pull up at the launch in Rigolets, I have a crowd of people admiring my jet ski, telling me how cool they think it is, and now, I’ve got four or five friends that have rigged their own jet skis for fishing.”

The cool factor matters, of course, and these days Smith sees PWC fishermen trolling his home waters more than he used to.

Manufacturers are catching on

The industry has gotten wise to the growing demand for ready-built PWCs for fishermen, though some are only available in New Zealand, where PWC fishing is incredibly popular.

The Sea-Doo Fish Pro (MSRP $13,899) and the Kawasaki Ultra LX-F (currently unavailable in the USA) lead the pack, but with interest growing, one would expect to see offerings from Yamaha and Honda in American showrooms soon.