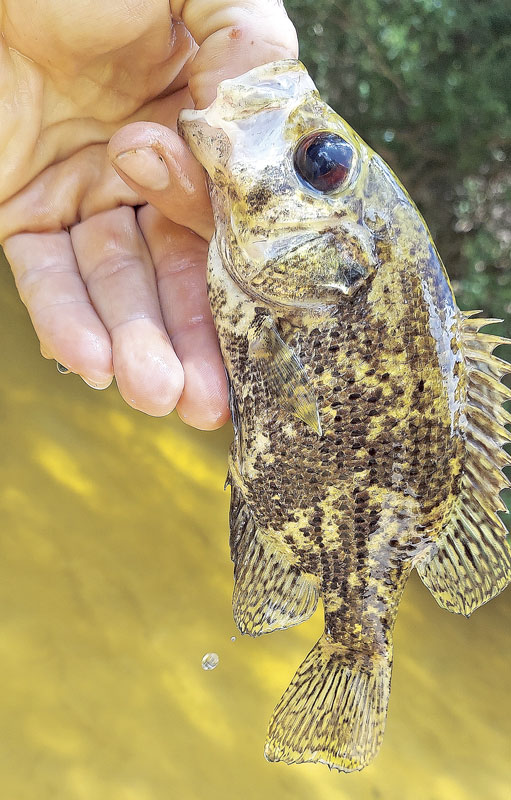 It’s no secret that Louisiana is home to a wide variety of fish.

It’s location provides access to a diverse assortment of aquatic habitat including saltwater lagoons, brackish bayous, and freshwater swamps, lakes and rivers. From amberjack to alligator gar, there’s not many fish that anglers in this state haven’t come across.

Logan Gautreaux was born in Bourg and has been fishing the waters of south Louisiana since he was 8 years old. He now resides in Folsom and throughout the years has had the opportunity to catch over 60 different types of fish that call the bayou state home.

“Darters, spotted gar, paddlefish, pirate perch, chinquapin — there’s not many fish that I haven’t caught throughout my life,” Gautreaux said.

That all changed this summer. Gautreaux was fishing the Bogue Falaya Creek just north of Covington for the usual suspects; sunfish, catfish and bass.

“Believe it or not that creek holds some quality fish, especially in the deep holes,” he said.

Gautreaux was wading in the creek and came upon a deep drop-off that spanned 20 feet along the shoreline. Using a small tube jig, he cast across the deep water to a heavily eroded bank with an exposed root system protruding from it. He let the jig sink down and and then noticed his line change direction, suddenly moving upstream. Gautreaux immediately set the hook and reeled in his catch. As he went to unhook the fish, his mind couldn’t quite process what he was looking at.

“At first it looked like a goggle-eye, but then I thought maybe it was a rock bass,” he said.

Gautreaux was familiar with rock bass from a period of time spent working in Pennsylvania. But this one was different. The puzzled angler took a few pictures with his phone and released the fish back into the clear running water.

After arriving home, he pulled up the USGS website to report the fish as an invasive species, being that rock bass weren’t native to Louisiana. He then grabbed his Peterson Field Guide and after flipping to the freshwater section, was able to match the fish to an identification photo.

For Gautreaux, finding out the species of fish he caught was just the tip of the iceberg. The angler dedicated himself to extensive research to learn more about the fish that had somehow eluded him for 39 years of his life.

Gautreaux learned that the “bass” are actually in the family of sunfish. They are native to Louisiana, Mississippi, Georgia, and Florida but interestingly enough, their numbers decrease significantly to the north.

“Tennessee seems to be the dividing line where shadow bass disappear according to my research,” he said. While these fish get harder to catch as one travels north, it seems that rock bass become more plentiful, showing a clear distinction in climate preference.”

As he continued to study the fish, he came upon a piece of information that made his story come full circle. It turns out that the shadow bass was officially given a separate species description and declared a newly discovered species in 1936 by freshwater biologist Peter Viosca. Viosca then listed the type location as the Bogue Falaya Creek.

Since his first bass, Gautreaux has since fine tuned his technique when targeting shadow bass. He specifically fishes for them in sandy bottom streams with clean running water.

“I haven’t caught any in the larger rivers where there is a muddy bottom made of silt,” he said.

As far as his set up, he uses an ultralight rod and reel with 8-pound fluorocarbon. Gautreaux stresses the importance of using fluorocarbon.

“It makes a huge difference when fishing in these creeks,” he said. “I’ve taken a glass of tap water and lowered a piece of monofilament line next to a piece of fluorocarbon and was amazed at the difference. The fluorocarbon is almost invisible.”

Since Gautreaux fishes in shallow streams, he finds it easier to walk the river rather than try an operate a boat. The Folsom angler stuffs his equipment including tackle and snacks into a backpack and sometimes ends up walking miles in one day.

“I look like a ghostbuster out there with that big knapsack on my back,” he joked.

As he makes his way downstream he looks for dark water that indicates greater depth. This is where the action happens. Not only has he pulled numerous types of fish out of these holes with a fishing pole, but he has actually used diving equipment to witness large bass and catfish hiding in the depths. Another thing he’s witnessed are a multitude of darter’s which are small goby-like fish that scurry along the sandy bottom. The fish are light brown with iridescent red and blue specks. It’s these fish that Gautreaux imitates with his choice of lure.

“I’ve been catching most of the shadow bass on small silver tube jigs with red, white and blue flakes,” he said. I find that they hug tight to structure like a root system that’s intertwined in the bank.”

Gautreaux threads the tube jig on a 1/32-ounce head and casts up against the shoreline.

While Gautreaux admits the shadow bass ranks the highest on his list of discoveries, the determined angler’s not quite done with catching various types of sunfish.

“This fish is special but it’s just a stepping stone to my ultimate goal of catching every type of sunfish that exists,” he said.

So that’s a shadow bass

The shadow bass isn’t a bass at all, but is a member of the sunfish family.

The range for these fish is limited, but there are good populations of the fish across the south.

The diet of shadow bass consists mostly of small invertebrates like crawfish when the fish are small. As they grow, the fish feed on all kinds of minnows and small fish in addition to crawfish due to their large mouths.