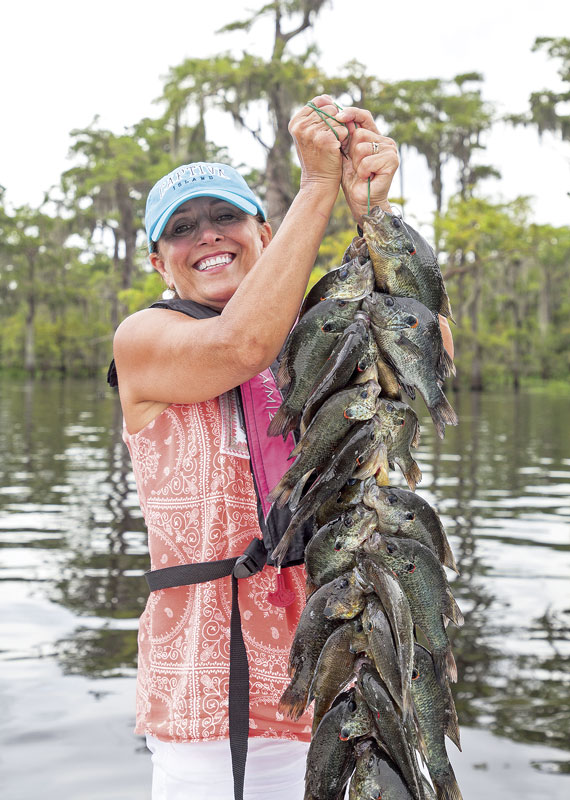 Blend of bream action is definitely the pursuit of happiness

One of the goals of the U.S. Constitution was to “form a more perfect union.”

Pretty heady stuff when you think about it. And it is something much smarter men than me were able to put in writing so we all can enjoy certain liberties and freedoms. Like fishing bream for example.

But when it comes to a more perfect union, I tend to think of simpler things. Like the Union Oilfield Canals located east of Lake Palourde and southeast of Grassy Lake. What’s more, fishing those canals for bluegills, redear sunfish (aka Chinquapins) and longear sunfish. Now that’s as perfect as it gets come late spring and early summer around these parts.

The first time I fished the Union Oilfield Canals, I was with a local tournament bass angler by the name of Gerald Foulcard. Foulcard is a lifelong resident of St. Mary Parish who grew up in Franklin and now lives in Patterson.

There’s not a bass angler locally who doesn’t know him and probably far more homeowners. Up until his recent retirement in 2021, Foulcard was a lineman supervisor for CLECO Power Company for over 32 years.

Gerald and I had been bass fishing one Saturday in June several years back and weren’t having much luck. We were in the Bluebird Canal below the Intracoastal Canal south of Gibson for much of the morning. Not to be denied, on our way back to the R.J. Marcell Memorial Boat Ramp (Amelia Boat Landing) under the LA 182 Bridge, Gerald wanted to make a quick diversion.

We passed up the landing and headed north towards Lake Palourde. Unlike me, Gerald is a bass angler first, where I prefer fishing for bream. The first thing I noticed when we got in the canals, was how many guys were perch-jerking.

It wasn’t long before we were trolling and tossing spinnerbaits in one of the oilfield canals when we started catching bass. It appeared the region had what fish biologists refer to as having proper “trophic levels” of nutrition. In other words, the fact there were plenty of bass meant there was plenty of food, with shad and bream at the top of their prey list.

When I questioned Foulcard about it he nonchalantly said, “Yeah, I’ve caught plenty of bream, sac-a-lait, goggle eyes, and chinquapins in this area.”

That was all I needed to see and hear, where annually the Union Oilfield Canals is now one of my go-to locations.

Recently, my wife and I made a Saturday morning trip to the Union Oilfield. The first canal we came to, was a dead-end canal. I made a quick assessment looking for shallow water 2 to 5 feet in depth, clear to stained in color, and something that had cover for protection.

It’s a dog-eat-dog world out there and bream are near the bottom of the food web. Close cover is an absolute must for them to survive. I noticed a tree had fallen out into the water about 40 feet. Its branches provided perfect cover in the shallow water. Yes, we got hung up a time or two but, it was worth it.

Cover can be in the form of logs and storm blowdowns that provide structure for them to escape predators. In many places subaquatic vegetation (various grasses) is the predominant cover.

Just north of the Union Oilfield Canals in places like Grassy Lake, sometimes grass grows so thick there is no navigating it with a standard outboard, plus it’s difficult to fish. When this is the case, anglers will usually fish the outer edges of the grassy cover or look for a hole in it.

Other important cover to consider are small drains.

Foulcard said, “I look for little drains and ditches that empty into a main bayou or canal. Usually, fish will congregate near these openings. I’ll also occasionally fish rip-rap used to plug pipeline drains. For some reason panfish will hang around the edges of this kind of structure.”

I have a 7-inch rule for my boat. No matter what species of bream we’re fishing, red-eared sunfish or bluegills, they must be at least 7 inches long. But, I guess some rules are sometimes made to be broken for the right reasons. A few 6-inch fish wound up in the box at my spouse’s insistence, where she noted that they were plenty chunky enough.

When it comes right down to it, it’s more or less a cleaning thing for me. I know that I can get a reasonable size fillet to fry out of a 6-inch to 8-inch fish. Most of the bream we caught easily fit into that self-imposed slot. 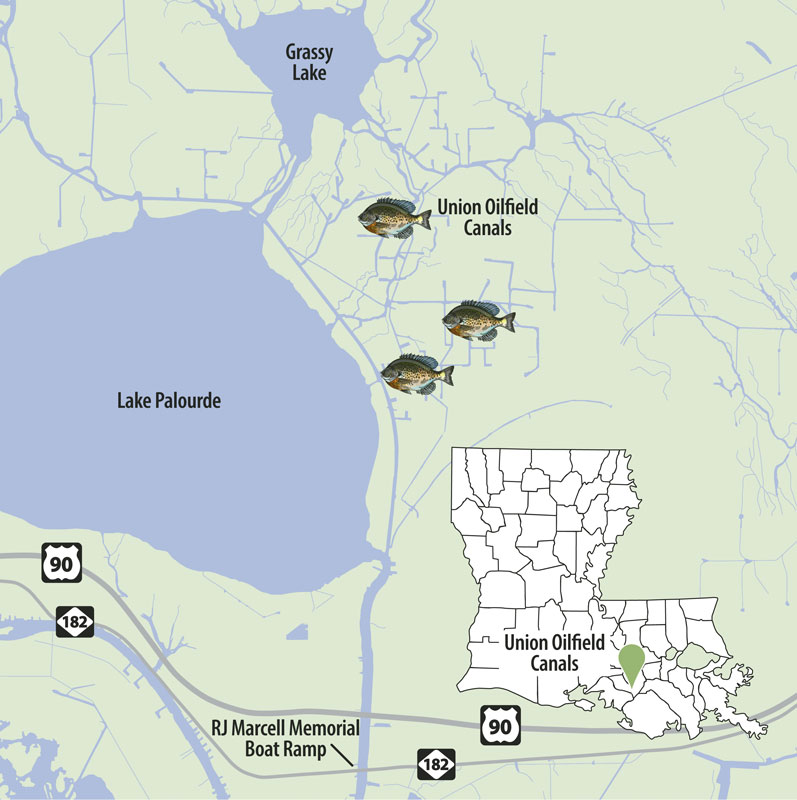 There are two methods to bream fishing. One is using artificial baits. And the other is keeping it simple by using live bait. Foulcard is someone who prefers to fish bream using small lures.

Foulcard said, “I use grub-type beetle spins without the split tail, and I mostly use the H&H beetle spins with the smallest blades they make. The colors I use are yellow with black dots, chartreuse with the black lines, orange, crawfish and my favorite, black with chartreuse lines.”

Foulcard said he also likes to use beetle spins without the blades by pitching them into cover and jigging them.

“Now you get hung up a lot with this method,” said Foulcard, “but you can reap the benefits with a bountiful catch. Also, a lot of people don’t do this, but I do. Sometimes I’ll cast that beetle in the middle of canals and let it fall. I’ll reel it in slowly keeping it as close to the bottom as possible. Without the blade, it works great.”

By contrast, nothing works better than live bait when it comes to bream, with red worms and crickets being the most widely used baits. If there are bluegills and chinquapins around, they’re going to eat wiggly creatures.

Bream fishing is also pretty much a small hook, small bobber, and small weight thing. I like to use a Thill balsa float and No. 6 perch hook, with a single split shot fixed 6 to 8 inches above the hook.

As far as weight, use just enough to keep the float perfectly vertical. When it’s right you can see and feel the slightest touch by even the most finicky bluegill.

When young kids are involved, I attach the cheap round plastic bobbers. Kid’s will get hung up and more likely than not you’re going to lose some tackle in the tree limbs when it’s all said and done. So, be prepared to re-rig quite often when children are bream fishing with you and just take it all in stride.

When it comes to eating, fresh bream is hard to beat. Some people like to gut, behead, scale, and score their fish and fry them on the bone. I prefer filleting all my fish.

Typically what happens at the Flores house is when I’m picking up gear and washing down the boat, my wife is usually frying our fish for supper. She usually uses Louisiana Seasoned Crispy Fish Fry or Zatarain’s New Orleans Style products, but you can also use regular cornmeal too and simply season it to your taste.

One of the nice things about the Union Oilfield canals is they’re not far off the beaten path. They’re also 10 minutes give or take from the Amelia Boat Launch. When it comes to a more perfect union, nothing could be more perfect than fishing bream in this area.