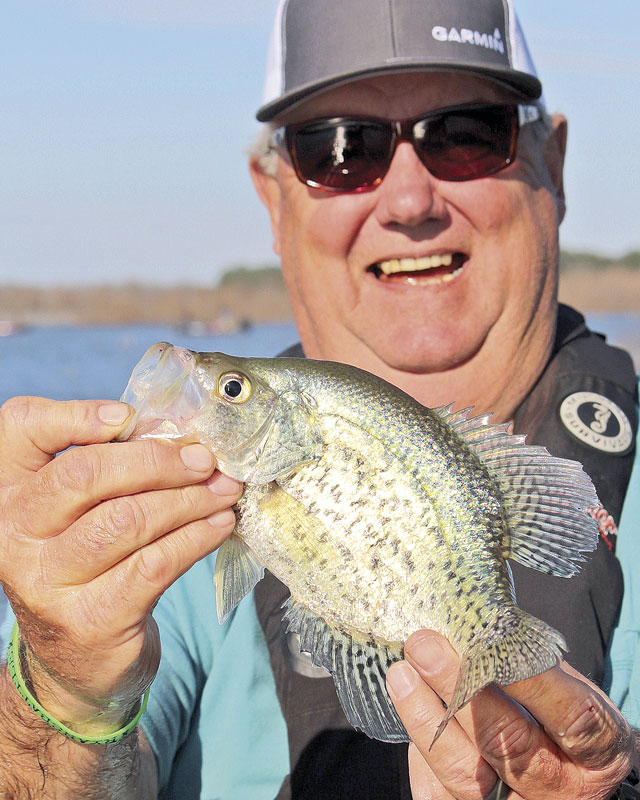 Popularity of the sport is making fishermen adjust for wary slabs

Nobody knows more about the ten-fold increase in fishing pressure on crappie than the crappie themselves.

Angler after angler is quick to point out that crappie can no longer be caught day in and day out by simply dropping a bait close to them anytime, anywhere. The crappie have become fairly aware that they are on someone’s radar.

This time of year, they’ve already taken a “beating” watching lure after lure come swimming or bouncing by. The little ones that gobble up anything that catches their fancy have already been caught.

The mid-sized ones are wary, but the big ones that qualify as real slabs, well that is a different story. They are really wary and you better do everything you can to entice them to bite your bait. To say the least, they are skittish. That’s a term normally relegated to horses, but it fits crappie that are excitable or easily scared as well. Crappie have become leery of baits, trolling motor noises, even footsteps in a boat. Anglers can see it on this new-fangled live radar. The boat approaches and for no apparent reason, a big slab swims off screen or sinks to the bottom.

Whether you fish one of the state’s big reservoirs or one of the smaller lakes and rivers, you can find that where there might have been a couple dozen anglers after crappie 10 years ago, now there are hundreds. And they fish all year long.

This increase in fishing pressure has changed the way crappie react to noises, lures and changed the way some fishermen fish. The new electronics have played a huge part in fishermen understanding how crappie act. And that knowledge can help you catch more fish, whether you have one of the high priced units or not.

Here’s what you can do about it. First, admit that this is a real thing, said crappie angler Steve Adams of Farmerville. Then, pay close attention to what you are doing and adjust.

“What’s happening is that when fish feel the pressure, they often move off the structure they have been holding on,” Adams said. “The smaller ones will pull in tight to structure, but the really big ones will scatter out. I’ve seen them be up on a ridge or a high spot, then a lot of fishing pressure hits and they just back off several hundred yards and suspend. The big ones don’t hang out in bunches. They are loners, especially when the pressure is on.”

What Adams said works best is just put your foot on the trolling motor and cover water.

“You just have to search for them,” he said. “Obviously it’s better if you have live sonar, but if you don’t, just get your baits in the water and move around. I have started looking as far out in front of the boat as I can, sometimes 40 to 50 feet on the sonar. When I see one, I just let the boat drift up slowly. If you get too close, it’s over unless the bite is really on.”

There have been some pretty dramatic developments because of this, especially among competitive anglers. Special poles up to 20 feet long have hit the market, but they are a handful especially over a course of several hours. Some anglers are also putting remote control trolling motors on the back of their rigs so they can stop and hold the boat without the trolling motor being close to the fish. Anglers are also using their drift paddles only when they have to just to keep from disturbing fish, Adams said.

“We never realized this until we had live sonar, but big crappie will sink right down to the bottom when they feel pressured,” he said. “We’ve caught them in 20 foot of water right on the bottom and even after we reel them up, they’ve got mud on their bellies. Isn’t that something? Some folks are getting good and making them bite on the bottom, but that takes a lot of practice and there isn’t a lot of sharing information on how they do that.”

When fish are biting in certain areas, sometimes you just have to go there with everybody else. It’s a choice fishermen have to make on a regular basis.

“Look, there’s no doubt that if you see 30 boats all piled up in a certain area, they are usually catching fish,” he said. “There are some exceptions. A couple of folks might be fishing, then a couple of more come up and see what they are doing. Next thing you know, there are two dozen boats all in the same area thinking somebody must be catching them. That’s pretty funny, but it happens. But seriously, most of the time they are catching or they wouldn’t stay there.”

Adams said he has learned to pile right in there with them if it’s the spot to be. The thing you have to do is concentrate on what you are doing and not what everybody else is doing.

“You can’t catch fish trying to watch somebody else,” he said. “And normally when there is a big crowd, it is smaller fish they are catching. Most weekend anglers are just out for a good time and a good mess of fish. They aren’t interested in the two and three pounders if it takes all day to catch one.”

Baits can make a difference. Adams said when in doubt, shiners never hurt as your main bait or as a trailer. There are times the fish like smaller hair jigs and others when the big plastic baits work best. There’s no right or wrong for every situation. You just have to try and find out what the fish want to bite that day. It varies with water color, weather and wind conditions.

And no matter what you do, there are times when you can find a secluded spot, look at the sonar and see 30 fish gathered up on a bush. But before you get too excited, you have to get a bait in there and see if they will bite. Sometimes they won’t and no matter how good you think you are, you can’t make them.

“It’s frustrating to see fish there and not be able to get a bite, but don’t lose hope,” he said. “Go try some other spots and come back in an hour or two. Sometimes they’ll just turn on and you can catch a mess in a hurry. You never know when Mother Nature’s alarm clock is going to go off. That’s what makes fishing so challenging — and fun when they do bite.”

When it seems like the crappie are playing hide and seek with anglers, Adams said there’s a new popular technique that can help. When crappie get spooky, anglers resort to a technique that sounds more like baseball. It’s called “pitch and catch.”

Because fish can hear the slightest sounds and especially the whirring of the trolling motor, don’t fish right on top of the fish. Spot them on your electronics or fish brushpiles that you know the location of by stopping the boat, then pitching the bait out 10-15 feet out in front of the boat. Then just let it sink right down to where you see fish or the depth you know they are hanging out.

That allows you to get the bait to them before they see or hear you coming. It’s especially effective in the more shallow water.

“If you get right up on top of them and they are feeling pressure even in the slightest, they are going to either get up so tight in the brush you can’t get to them, or they’ll sink to the bottom,” Adams said. “The key with pitching and catching is that you have to get that bait right in front of the fish for as long as you can to entice a bite.”

If you make the right pitch, fishermen that can, hit the home run! If you don’t, you’ll strike out for sure.

Mow down the bass

This is the time of year when fishing the grass beds in your favorite lake can bring bass out of their hiding places and into your livewell. […]

CCA leads effort to take pogie battle back to legislature

CCA Louisiana is undertaking a government relations campaign targeting the menhaden fishery in the Gulf of Mexico. […]

April 21, 2022 Joe Macaluso Columns, Down on the Dock, Fishing, Newsletters

About Kinny Haddox 476 Articles
Kinny Haddox has been writing magazine and newspaper articles about the outdoors in Louisiana for 45 years. He publishes a daily website, lakedarbonnelife.com and is a member of the Louisiana Chapter of the Outdoor Legends Hall of Fame. He and his wife, DiAnne, live in West Monroe.