A widely known Raceland sac-a-lait fisherman and artificial lure manufacturer kept talking over the winter about a secret weapon coming out in the spring of 2020.

Capt. Clyde Folse’s unbridled enthusiasm stayed revved up between 5,000 and 6,000 rpm, mostly on the high end, as he anticipated introducing the lure to the public at the annual Louisiana Sportsman Show and Festival at the Lamar-Dixon Expo Center in Gonzales March 12-15. He’s had the prototypes in his hands since September, and they haven’t disappointed him.

Meet the Crappie Weapon. By now, the word probably has spread like wildfire among those who love to fish for crappie, aka sac-a-lait and white perch in many areas of Louisiana.

“I’ve caught a lot of fish, a massive amount of fish, with it already,” Folse said in late January. “I’ve had the prototype since September. I’ve been keeping it hush-hush.

“It’s about to be released in eight different colors. We will have a ton of them at the Louisiana Sportsman Show,” said Folse, who gave a sneak preview of the soft-plastic bait around the first of the year to friend Otis Taylor of Grand Point. At first, Taylor wasn’t happy as the outing got underway on Hackberry Lake. Folse, meanwhile, was on Cloud Nine.

“I was using the Crappie Weapon…. He was using a black and white Crappie Psychic Crappie Ringer. I had six before he had one. I was having goose bumps. I was thanking God. It was way above expectations,” Folse said after seeing his new bait perform against a tried-and-true lure.

“Well, I’m excited, and I’m mad. I’m sitting in the back of the boat and catching one fish and he’s catching seven,” said Taylor, 81, who asked for and received one of the prototype Crappie Weapons. Taylor tied it on and, suddenly, twice as many big sac-a-lait were going into the ice chest.

What took the cake, Taylor said, was as he was about to put away his fishing rod after the spectacular trip, Folse asked to see it and snipped the new lure off his line, guarding the secret.

Sac-a-lait fishermen everywhere will get to see the Crappie Weapon, part of a strategically planned line for Crappie Psychic a line that’s still missing one part for reasons beyond his control, according to Folse. He introduced the Crappie Trailer, then Crappie Ammo, and developed a Crappie Mag(azine) to attach to a fishing rod and make it easier to attach Crappie Ammos to the Crappie Weapons. The Crappie Mag, which experienced unforeseen delays in its production, fits in a tiny holster, but it isn’t available yet. 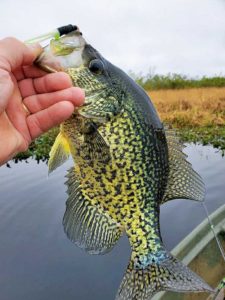 Folse designed the Crappie Weapon to make a disturbance in the water. Its body has ringed segments and bulbous eyes that add to the wobble as it falls under a cork or is tight-lined. It also has a split or fork tail, with two tails that are diamond-shaped. Where that forked tail meets the hook, add a Crappie Ammo bead and a similarly diamond-shaped Crappie Trailer and, bingo, there’s more action and color, more for the fish to see.

How long is the Crappie Weapon? Folse measured it at 2¼ inches long.

For more information about The Crappie Weapon and other Crappie Psychic products, visit thecrappiepsychic.com or call 985- 790-0862.

Lake D’Arbonne has plenty of shad to attract crappie and the shad start gathering up on the edges of the main channels this time of year. […]