“February is the annual transition when they’re moving from their winter haunts to their spawning areas,” Thompson said.

When fish are holding to the channels, Thompson said jigs and minnows are the ticket to success.

But when the water temperature moves into the upper 50s, it’s time to gear up for big fish — and that means a welcome change of tactics.

“When the fish start moving up to spawn, what you can do is throw a Road Runner,” Thompson said.

Well, “throw” might be too restrict a word: Many anglers also troll the lures in likely crappie hotspots.

This is the time Thompson lives for.

He said the key is to start at the south end of the lake in the creeks (i.e., Toro and Yokem) with hydrilla.

“You’ll find sac-a-lait in 6 to 10 feet of water, and you’ll catch them over the grass,” Thompson said. 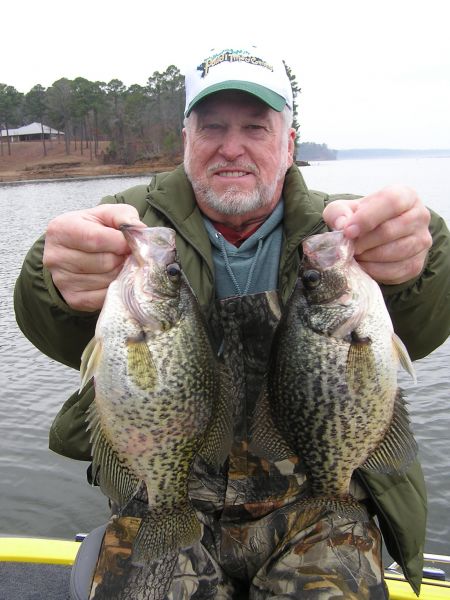 As the winter breaks and allows water temperatures to elevate farther up the lake, Thompson said he’ll just move with the fish until he gets to 1215 area — that’s the farthest north he generally fishes, but he said the pattern will hold all the way up the lake.

He said anglers will troll slowly, pulling Road Runners over the grass. His personal approach is to troll until he catches a fish and then switch to casting.

“Trolling is a way to locate fish,” Thompson said. “Once you catch one or two, you can go back and cast that area.”

And he said fishing Road Runners isn’t a numbers game, but it’s a great way to catch huge crappie. And he’s talking bruisers.

“You can get bit 25 times a day, and it’ll wear your arm out,” Thompson said.