Covering water and watching the speed limit are keys to success when crappie scatter during the oppressive summer heat.

Thoughts of summertime crappie tactics often center on reaction-bite strategies — crankbaits, vertical jigging and the like.

However, before the warm season concludes you may find occasions for employing a more-relaxed presentation that could deliver those hard-to-get bites while offering the warm-up runs that’ll help you transition into the forthcoming fall season.

Spider rigging, sometimes called “slow trolling,” gets its name from the multi-rod setup sprouting from the bow. Crappie pros and spider-rigging experts Mark Williams and Doug Cherry do this a lot in southern waters during the autumn months, but Williams said he won’t hesitate to hop into one of his twin bow seats and split the rod-watching duties during the summer.

“The key when the fish are scattered is covering as much water as you can to come across those scattered fish,” Williams said. “Changing water conditions sometimes will scatter those fish off of cover and that’s when I’ll go to covering water and find them.”

Once the fish start transitioning from summer to early fall patterns, Williams looks to creek channels, where crappie will pull and use the shallow contour lines as travel lanes to chase shad.

Cherry said he and his partner spider rig with various combinations of Strike King Slab Hammer Tubes and Jokers on No. 2 hooks or light jigheads — both might include live minnow enhancements.

A standard arrangement comprises a three-way rig with the main line tied to the center ring and twin leaders sprouting from the top and bottom rings. The top leader runs a bait about 6 inches from the swivel, while the bottom bait runs at 16 inches.

“You always want a hook on the top leader because a jig will (continuously) sink and tangle the other line,” Cherry said.

For maximum rig separation, Cherry rigs a 3/8-ounce egg sinker on his bottom leader about a foot ahead of the 1/8-ounce jig. This gives him a total weight of ½-ounce on that bottom leader, while keeping the actual bait presentation sized appropriately for crappie.

Wrapping his sinker four times on the leader keeps the weight in place during the motion of deployment.

“You don’t want that weight sliding down on top of your jig — you want that minnow to have some room to swim around,” Cherry said. “I’ve tried it with two and three wraps, and the weight slides. With four wraps, it stays in place.”

To maximize a hot bite, Cherry suggested pre-making multiple rigs and wrapping them in groupings around a section of pool noodle. When the crappie are snapping, he said, this spool of ready rigs will prevent the time-killing delay of retying the occasional snagged rig.

Some days, the crappie will bite a handful of colors, while other times see them strongly inclined to particular looks. Cherry said he and Williams like to mix up the spread to give the fish a menu from which to choose.

“You may want to mix your skirts up and see what they’re biting,” said Cherry. “If we have eight rods out, we may have 16 colors (in our spread) until we figure out which one they like, and then we may go with that color on all of our rigs.

“We adjust the skirts to the water color: The darker the water, the darker the jig. But always use chartreuse. In dark, muddy water, we’ll use a purple body with a chartreuse skirt, or black/chartreuse.

“Once we get into clear water, we go to the blue/white, yellow/white, chartreuse/white or a solid chartreuse.”

Cherry calls it the “bite speed” — that ideal rate at which crappie want to see their meals moving. Dial in this number and you’ll walk your baits right into those waiting mouths.

The exact speed will vary day to day, but Williams noted that close attention to your GPS will show you when strikes occur, and this facilitates the dialing-in process.

This, of course, hinges on precision trolling-motor control.

“Trolling-motor control is the most-important part of spider rigging because you are presenting your bait with the trolling motor,” Cherry said. “With vertical jigging with one pole in hand, you can (account) for different movements like the motion of the boat with your arm.

“But when you have a pole in a stationary arm, the only thing controlling the speed of that bait is the trolling motor.”

But more often than not, a glacial pace is what you want.

“Most of the time, slower is better,” Williams said. “I’ve found that 1 to .3 mph is the general speed range, but you can move up to .5 to .6 mph, and that will give those fish a sense of urgency.

“Most of the time, I don’t think you can go too slowly when spider rigging.”

When crappie are feeding, they might hit a jig or a skirted hook, but everything tastes better with a Missouri (aka Arkansas) minnow on the back.

Crappie pro Doug Cherry said he’ll carry 2 pounds of minnows on an average trip. He might not end up using them all, but it’s better to have them and not need them than to run out of fresh ammo.

Hooking minnows through the lips (bottom-to-top) keeps them securely fastened and irritates them into constant activity, but doesn’t overly stress the baits into quick demise. 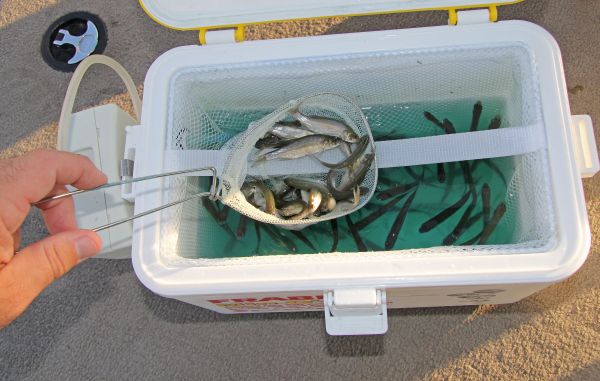 To further bolster his live bait’s potential, Williams will scoop a couple dozen minnows into a smaller Frabill aerated cooler that he keeps close to the bow for quick access. Segregating the “active” team from the larger group benefits anglers and baitfish.

“This allows me to operate (more efficiently) without stressing out all the baits in the main cooler,” Williams said.

Cherry said that, while he and Williams mostly use the small to medium-sized minnows, he’ll occasionally carry a few of the giant 4-inchers known as “sardines” and add one to the top arm of a double rig. It’s rare to find a crappie that can eat such a chunk, but the vibration and intense display that one of these whoppers makes will draw attention to the smaller, more-manageable baits.