There are a growing number of jighead options for crappie fishing, but which one is right? Here are some expert thoughts to help you decide.

But, while jigheads might be far from fancy, they’re also far from inconsequential.

The ball-head jig sees the most action, and for good reason.

Designed to fall straight, troll well and even cast nicely, it’s the shortstop of crappie fishing.

Toledo Bend Guide Jerry Thompson often fishes his ball-heads under a strike indicator (aka cork) over brush piles in the spring, as well as bridges in the late summer/fall period when crappie start staging in their autumn feeding areas.

“You cast toward the pilings and you wind up fishing it vertically,” Thompson explained. “When the fall migration starts, one of the better ways to use a ball-head is to troll with a 1/8-ounce jig in 15 feet of water.”

Thompson likes this style for spring fish staging outside their spawning areas, but these flashy attention-getters also get the job done when those fall crappie hug the bridges.

These attention-getters are also effective at stimulating lethargic fish during the depths of summer and winter. Often, you just need to trigger one crappie to bite and then the inherent feeding competition of schooling fish kicks in with more interest.

Whether underspins actually stimulate appetites or simply annoy lazy fish into a kill response — well, who cares? You get one crappie to bite and you’ll likely get several more to follow.

Complement these two crappie stalwarts with a few diversifying options:

For trolling and tight lining, Thompson prefers a 1/8-ounce jig, but around bridges he typically uses 1/16-ounce ball heads — in accented form: When working those pilings without a cork, Thompson crimps a 3/0 split shot to his line about 10 inches above a jig dressed with a tube or a shad like body.

Not only does this aid his casting on windy days, but it also mimics a predatory relationship likely to trigger something with an even bigger appetite.

“I like that in most of my applications, because it seems to look like the jig is chasing something,” Thompson said. “We tend to do a little better with that split shot in front of the jig.”

Thompson downsizes to a 1/16- to 1/32-ounce ballhead for jigging shallow water of 2 feet or less, or when he’s fishing close to docks and other structure.

The key here, he said, is balancing a light presentation with efficiency

“I like to fish a little faster, and a 1/32-ounce jig can be a little harder to fish, especially if you have some wind,” Thompson said.

On the other hand, dock-shooting innovator Wally “Mr. Crappie” Marshall goes right to the small stuff when he’s firing his offerings under the planks and platforms.

His 1/32-ounce Strike King Mr. Crappie Jig with a Shad Pole body skips better and allows for a longer presentation.

“You want that jig to skip up under that dock and have a slow fall through the water,” Marshall said. “Crappie are usually looking up, and if the jig falls past them too fast, they won’t see it.”

Here are a few parting notes to complement your crappie jigging game:

Some prefer the simplicity of plain, unpainted leadheads, while others try to match head color to plastic bodies — or at least attain a general coordination or contrast.

Much of this matters more to fishermen than fish. But there are a couple of exceptions worth noting.

First, with lethargic, spooky or otherwise persnickety crappie, those unpainted heads might help by toning down the look.

Toledo Bend guide Jerry Thompson likes fluorocarbon for its abrasion resistance and stealth, but he takes no chances when targeting big fish like those known to roam Toledo’s depths.

“I go no less than 8-pound line because you usually get hung up a lot (with various jigging presentations), and we have some big old sac-a-lait on this pond,” he said. 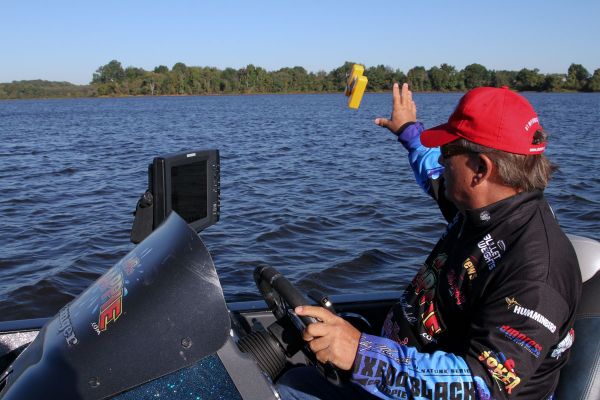 Wally “Mr. Crappie” Marshall advised keeping several weighted buoys handy for marking those sweet spots — and that might be the ones you’re looking for, as well as the unexpected stake bed or brush pile some sneaky soul planted way out in the middle of nowhere.

Along that line of logic, Marshall also stressed the importance of astute observation coupled with an optimistic imagination.

“You might come across what looks like a single stick breaking the surface, but if you look closer, there’s probably an entire tree lying beneath the surface,” he said. “That one little stick might lead you to a pile of crappie holding on that structure.”

Dock shooting has become one of the most-entertaining and productive ways of presenting jigs to crappie. However, the combination of a flexed rod, a tight line and a sharp hook very close to your fingers brings tragedy way too close for comfort.

Now, with proper form, your fingers remain clear of the jig’s trajectory on the release. But fingers slip and a rocking boat means accidents loom ever possible.

We can never be too safe, especially when teaching young anglers, so the folks at Bobby Garland introduced the Dock Shooter Pull Tab — a biodegradable tab dressed with a glitter finish that slips over the point of the jig hook for a safe grip that always keeps fingers behind the danger zone.

This Dry Prong hunter has taken a lot of trophy bucks out of woods where anyone can hunt. Here’s how he separates himself from the pack. […]

The Ouachita River has become one of the go-to crappie holes in north Louisiana. Here are two things that are key for river fishing in September. […]