Think spider-rigging for crappie is high-tech? Then you’ll be blown away by the new-age tactic of using planer boards and big crank baits to dredge up finicky panfish.

Some folks say crappie are the new bass.

For decades, crappie fishermen have pretty much been cane pole-and-shiner guys, or maybe jig polers with double-rigged lures.

Bass fishermen hace all the fancy equipment and techniques.

In a nutshell, “crappie are the new bass” just means crappie fishermen are now as high-tech and geared-up as bass fishermen.

Maybe even more so.

After making a trip chasing crappie with the father-son duo of Steve and David White, who could argue?

Perhaps it was first noticeable when Steve backed his $65,000 crappie-rigged Ranger 621 VS fiberglass rig into the water and I noticed the high-end electronics all around the boat.

Or maybe it was the remote-controlled trolling motor with the controller on a lanyard around Steve’s neck.

Maybe it was the extra 9.9-horsepower “kicker” outboard for trolling in windy conditions.

But when he started pulling out $150 jig poles with $150 counter reels, reached into one of three large tackle boxes full of more crankbaits than Cabela’s sells in a day and then started hooking them up for slow trolling, it was a pretty safe bet to say this was not your daddy’s crappie fishing.

But there was more.

Steve pulled out his cell phone and opened the “Precision Trolling Data” app on the Internet, which instructed him that to keep his Berkley Flicker Shad 5 at 8 feet deep he needed to let out 74 feet of his 10-pound XT fishing line.

That depth was where the fish were showing on the color screen of the Lowrance HDS graph. Thus the need for a counter reel.

OK, class: Any questions? Welcome to 2015, where man is boldly crappie fishing where no man dared go before.

The final proof of all this effort was in the pudding.

Before the duo could even put out half of the eight trolling rigs, one of the red flags on the planer board running out to the right of the boat about 50 feet dropped out of sight, indicating “fish on.”

I didn’t mention the planer boards? Well, I will.

Steve and David love crappie fishing, and their favorite lakes are in North Louisiana.

They actually live in South Arkansas, just north of Lake D’Arbonne, but they can make the drive in their sleep to “our favorite lake” according to Steve, a physical therapist by weekday and crappie doctor by weekend.

They also ply their trade on Caney Lake, Claiborne Lake, Toledo Bend and any other Louisiana waters loaded with crappie and that provide good open water fishing.

Their techniques will work in any open body of water with suspended crappie.

And the use of crankbaits is a big part of their arsenal.

For the record, crankbaits like Bandit 200 series lures and Berkley Flicker Shad are two of the duo’s favorites. Usually reserved for bass, they catch crappie equally well.

Now, about those planer boards.

These crappie chasers started using planer boards for a very simple reason: They often fish in crappie tournaments, and in one they thought they were doing pretty good in they got their fish tails kicked by someone using this technique.

Planer boards actually facilitate spreading crankbaits out on both sides of the boat during trolling, not just behind the boat like usual.

The decision of when to use planer boards is also simple: When the fish are skittish or when they are hard to catch on traditional spider rigs or by long-lining, the planer technique gives you another good option.

And an edge on the crappie and the competition.

“Crappie aren’t dummies,” Steve said. “A lot of times, when they are suspended 6 to 8 feet deep in 14 to 18 feet of water, they will react to a boat passing by using regular trolling techniques, and the fish ease out to the side of the boat’s path above them. When they do that, they move away from the bait presentation.

“With planer boards, your baits are carried out to both sides of the boat and you catch them there. The theory is that the fish that have moved are looking to come back to where they left from, and that’s when they see the bait.”

Of course, the first step is locating where fish are congregating.

“You use your electronics or just cover a lot of water to find the fish; then you use the planer boards to increase your chances of catching them,” Steve said. “It’s a proven technique that is growing in popularity much in the same way as spider rigging has the past four or five years.

“I’ll bet that a lot of people who turn their nose up at it now will be doing it themselves in five years, just like spider rigging.”

The most-important part of the technique is being open-minded and giving it a try.

“Except for the spawn, when crappie are finicky, they often like larger lures,” David said. “The crankbaits also resemble the look and action of shad, and that’s what these suspended fish feed on.”

Unless they congregate near tops, suspended reservoir crappie can usually be found scattered out from post-spawn through the summer and on into the fall as they get in pre-winter patterns.

In Louisiana, prime time for this “secret season” is September and October, and sometimes all the way into November.

“The most-important keys to cranking up crappie are, first of all, getting the bait to the right depth,” Steve said. “Second, you have to go the right speed. Normally this time of year that is between 1 and 1.5 mph. That’s where the remote-control trolling motor comes in handy: You can set a course and maintain it at the proper speed.

It isn’t unusual for the two anglers to put out six to 10 poles, usually two straight behind the boat and four to six out to the side with planers.

“We get a lot of strange looks,” David said. “Some people ask us, ‘What are you Yankees doing?’ But we just laugh.

“We are just doing what everybody else is doing — trying to catch crappie.”

And, indeed, they do.

Gearing up to use planer boards for fall crappie

Steve and David White have their own ideas about the equipment needed for catching crappie on crankbaits and extending their reach by using planer boards.

They’ve combined that with advice from some of the other top crappie fishermen in the South to come up with a pretty detailed list of what you’ll need.

For cranking, they choose 8-foot, medium-action Cabella’s Downrigger or St. Croix Eyecon trolling rods. They are sturdy and have a good feel with the crankbaits (and planers) attached.

Their reel of choice is usually the Abu Garcia 6500 LC (the LC stands for line counter). Knowing how much line you have out is a critical element to keeping lures at the proper depth.

They use softer colors on dark days and bright, shiny colors on bright days.

There are several models of planer boards on the market. The Whites prefer the Off Shore Tackle OR-12, which pull harder than smaller boards and get the lures farther out from the boat. They also handle multiple crankbaits well.

And they are American made. 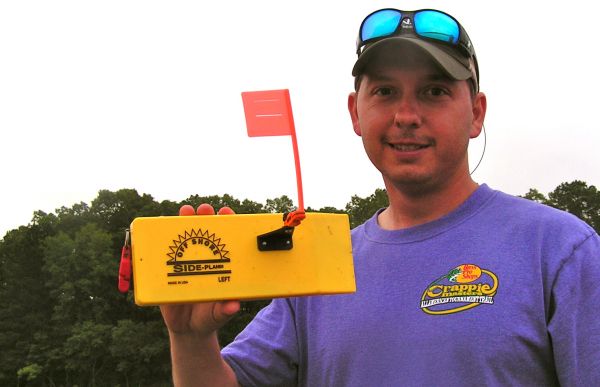 The Whites use their iPhones to help, too. Yes, there’s an app for this: The Precision Trolling Data app is a must because it allows you to calculate how far out to let line for each type and brand of crankbait to keep it at the desired depth.

That knowledge is combined with information from their Lowrance HDS-10 electronics to put them right on the fish.

The HDS-10 dual screen allows them to see where they are on the lake, as well as the structure below and around them — and, oh yes, where the fish are.

They generally rely on their remote-control Minn Kota Terrova for trolling power, but on windy days and on full days on the water, they’ll use the specially designed Mercury 9.9 outboard for more power.

How to setup planer boards with for crappie fishing

The absolute best way to learn how to use planer boards for chasing cranky crappie is to do what Steve White did — find somebody to show you.

But if you can’t do that, there are several online videos that discuss this growing fishing technique.

The first step is to get all the right equipment, and the second is to store it in an orderly fashion where you can find it all and put the outfit together.

The third step is to get on the lake and learn how.

“The very best advice I can give crappie fishermen about trolling with crankbaits and using planer boards is to just give it a try and don’t give up on it,” White said. “Experiment. Start with just a couple (of planer boards) and learn how (to use them); then you can add more if you want.

“If you put rods out and are fishing at certain depths with no fish, try something different. The same with colors: Change colors or types of lures. You will find something that works.”

Hooking up planer boards sounds complicated, but you catch on once you do it a few times.

First, find an area with some fish and figure out at what depth most of them are suspended.

Then use the Precision Trolling Data app to determine how much line to let out on your bait. Put the lure as far from the rod as you want to troll, and then hook the back clip of the planer board to the line going to the lure. 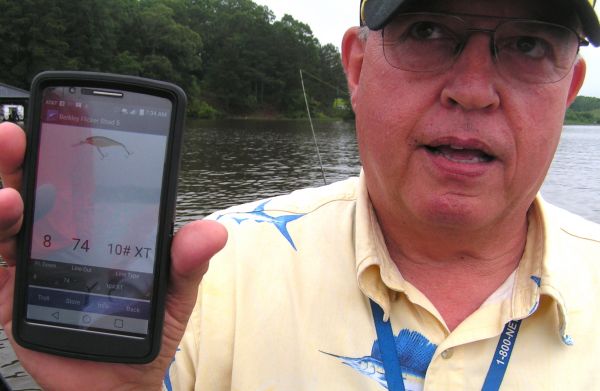 The more line you let out, the farther the planer will take the lure from the boat.

It’s obviously not a technique you can use in crowded areas, or in stumpy or brushy areas. You can troll over bottom structure, but you have to ensure your lures are shallow enough not to get hung up.

When you get a bite, the flag on the planer will drop down. When that happens, remove the rod from the rod holder and give it a quick pop.

That frees the line from the front clip and you are on your way to reeling in a fish.

Set a Trap for September bass

Louisiana’s own Rat-L-Trap really shines when fall largemouths start to gang up and follow shad. One pro shares his tricks for luring bass into a trap. […]

Bass pro Greg Hackney of Gonzales likes to go with smaller artificial lures in September. He talks about his three co-favorites. […]

Don’t pass up small-lake or pond fishing; it can be very rewarding. They provide plenty of good times for the savvy angler. […]

About Kinny Haddox 350 Articles
Kinny Haddox has been writing magazine and newspaper articles about the outdoors in Louisiana for 45 years. He publishes a daily website, lakedarbonnelife.com and is a member of the Louisiana Chapter of the Outdoor Legends Hall of Fame. He and his wife, DiAnne, live in West Monroe.