If two fishing rods are better than one, how ‘bout 12. Learn the two most-popular techniques for trolling using multiple rods.

With the promise of the coming spring, both crappie and fishermen are preparing.

It’s fairly easy for slabs: wait until the water temperature is right, then move to the bank. Anglers have choices, the biggest one being whether to fish with a single pole or involve multiple-pole strategies.

Multiple-pole strategies involved two main techniques: tight-lining and long-lining, also referred to as pushing or pulling. Both involve multiple rods and rod holders, and from above, they give a boat a water bug-like appearance. The boat positions the baits or lures; you watch the rod tips to detect bites, then lift the rod to set the hook.

Anglers tight-lining normally have their rods around the bow of the boat, and they use relatively heavy weights to keep lines vertical. Long-lining has rods near the stern, pulling baits behind the boat.

“It’s actually pretty simple,” Capps said. “From the fish’s perspective, he’s down there hanging out on a brush pile or a stake bed or hanging on the edge of a creek channel, and suddenly, here comes 16 baits right in his face.”

The benefit of tight-lining is absolute depth control. Because the line is vertical in the water column — thanks to the weight — anglers can dial in the depth of baits.

Tight-line trollers typically don’t move their boats much faster than about .5 mph. Some will use heavier weights and bump up their trolling speeds in order to cover more water in less time, but the basic idea is the same. 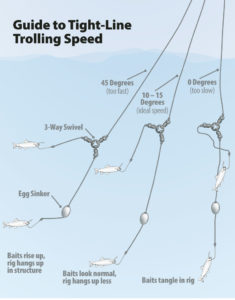 According to Coleman, tight-line trolling works best when the boat is following a known line, such as the edge of a creek channel or river channel, and the angler is targeting the drop-off and structure related to it. Crappie use contour changes when traveling from place to place, so tight-lining along a contour line is a great way to intercept fish.

“When we first started using GPS, Ronnie and I would place a waypoint on the GPS whenever we would catch a big crappie,” Coleman said. “At the end of the day, whether we were trying to follow the creek channel or not, most of the biggest fish came off the drop. That changed a lot about the way we trolled. Now we almost always follow the contour line.”

It’s hard to argue when long-lining first became popular. Fishermen have been trolling hooks behind their boats for ages. The advent of long rods to space out offerings and give crappie a variety of baits to choose from helped long-line trolling become a staple tactic for many.

Rod Wall of Ninety Six, S.C., fell in love with long-line trolling and said it’s his go-to tactic anytime crappie move from one pattern to the next.

“Long-lining works best when fish are in transition,” said Wall, a successful tournament crappie pro. “Long-lining also works better when crappie are relating to roving schools of baitfish than when specifically relating to structure.” 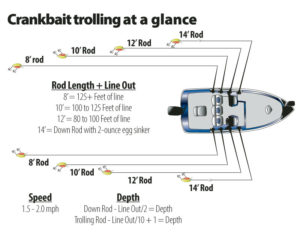 Like anglers who tight-line troll, long-liners may follow a contour line, but they most likely will be trolling the expanse of a flat. This allows the angler to cover more water as the boat speed of long-liners is twice that of tight-lining.

“Crappie will follow a contour line like a creek channel, and that’s a great place to look for them, but active, feeding fish are often be all over a flat chasing baitfish. That’s the best situation to find crappie when you’re long lining,” he said.

The depth of presentation when long-line trolling is a function of boat speed, the amount of line out, the weight of the jig and line diameter. Each plays a part in how deep jigs swim and whether you reach the level the crappie are suspended at. Wall referenced trolling a 1/16-ounce jighead pulled on 6-pound line the distance of an average cast — 40 to 50 feet — behind the boat, where the variable is boat speed. At .7 to 1.2 mph, baits will reach depths of 6 to 10 feet.

“To be good at depth control means you spend a lot of time pulling jigs,” said Wall. “Find a 10-foot flat with a level bottom, then experiment with different variables to find what combination would put you occasionally skimming bottom, then work from there on works best in your boat, your baits, and your setup.”

Jigs are not the only baits that can be trolled for crappie. Many anglers have found success replacing jigs with shallow- to medium-running crankbaits when trolling, one of them being Kent Driscoll, a pro-staff member for B’n’M.

“That’s your basic setup,” he said. “You’re going to want to vary your speed from 1.5 to 1.7 to 1.8 — sometimes faster if you can get away with it; sometimes slower if the fish are in a negative mood. You just have to vary speeds to figure out what they want.”

The depth a crankbait runs is a coordination of variables, including the amount of line out, the working depth of the crankbait and boat speed. Driscoll usually trolls at 1.5 mph and 2.0 mph, using his variable-speed trolling motor. Such precise graduations in speed require the use of a GPS-enabled electronics system that will measure speed to the tenth of an mph. 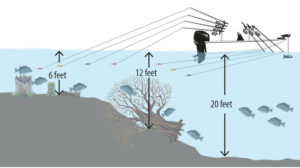 Driscoll said that anglers trolling crankbaits will catch the lion’s share of crappie by targeting suspended fish. In order to target crappie suspended at a certain depth, he uses a line-out formula. As an example, If he wants to target fish that are holding 12 feet deep, he lets out 110 feet of line. His formula is:

Anglers often add weight to trolled crankbaits. Using a 2-ounce weight in front of the bait, Driscoll doubles the line out for the depth he wants to fish. To reach 12 feet, he lets out 24 feet of line.

“Some days, the crappie want the bait slower, and some days, they want it a little faster” he said. “Covering as much water as possible in order to find willing fish is another secret to the formula. When you get those variables figured out, you can really wear some big crappie out.”