The catfish lake that south Louisiana anglers know and love is in Lafourche Parish, more than 100 miles from the Pointe Coupee Parish town of New Roads.

However, those who have launched from New Roads and the surrounding area to fish False River this spring and early summer understand why the Central Louisiana oxbow could easily be renamed Catfish Lake.

It could also be called giant bluegill and chinquapin lake, too.

All spring and summer, fishermen have been finding abundant channel, blue and flathead catfish across the lake. Often, those anglers are searching for bluegill and chinquapin, aka lake runners, shellcrackers, redear sunfish, and end up catching 20 to 30 or more catfish mixed in with big bream.

And the bream rival and exceed the size of those in more famous panfish haunts like Lake Verret and Henderson Swamp.

Fishing for and finding catfish has been easy. All one needs is an adjustable or sliding cork, a split shot and a long-shank panfish hook and a bucket of worms. The fish have been holding on a variety of structures including bulkheads, docks, shoreline riprap, brush piles, drop-offs and the north flats gravel beds.

Early morning catfish have been mixed with bass along bulkheads, gorging themselves on the lake’s extraordinary shad population. As the sun gets higher in the sky, catfish will move off the banks to docks and submerged structure.

On the flats, fish are holding tight to gravel beds, which are scattered along the north end in 4 to 5 feet of water. The best way to locate flats cats is to drift along with the wind or to bump along with the trolling motor with a ¼ or 3/8-ounce drop shot rig until the weight begins dragging across a noticeably harder bottom.

Most of the flats catfish have been in the 10- to 14-inch range, while those on shoreline structures and docks have been in the 2- to 6-pound class. Much larger catfish can be found, biting live or cut shad or chunks of bream or even hitting spinnerbaits or plastic worms. Louisiana allows 100 catfish per day per angler in aggregate among channels, blues and flatheads, 25 of those can be less than 11-inch channels, 12-inch blues or 14-inch flatheads.

The return of the catfish and bream along with some trophy bass catches this spring is being celebrated by the scores of Baton Rouge-area anglers who grew up fishing False River but unfortunately watched the lake decline severely over the last three decades. 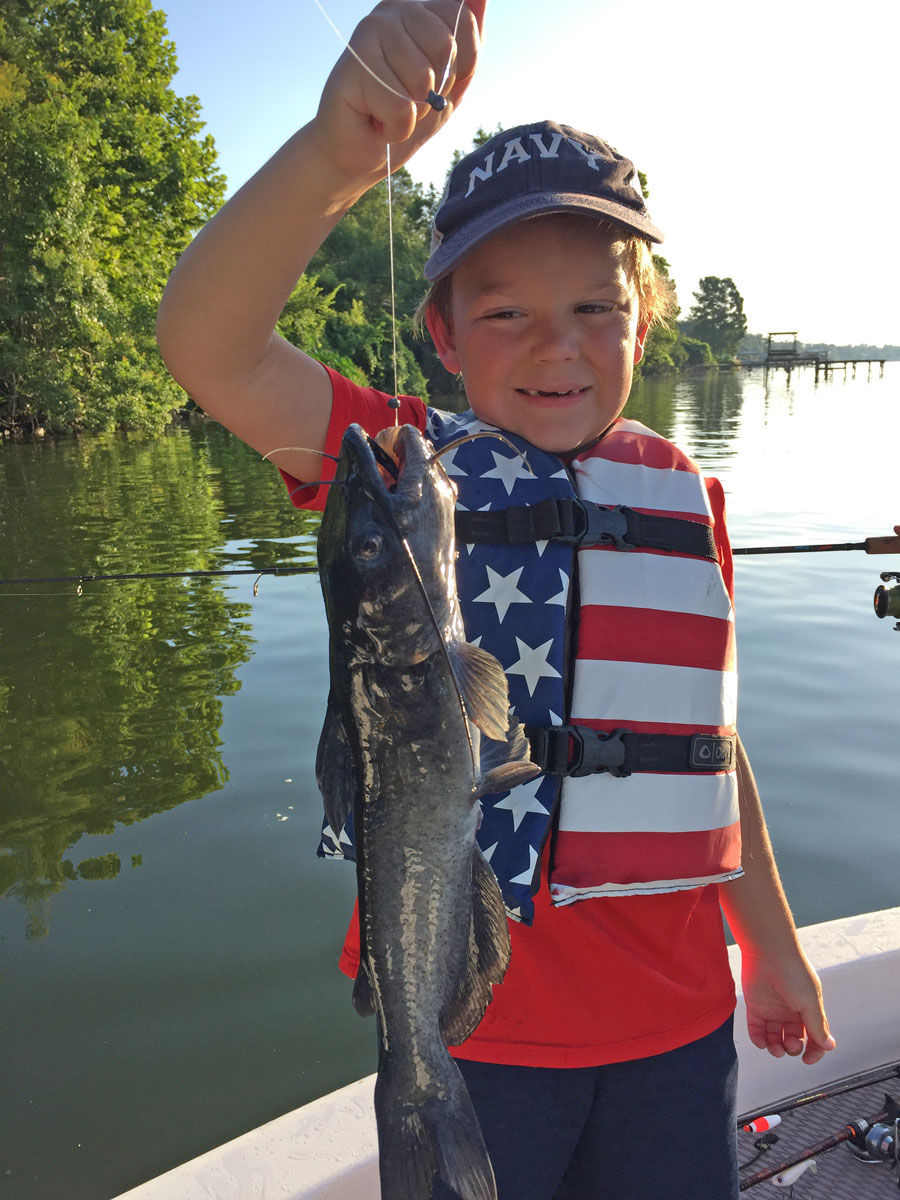 Efforts to improve drainage in surrounding farm land and prevent property flooding inundated False River with sediment, covering the clam beds on the north and south flats and killing the extensive submerged vegetation that made the oxbow one of the most productive big bass lakes in the country in the 1980s.

With the loss of the vegetation and with sediment covering critical bass, bream and catfish spawning grounds, rough fish like buffalo, gar and carp began taking over the lake.

The Louisiana Department of Wildlife and Fisheries, U.S. Army Corps of Engineers, Pointe Coupee Parish Policy Jury and the state legislature worked to help revive the lake. Sediment traps were installed on drainage canals to stop silt from entering the lake. The lake was drawn down by a couple feet in 2014 to dredge the south end and create a small island. In 2016, it was lowered 5 1/2 feet from early September through January 2017 to allow sediments to compact and vegetation to take root, resulting in much better spawning habitat for gamefish. The lake was lowered again in late 2019 and future drawdowns are expected.

Gravel beds were built on the north flats to mimic the historic clam shells that attracted spawning chinquapin and bass. And, future restoration efforts call for the installation of artificial reefs to build upon the drastic improvements in water and fishing quality anglers are experiencing this year.