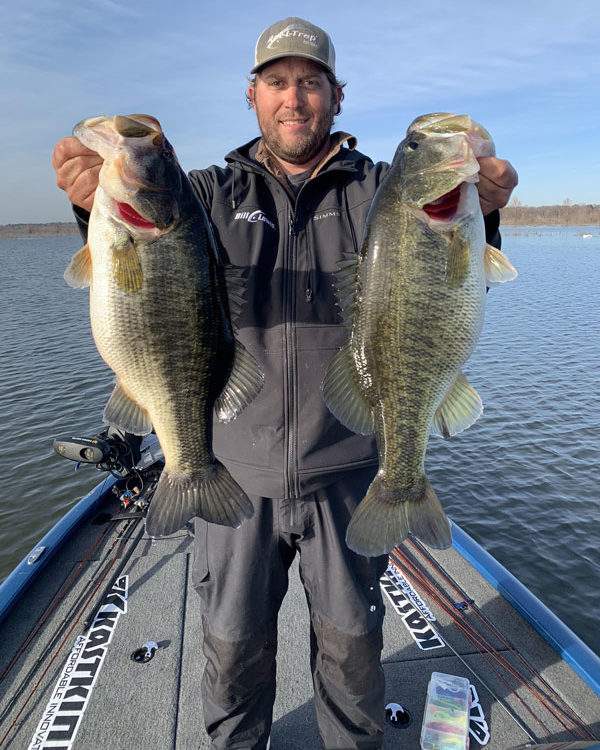 How will rejuvenated lake in Morehouse Parish fish? A couple of local experts help anglers understand what it will take to succeed at WMA reservoir.

Jake Ormond of Sterlington fishes all over the country as a touring bass pro. Breaking the “code” of the lakes he fishes is part of his daily work schedule, but he said there’s something unique about figuring out the “new” BusseyBrakeReserv0ir.

“When you go to most lakes, you know something about where people catch fish and how,” Ormond said, “and you are familiar with the structure. But Bussey is a totally different lake than it was … before. It requires a totally new approach.”

The 2,200-acre, man-made reservoir in Morehouse Parish was drained, boat channels constructed and other improvements made after International Paper donated it to the Louisiana Department of Wildlife and Fisheries. After being closed for 8 years, it reopened in July, 2020.

“Before, the water was muddy and there was no structure except the stumps and the two windbreaks with small cypress trees. There was no grass or vegetation,” Ormond said. “The lake was almost empty so long it has grown up in bushes and small trees everywhere. And there is vegetation everywhere. It’s great for the fish, but tough for the fishermen.”

However, breaking the Bussey Brake code has great rewards. As anglers figure things out, results have been amazing. In the first weeks after the lake was re-opened, two anglers weighed in bass weighing better than 10 pounds. This past winter, when crappie started moving out from under acres of lily pads and the leaves fell off thousands of young cypress trees, anglers started to find out what size fish lived there. In the same week, anglers caught black and white crappie that both broke into the state’s Top 10 fishing record standings.

“There are already some community holes developing for bass at Bussey,” Ormond said. “Most of these are along the windbreaks and the weedlines along the boat runs. These are good places to fish. But as the fish finish the spawn and move this spring, they’ll be really keying on the grass and bushes around the deeper sloughs. The best spots are where you can find holes in the middle of the grass or irregular edges to the grass.”

Ormond has already developed a list of favorite lures for Bussey.

“All around, it’s just hard to beat that chrome and blue back Rat-L-Trap or something in a shad color like the Summer Shad,” said Ormond, who suggested other lures, including mixed-color spinnerbaits and buzzbaits — he makes his own JO custom lures — Grande Megatail and Zoom Speed worms in purple or junebug colors, crankbaits like the Lewis MR6 and SB57 in shad colors and frogs like the Booyah Popping Pad Crasher in black and blue.

His approach? Keep your eye out for baitfish and start looking. You want to keep your lure in contact with that grass but not bog down in it. And avoid the temptation to just go where everybody else is.

“One thing you have to remember is that at least 30% of Bussey is not fishable right now because the willow trees and bushes are grown up so thick. You can flip the edges, but you really can’t get back up in there. The bass have some great places to hide, for sure.”

Crappie were one of the top targets in the old Bussey Brake, but this past fall, they were hard to catch. They still aren’t everywhere, but when fishermen find them, they are finding a good mix of small to medium fish up to some monster slabs that have obviously been in the lake a long time.

Jimmy Watt of Bastrop is one of the area’s top crappie anglers; he tied the hand-made jigs that caught both of the winter’s huge crappie. Here’s how he suggests you fish the “new” Bussey.

“Like I always say, find the shad and find the fish,” Watt saic. “That’s the reason they were catching so many fish up front this winter, because the shad were bunched up near the deep holes. Now, they’ve started moving out into the brush again, and by this time of year, the spawn is over. The fish will stay up in that brush and around the old stump fields, but they will be more scattered.”

Watt said, unfortunately, there are no real easy ways to find fish except putting your bait in the water and go fishing.

“I would ride around and use my electronics to look for different depths and fish the edges,” he said. “And be mindful, those fish are going to be up in that brush and willow trees. It’s not easy fishing, but that’s probably good for the lake right now.

“I’d watch for birds, too. They’ll be feeding wherever the shad are. Fishermen familiar with the lake can also find fish up on the stump flats. Last year, most of the flats were covered in lily pads, but with the deeper water this year, those pads won’t be as thick.”

The water color changes quickly in Bussey Brake. Early in the year, it’s a bit off-color, but in the warmer months, it’s clearing up to a nice blue color, so the choice of lure colors is sometimes important sometimes. While some anglers like to fish shiners, Watt is simply a jig fisherman.

“What’s a shiner?” he asked, joking. “No, seriously, I like to fish a silver jig with a plain leadhead that imitates a small shiner. I also think the best colors at Bussey, especially this time of year, will be natural light or dark colors. A good jig color for me is also the solid chartreuse. It’s especially good when you have stained water.”

With the fish up in the bushes, Watt said jigs also give you an advantage in not getting hung up as much as live bait. He advises anglers to learn to raise and lower their bait into the water by holding line in their free hands, placing the jig over the spot you want to fish and then lowering it. That keeps slack at the end of your rod at a minimum.

Watt agrees with Ormond about the banks at Bussey. They look great and offer some great cover for fish because the trees and bushes are grown out 10 to 15 feet from the banks, but you can’t even reach the rock-lined levees, except in a few spots.

“That’s a great spot for crappie earlier in the year during the spawn, but I don’t think they’ll hang around there this time of year anyway,” he said. “They will move on out into the lake.”

Anglers are also already catching some really big bluegill and good channel catfish. The bream are also mostly up in the bushes but are also found scattered in beds around the grass. The edges of the structure around the levee is a good spot to try. The same can be said for catfish. The big fishing pier at the main boat dock, close to the paved boat ramp, is a good spot to fish. The fishing pier on the south end, along with a primitive launch area for kayak fisherman, is in prime bream and bass fishing territory without having to travel far.

As the Louisiana’s only Wildlife Management Area that is a lake, Bussey has some special fishing regulations. Make sure you know and follow them. The fish population, though not fully mature, is able to sustain fishing at this time.

Special regulations have been put in place to protect the young and expanding fishery, and hopefully TO ensure a quality fishing experience for all anglers. Bass are managed with a 5-fish daily creel limit and 16-inch maximum size and a 1-fish exception (one fish bigger than 16 inches can be kept). Anglers are allowed 25 crappie per day with a 10-inch minimum size, and bream have a 50-fish daily creel limit with no size restrictions. State regulations are in effect for all other species.

All fishing gear other than rod-and -reel or cane/fiberglass pole are prohibited. A valid state hunting/fishing license or Wild Louisiana Stamp is required to use WMAs. Anyone younger than 16 or older than 60 is exempt from this requirement. To purchase a license or stamp, visit www.wlf.louisiana.gov/page/wmarefugeconservation-area-licenses-and-permits.