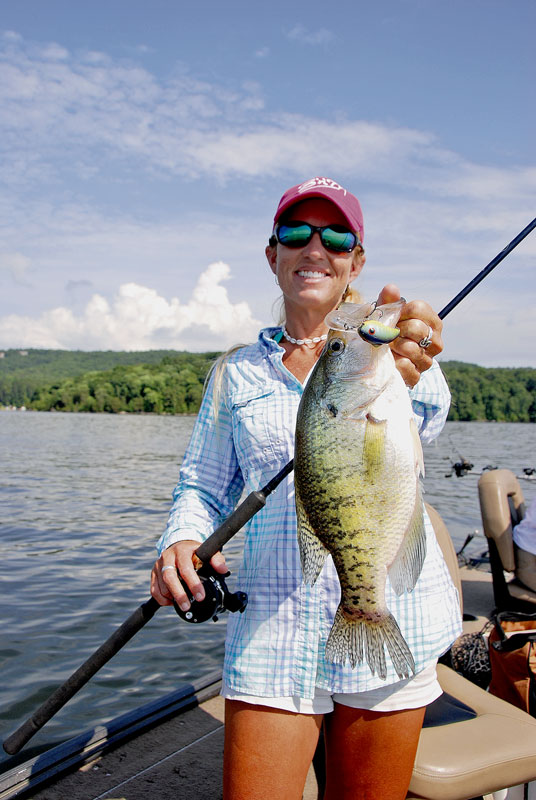 Keeping bait or fish alive in a bait tank or livewell can be a chore during the hot summer, but there are ways that anglers can put the odds of survival in their favor.

Whether the fish you’re trying to keep healthy are in the bait tank or in the livewell, there are several tricks that you can use to keep them alive — or at least tasty if the final destination is the table — and they all boil down to one thing: increased oxygen levels.

Once you understand how to control and manipulate oxygen levels in your livewell or bait tank, you can increase the fish’s intake of oxygen, which will keep them alive longer.

Here are seven ways to help control and maintain oxygen levels in your holding tanks.

Higher water temperatures in summer reduce the dissolved oxygen that fish need to survive. By inducing concentrated oxygen into the water rather than just air, which is only 16% oxygen, higher dissolved-oxygen levels can be maintained.

Supplied oxygen systems work through the use of a compressed air tank, a gas flow regulator and an air stone to disperse the oxygen in the water.

A portable oxygen system can be obtained online through retail tackle warehouses or bought at some high-end bait and tackle stores. Oxygen refills can be obtained at welding supply houses, medical supply stores or these same tackle shops.

“A lot of anglers are scared of using oxygen bottles because they believe there is a risk of fire or explosion,” said crappie pro Kent Driscoll, “but there’s no need to be. My portable tank has kept bait alive through the hottest summer days as well as fish in the livewell during a tournament.”

Almost everyone who fishes has seen portable air pumps that hang on the side of a cooler or minnow bucket to make bubbles in the water. While these devices work in more-comfortable temperatures, they don’t offer a lot of assistance when the air and water temperatures are above 80oF.

Part of the problem with the “bubbler” is that the air bubbles are too large to allow much oxygen transfer to the water. In order to saturate water with oxygen, especially warmer water, those bubbles must be smaller and suspend longer in the water.

Several companies that manufacture baitwells and livewells make air venturi systems that can be retrofitted to your livewell or built-in bait tank. The venturi systems both circulate water and, in creating a vacuum to move water, are able to suck air into the pump and finely mix the air with the water as it is pumped.

This mixing process produces exponentially more and much smaller bubbles, meaning more surface area for the transfer of oxygen between the air and water. The pumping process also creates a water flow that holds the tiny bubbles suspended in the water for longer, allowing more time for the transfer.

Several years ago, the cooler market was saturated with products offering denser insulating properties. The goal was to keep items stored in the cooler at colder temperatures for longer periods of time.

The same insulation principle can greatly assist with keeping livewells and baitwells designed to hold either bait or fish working at higher efficiency.

To check the insulating properties of your livewell or bait tank, you need to get a peek behind the well. In some cases, there may be no insulation at all. This problem will be compounded if the material used to construct the well is metal rather than plastic, due to metal’s ability to transfer heat. An uninsulated, metal livewell on a 90-degree day offers little more than a way to slow-cook your catch as soon as it’s deposited in the tank.

A fiberglass repair shop may be able to add insulation to your built-in livewell or bait tank by inserting a nozzle into an opening behind the well and injecting some expandable insulation behind the walls of the tank.

Another, albeit more-expensive option, is to replace your livewell tank with one offering better water-insulating qualities.

Often, fish caught during the summer are rapidly retrieved from deep water before their air bladders have time to adjust. “Fizzing” a fish will allow it to orient itself upright in the livewell rather than floating on its side, where only one gill can reach the water. Fizzing involves mechanically ventilating the air bladder, releasing the excess pressure so that the bladder will work normally without being inflated to the point of bursting.

Ronnie Capps, a crappie pro, designed a measuring device, now made by B’n’M Poles, that shows the angler where to insert a needle in order to ventilate a crappie’s swim bladder. It’s called the Crappie Saver.

“Take the fish and place it head first into the Saver,” Capps said. “There’s a sliding scale near the head that shows where you would insert the needle. You can get these hollow needles at most veterinary supply places.

“Going in from the tail side, slide that needle under the scale at a 45-degree angle and go straight down. You’ll see bubbles come out the other end of the needle, and you can even hear the pressure release. Just let the pressure equalize for about 8 seconds, remove the needle, and then you can release it or put it in the livewell, knowing he’ll survive until weigh-in.”

Before fizzing or venting became an available practice for the average angler, a few industrious anglers made fin weights to counterbalance the effect of the overinflated swim bladder. Fin weights are made by wiring an alligator clip to a 2- to 4-ounce sinker. The weights are clipped to the fish’s pectoral fins, making it ride upright in the live well.

“If you’re not comfortable with fizzing, or don’t have the needle and stuff, this is a cheap and quick way to keep crappie caught from deep water alive and healthy until weigh-in,” said Wilson Roberts, a Mississippi angler. “We used to do it all the time. I probably still got a couple of them rolling around in the bottom of my livewell for those times when I catch a good, deep-water fish.

“When adding ice, don’t use store-bought or any other ice made from chlorinated water, which will only remove oxygen, not add it,” said Brad Taylor, an angler from Greenville. “Lake or well water frozen beforehand in milk jugs or 2-liter bottles is a good way to make your own, chlorine-free ice.”

Straight to the cooler

Putting fish in a cooler on ice is not for bait or tournament fish that should be released, but by putting crappie you intend to eat directly on ice, and lots of it, the fish will chill faster and not marinate all day in a warm soup, making the meat much tastier on the table.

“You can tell when fish have sat in a hot live well all day,” said John Harrison, who guides crappie fishermen on Grenada Lake. “The meat gets mushy, and the guts will start turning. That gives the fish a really strong taste, and it’s a waste of some good-eating fish. All it takes is a little planning to bring some extra ice and put your summer time fish right in the cooler.”

A number of additives are available to assist with keeping fish alive and healthy in your livewell. Before you consider using an additive, make it a point to regularly clean your livewell. Fish often regurgitate and defecate after being caught, in addition to releasing other toxins. If these are allowed to remain in the livewell between uses, they can create bacteria that can quickly harm even healthy fish.

A good, hard rinsing with clean water after every use is the best way to maintain a livewell, with periodic scrubbing using a biodegradeable soap.

Additives typically try to achieve two primary goals: increasing a fish’s slime coat and reducing the release of toxins. Increasing slime coat is done by adding electrolytes to the water, which is a fancy way of saying salt. Reducing the release of toxins is a way of calming fish that is done with several different chemicals. Salt still plays a major role, but additional antiseptic compounds are also used.

At the end of the day, a good, clean, well-maintained livewell that has adequate insulation and circulation is hard to beat, but including additives in your bait tank or livewell can help address fish stress levels that tend to compound during hot weather.