Darold Gleason, a 37-year-old bass pro who will fish the FLW Pro Circuit in 2020, notched one of the biggest wins of his career with his go-to bait in February 2018.

Gleason, who owns South Toledo Bend Guide Service, credits a V&M Lures Pacemaker football jig for the victory that meant so much to his career.

The fish Gleason caught to win the Bassmaster Central Open at Toledo Bend weren’t all caught on the football jig, but he couldn’t have won the tournament without it. Here’s why:

“That jig helped me find them in practice and led me to the area. I could see the quality fish in the area,” he said.

However, there were other competitors there during the tournament, and the area was pressured heavily, said Gleason, who  used Carolina-rigged soft plastics and a crankbait, along with the jig, to catch 40 pounds, 2 ounces, win $42,800 and earn a berth in the 2020 Bassmaster Classic next month on Lake Guntersville in Alabama. He had 14 pounds, 15 ounces, the first day and a whopping bag for 25-3 the second day. He beat his closest competitor by 10 pounds.

When Gleason fishes the football jig in February, which is most of the time, he prefers a 5/8-ounce model if it’s calm, working it like a Texas-rigged soft plastic, kind of stroking it off the bottom.

“But you know, in February, there can be quite a bit of wind. I’ll use a ¾-ounce to keep it on the bottom and drag it all the way back” on the retrieve, he said.

As for colors, he likes to keep it pretty simple: green pumpkin/purple haze or black/blue. 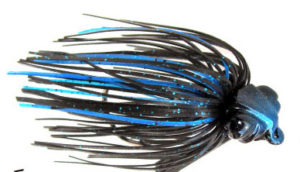 He doesn’t trim the skirt or the weed guard.

“No, V&M Jigs come out of the package just like I prefer,” said Gleason, who uses 15-pound Hi Seas fluorocarbon on a high-speed reel, at least 7.3:1. He has the reel on a 7-foot-4 Falcon Expert Series “Amistad XH” rod.

Where to fish it

Where he puts the football jig is the key.

“I generally throw that in 12  to 20 feet of water. I’m looking for prespawn bass that are staged up for the spawn,” he said.

He basically looks for places where deep water meets shallow water — near a drain or creek or spawning flat — to “intercept them before they go up.”

And those bass often are big bass.

“For me, a lot of times in February on Toledo Bend, I’m targeting big bass. A lot of times, I’m fishing for big bites: five, six or seven a day,” he said. “A football jig just catches on the average a little bigger size. With the confidence I have on Toledo Bend, if I can get five-to-seven bites, I can be competitive that time of year.

“Keep this in perspective. You’re throwing that bait in February to catch a fish of a lifetime. It does require some patience. February’s a trophy time of year to me. If I had to pick one month, February is that time.”

First bass sets us on a path to ruin; and off to the store for more lures!

No dyed-in-the-wool bass fisherman ever tells anyone — certainly not his significant other — about how much they spend on the pursuit of bass. […]