Caleb Sumrall is planning on another successful push to qualify for the Bassmaster Classic, and you can bet one artificial lure can make it happen during his stretch run on the oft-interrupted Bassmaster Elite Series circuit in 2020.

Sumrall’s confidence bait is a Missile Baits D Bomb, a soft-plastic creature bait he’s been using since it hit the market. For September, when he’s punching mats under which bass are cooling their fins, he wants to use a D Bomb. 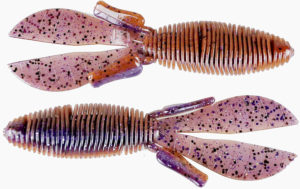 The D Bomb is effective pitching, flipping, fishing around docks and, of course, Sumrall’s specialty: punching. Its oily body is built to slide in and out of vegetative mats, and he doesn’t have to pick off annoying strands of grass between punches.

How Sumrall uses it

There are other good reasons to throw the soft plastic, which features an ultra-soft body and crawfish-like appendages. It has ringed ridges — ribs, if you will — tightly spaced to provide a solid body for the hook point; the rings are soft to expose the hook.

“I like to keep the bait moving fast. I don’t yo-yo it too much. Just keep it fast,” he said.

When Sumrall feels a bite, he doesn’t hesitate to lean into the hookset.

“You set the hook as soon as you feel a fish eat it, for sure,” he said.

“You can’t be doing it with a 10-pound rod; you know what I’m saying? Kistler makes a really good, lighter rod,” said Sumrall, who Texas-rigs the D Bomb on a 4/0 Super Heavy Cover Gamakatsu hook tied to 70-pound Sunline Xplasma braid. Most of the time, he uses a 1½-ounce Kajun Boss Tungsten weight.

“It all depends. I throw 2-ounce weight sometimes,” he said.

Sumrall’s advice for fishing the creature bait in and around the Atchafalaya Basin is to “just stay in muddy, current water. Try not to get stuck in the back end of dead-ends, real hot water,” he said.

Sumrall’s favorite colors are black/red and anything green pumpkin, he said.