When Fred King and Ray LaBorde, both of LaPlace, La., took matters into their own hands to make three different artificial baits, one of them was a little more of a challenge than the other two.

That lure evolved into the Delta Lures’ Rattling Jig, one they’re proud of today.

“At first, we had the eye with a little lip on it. It would hit (something) and roll over,” said King, who helped found the company in 2011. “I encased the eye, which was a more smooth transition from the eye to the hook where it wouldn’t roll over and get snagged.”

The transition was enhanced by the mold used by Cliff Pace of Petal, Miss., the 2013 Bassmaster Classic champion, whose offerings include a line of jigs in V&M’s Pacemaker series. The tweaking of the jig went back and forth before it got the go-ahead from King and LaBorde, bass tournament partners intent on filling a niche in the market with high-quality artificial lures at affordable prices.

King believes they have a winner with the Rattling Jig, as well as the other two products the company introduced: a spinnerbait and buzzbait.

“That was our bait we liked to use the most. It’s been real nice to see (the company) grow,” King said.

Each Rattling Jig features a 55-strand silicone skirt and double rattle chamber. It also has a streamlined head, horizontal recessed line tie and oversized fiber weed guard, plus a trailer keeper to keep a piece of soft plastic in place. 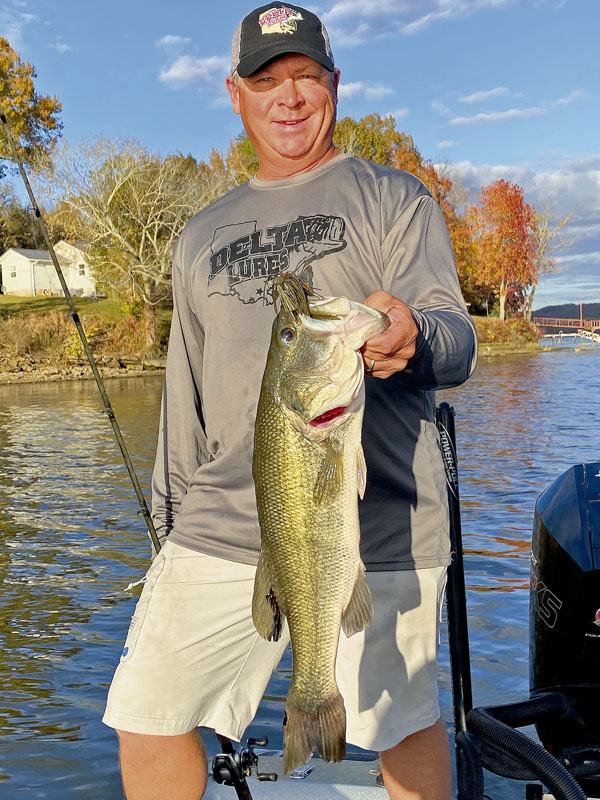 Those five sizes are available in 22 colors. King said the most popular locally are black/blue/orange, black/blue/purple (bruise) and black/red.

However, he said, “My favorite colors are black/brown/orange in the spring time.”

The jig’s success seems to be seasonal, with the beginning of the year the peak season. If it warms up quickly, spring arrives early, the jig’s popularity sometimes wanes among bass and bass anglers.

“I like to fish it. One of the reasons is if I’m fishing Venice, and fishing the roseau canes, you can go back and forth and don’t have to change (soft plastics like worms, creature baits, etc.) out. In the wintertime, that’s all I throw,” he said.

King prefers to throw the jig on braided line. Most of the time, he said, bass anglers fishing the jig in grass use braid. But in and around the Atchafalaya Basin, anglers like to throw it on fluorocarbon line because of the oft-increased clarity.

The Rattling Jig is one of bass pro Logan Latuso’s top three artificial lures in December. He favors a 3/8- or ½-ounce black/blue Rattling Jig.

“I find Delta jigs have got a big-enough hook, (and the weed guard) deflects the bait in cover. Really, the only modification I do to that weed guard sometimes is spread it out,” Bonadona said.