Is this the ultimate bait for anglers who just want to cast and reel?

It’s been a while since a revolutionary topwater bait — one that makes a difference for bass pros and recreational anglers alike — has been introduced to the fishing world.

Freedom Tackle has stepped to the front with a product that has drawn much attention: the Mischief Minnow.

The Mischief Minnow’s difference-maker is a blade called a “Kilter Blade,” attached to the belly between two treble hooks. The blade isn’t symmetric and doesn’t spin like a regular blade. The color matches the lure body most of the time but can be a different hue.

When retrieved, it has unique thrashing action combined with a clacking sound, wake vibration and blade flash, what the manufacturers call a true triple-threat.

The body is made with ABS (acrylonitrile butadiene styrene), which is known for its strong resistance to corrosive chemicals and/or physical impacts.

“The Mischief Minnow brings innovation to topwater by combining all the advantages of sound, wake and blade flash in a pencil bait design,” wrote Mike Tamburro of Toronto, Ontario, Canada. president of Freedom Tackle. “Two years of design and product testing has given us feedback from the biggest critics we have:  the fish. They don’t just eat it, they want to destroy it and that’s the kind of mischief we want to create when topwater fishing.”

The Mischief Minnow hit the market in late summer. Tamburro, who started the business, is one of the proud designers.

A great lure for all skill levels

Jeremy Lawyer, a bass pro from Sircoxie, Mo., who fishes a Mischief Minnow, also helped with the design.

“We put our heads together. It wasn’t easy to say, ‘There it is,’ ” Lawyer said.

Lawyer fished regional tournaments for 15 years, winning the All-American in 2016, earning an FLW Cup berth and qualifying for the FLW Pro Tour, which he has fished for the past five years. 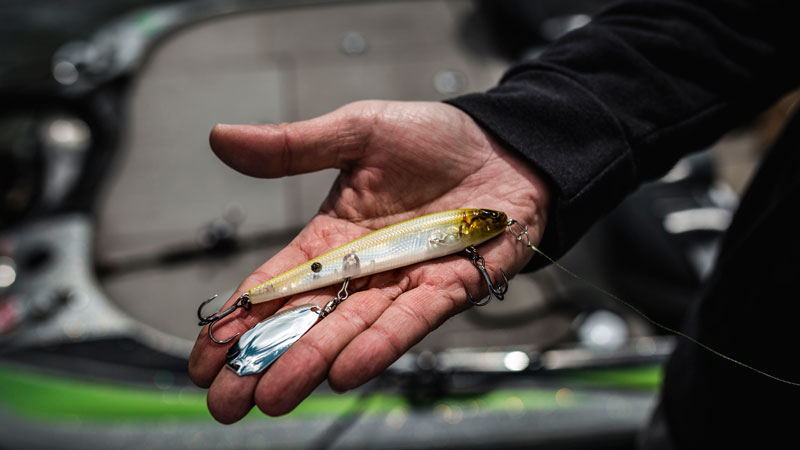 Experienced anglers and those with much less experience should be able to catch fish on the new artificial lure, Lawyer and Tamburro said.

Tamburro said the idea was, “Let’s create a bait where all the angler has to do is cast and reel. We wanted a bait that would trigger fish on its own.”

Lawyer said, “We tried to make it easy for the angler that’s maybe not real seasoned.

“Of course, I didn’t have a wire leader,” he said. After all, he was targeting bass.

Tamburro and Lawyer agreed the hardware is top-of-the-line, front to back.

“I said, ‘Whatever you do, let’s put good hooks on them,’” Lawyer said.

Tamburro listened. The new topwater lure has black nickel Gamakatsu short-shank trebles that Lawyer described as “sticky sharp” right out of the box.

The Mischief Minnow is available in 15 colors. Lawyer has two favorites.

“You know, bone is a pro’s favorite color,” he said, “and just clear shad with a silver blade.”

For more information on the Mischief Minnow and other Freedom Bait Corp. products, go to https://americanbaitworks.com/ or call (844) 466-5738.