Nick LeBrun looks for any advantage he can get over the wily, often-stubborn bass he spends many hours targeting for fun and money.

At this time of year, LeBrun believes he has to have his favorite swim jig tied on, one that has given him that advantage he’s seeking and on which he’s hooked countless bass.

“I can’t think of any place I haven’t caught them on it: Rayburn, Toledo, Caddo, Caney. I’ve caught a lot of good fish in Caddo on that swim jig.”

March has it all

LeBrun, 25, from Bossier City, has been fishing on the pro level in regional tournaments since 2010 and fished his rookie season on the FLW Pro Circuit in 2019. He said the swim jig is his meal ticket in March because bass generally are in the shallower water.

“In March, you have the prespawn, spawn and postspawn,” he said. “The swim jig catches all three phases. I like to throw it when there’s a little bit of grass and fish are spawning. When they’re on their bed, V&M has a white one that catches fish.”

LeBrun said a swim jig has paid off for him over the years, especially in March.

“It’s really good. It’s always been a player, and I’ve weighed a lot of fish on it,” he said. “I’ve caught fish up to 9 pounds. It catches quantity and quality.” 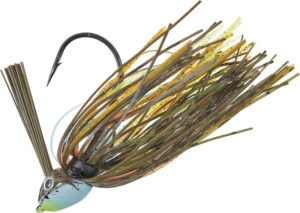 LeBrun said the Pulse swim jig has a custom-built, oversized, “strong” 30-degree, flat-eye hook that allows for improved hooksets and stands up to braided-line use in heavy cover. The V-shaped bottom of the head is shaped to direct the hook point away from cover when it comes into contact. Also, he said, the head is custom-painted to match the skirt.

How to fish it

LeBrun likes two colors: white that imitates a shad and bluegill patterns that imitate a bream.

The soft plastic trailer LeBrun uses plays a critical role, he said. V&M’s J-Bug, a 31/2-inch creature bait many bass anglers fish by itself, Texas-rigged, is his choice.

“It has just the right profile to add a lot of action to the bait,” he said. “They come in a wide array of colors. You can put a white one on shad imitations or a green pumpkin on bluegill imitations.”

“The swim jig has no drag, so you can go to a high-speed reel. And a lot of times when you use a swim jig, fish run to the boat. You just have way more advantage,” he said.

That reel is mounted to his medium-heavy, 7-foot-6 Fitzgerald Stunner Series rod.

“I just take it out of the package and throw it,” he said.