To catch a bass, head for the woods. If that sounds a little strange, that’s okay. Fishing the backwaters of the meandering Ouachita River is anything but normal this time of year. The river floods way out of its banks in late winter and spring, creating a mecca of backwater bassing opportunities in the flooded woods.

“It’s not your ordinary fishing for sure,” said bass pro Jake Ormond of Sterlington, who is in his rookie season on the FLW Tour.

“The water level is subject to changing pretty often in the river and the river lakes, but the fish basically follow two patterns,” he said. “When it’s still way back in the woods, the best approach is to find your way through the woods and get to the bank. That’s what the fish will do. As long as the river isn’t falling, they are going to follow the water, and that means they’ll go all the way up until they find a bank.

“There’s a lot of water back there, and all of it won’t hold fish, but there are a couple of things you can do to find the bass. First, you can just find some good-looking water and start fishing. Sometimes it’s a process of elimination. The best water in the river is the slightly off-color, but not muddy. You won’t catch many in areas that have black-looking water.” 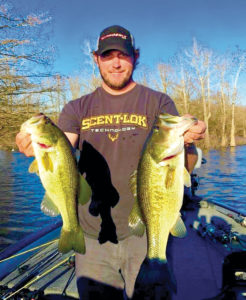 Once Ormond locates some good-looking water, he starts looking for baitfish jumping or any activity on or around the water, including shorebirds on the lookout for an easy meal. Bass spawn on the river a little bit later than they do in other area waters, said Ormond, one of the leaders of the original University of Louisiana-Monroe bass team, which has produced several anglers who are on the pro circuit today.

If the water is falling out or has dropped significantly, he focuses his approach on the cypress trees in the backs of the dozens of river lakes. Some of his favorites are Moon, Hamilton and Horseshoe lakes. Bass also relate to current in the deeper areas, especially the eddies, where they can lie in wait to ambush baitfish. In Louisiana, the Ouachita runs all the way from the Arkansas state line to the Black River near Jonesville. Bass fishing in the entire system is good this time of year.

When the bass are on the banks, Ormond loves to throw a white or chartreuse spinnerbait or buzzbait, and even makes his own custom spinnerbait: the Arkansas version of the Hawg Caller spinnerbait. He also relies on his own JO Custom Jig in black/blue or green pumpkin with a touch of orange. Soft plastics like Baby Brush Hawgs in the same colors work, too. When the fish are on the trees, he likes running the Rat’L Trap MR-6 crankbaits in crawfish or shad colors. He fishes those lures on Cast King rods and reels and also uses Cast King line.

“The bass are pretty aggressive in the river,” he said. “If you fish a spot for 20 to 30 minutes and don’t get bit, go try another spot. If you get on them and nothing crazy is going on with the weather or the water, they’ll bite.”

Ormond warns boaters to be careful in the backwaters. There are a lot of underwater objects, including gas well-heads in the pipelines. Good boat ramps allow access to the river along it’s length as it passes through Sterlington, Monroe, Riverton and Columbia.