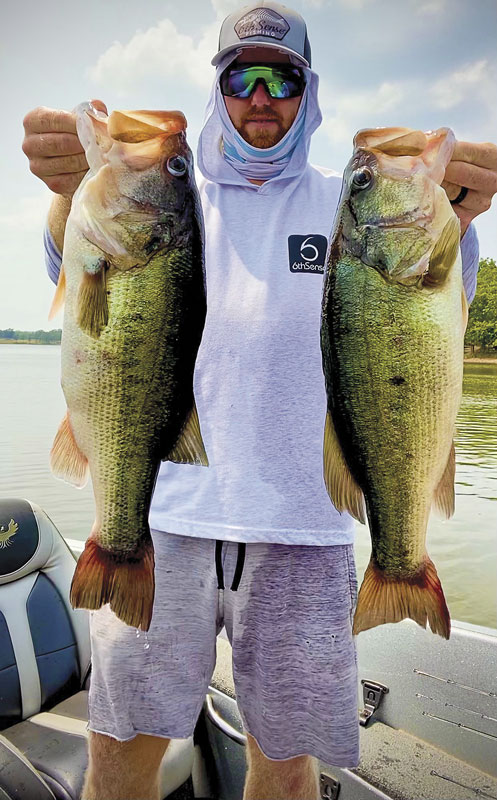 One place bass will gang up in October to fill their bellies are underwater humps. Here’s how one angler attacks them.

October is kind of “Hump Day” in the life of largemouth bass.

They are through the hot months, and instinct tells them cool weather is soon to come. Sometimes when that happens, they just don’t act right. That’s especially frustrating for anglers who try to pinpoint where bass are and what they want to eat.

But here’s one thing you can depend on: even when they get weird, if you’ll spend some time keeping a close eye on the submerged humps in your home lake, bass will probably be there.

“October is a weird month for bass,” said guide and pro fisherman Josh Jones of Sapulpa, Okla. “It’s a time when bass are getting ready to transition, and you can’t really predict what they will do every day. Weather and water temperatures control that. If it stays hot, they’ll stay on summer patterns. If we have early cold fronts and the water cools significantly, it will put them on the move.  Sometimes they do a little bit of both. One place that fish will relate to during this time, though, is the humps.

“In some lakes, the humps are notable, 10- to 15-foot deep rises next to 20 to 30 feet of water. On some lakes, especially lakes like you have in Louisiana, a hump may be 6 to 8 feet deep and the water around it only 12 to 15 feet deep. They aren’t that dramatic. The ones that are generally most effective this time of year are the ones that are not too far from a creek or river channel where the fish can easily migrate.”

A hump is an underwater island; it could be the top of a hill that was flooded when a lake was formed. Most humps have natural structure like stumps and fallen trees, but in older lakes, those may have decayed or silted over. Humps can have gradual inclines or sudden drops, but they all hold potential for bass-fishing success. In fact, almost every hump is unique,

All humps are not created equal, but Jones said picking out the best ones for bass isn’t that hard. Some are great, and others are not so great.

“The most-successful humps I fish are usually near deeper water, especially secondary creeks this time of year,” he said. “If you find a hump right by a channel, that’s money. What even makes it more money is when it has brush on top of it. The majority of baitfish are in deeper water, and if there is a hump with brush all around it, the baitfish will be swimming around that brush.

“The brush is a great ambush point for bass; they’ll hide in that brush and then ambush baitfish when they swim past. Later in the day, when the sun’s out, the fish relate to them even more. So you find a good hump with plenty of brush and fish it when the sun is up and puts fish close to cover, that’s the recipe.”

Time of day a game changer

“There are times I’ll get to a hump at daylight and not see any fish on the humps on the electronics,” Jones said. “But don’t let that discourage you. Keep coming back to check. If you wait until 10 o’clock, they may be all over it. What they are doing is roaming around feeding, then they return to the humps and brush to get out of the bright light.

“Remember, a hump is not necessarily cover; it’s just a feature, something different. Bass are drawn to that. The humps with brush, now that’s cover, and it ups the game. One near deeper water is just a bonus.”

When it’s hump day for bass, Jones has four major weapons for getting them into the boat. In stained water, typical in Louisiana, a crankbait is the No. 1 choice.

He starts off fishing humps he can reach with a deep-diving bait like a 6th Sense Cloud 9 C25 on a Dobyn’s Champion 908 crankbait rod. He bumps the bait along the edge of the brush. A C10 model works for shallower humps as well. He also likes to use the swim jig. When he spots really big bass on his electronics and can’t get him to hit a crankbait, he will go into his tackle box for an 8-inch Phoney Shad Glide Bait. The bait is a last resort because it’s a huge bait and can spook the fish, plus, it is uber-expensive. But sometimes, it is what the big ones want.

Jones uses another bait that isn’t on most anglers’ radar for hump bass. He loves targeting big fish with a 5-inch 6th Sense flutter spoon.

“Most anglers are leery of a huge flutter spoon because it’s just a hunk of metal that doesn’t look cool like most of our baits. But when he drop it down by the fish, it looks like a big old shad fluttering past them,” Jones said. “They hit it just out of reaction more than anything else. They are offended that anything like that would try and swim right past them. If they had time to think, they’d be saying, ‘Hey, that isn’t real food,’ but a bass doesn’t often take time to do that.”

Jones’ favorite color and pattern for all the baits he fishes is some variation of shad.

When the bass baits he uses don’t draw strikes, he downsizes to a bait he normally uses for crappie. On one fishing trip this year, Jones found more than 100 bass scattered around a large hump holding in the brush and suspended around it, but he couldn’t get them to bite anything. The fish were ultra spooky, and there had been a lot of fishing pressure.

“I know it sounds crazy, but when that happens, I tie on a 1/4-ounce, 21/2-inch Crappie Magnet curlytail crappie lure and drop it on their heads,” Jones said. “They can’t tell that’s a fake, and they gobble it up. I’ve caught numerous bass like that. It sounds unbelievable, but if you watch Facebook very much, you’ll notice a lot of crappie fishermen holding up big bass they’ve caught on crappie jigs and poles.”

Humps don’t always produce. Jones said bass can be finicky — no, make that downright weird — this time of year. As bass start feeling the natural instinct to go into their fall feeding patterns, there are some days when you can spot fish but can’t get them to bite.

Anglers regularly concentrate on humps in the summer, but fish still relate to them in the fall, especially when colder weather doesn’t really hit until later. Fish will often hold on humps, then move up creeks and onto flats to feed as the shad and baitfish move up.  But often, those baitfish also move back to the humps, especially those closer, traditional fall spots. Bass do the same things, then come back to humps to hang out. Even though they aren’t as actively feeding, they’ll still bite when you put the right goodies in front of them.

“They are smarter than we give them credit for, and combine that with changing conditions this time of year, it can be tough,” Jones said. “Sometimes, the fish will move. There may be 80 on a hump one day, then the next day, nothing. When you have a good hump pattern, though, make sure you cover the whole hump and attack it from different directions and with different lures. Sometimes, that is what it takes to get them to bite.”

You can save yourself a lot of time on the lake looking for humps by studying a topographical map before fishing, if they are available.

When too big isn’t too big

If an 8-inch bait like the Phoney Shad Glide Bait made by Phony Frogs USA that looks big enough to clean and eat just doesn’t sound reasonable, just take a look at a gizzard shad from one of the lakes Josh Jones fishes. 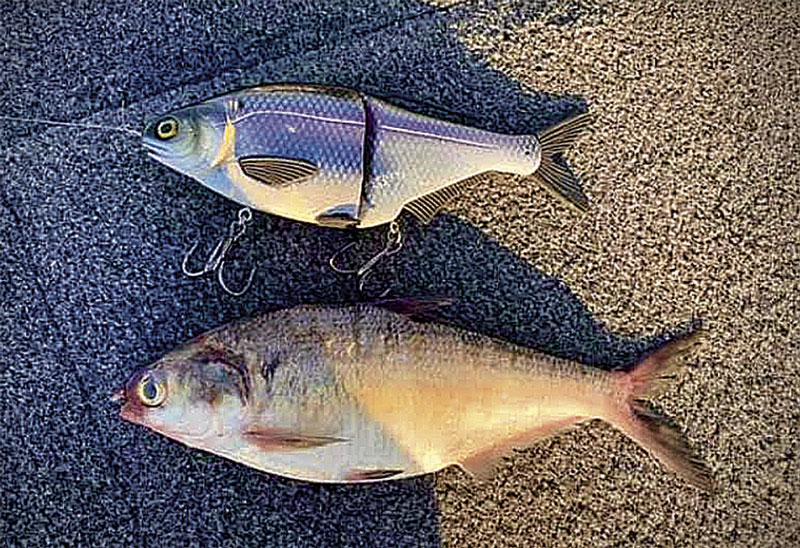 “There’s no ‘too big’ when it comes to going for big bass, and this lure is a prime example of that,” Jones said. “It takes some getting used to, but it’s a fish catcher. Sometimes it works when nothing else does. There are times when bass realize something is fishy and they’ll just follow it to the boat. When you see them following it and not biting it, switch to something else.”