Throwing smaller crankbaits, spinnerbaits and buzzbaits is the key to what often can be a funky time of the year for bass fishing success.

“You can have good days downsizing in September,” said bass pro Greg Hackney of Gonzales. “It’s good to generate bites. You still just fish the same areas. When it’s hot like that, keep your head in the game. As long as you do the right thing they bite.

“It’s another month that sucks. Typically for us in Louisiana, the weather’s just like August. September is probably the toughest month for fishing south of the Mason-Dixon line.”

Hackney, a 15-time Bassmaster Classic qualifier in his second year on the Major League Fishing Bass Pro Tour learned the valuable lesson about downsizing long ago from Ron Shuffield, a veteran Arkansas bass pro. An Arkansas native himself, Hackney was a teen, fishing a club tournament at the same time Shuffield fished a Red Man trail event in September along the Arkansas River; he won with a big bag, including some 6-pounders. Hackney never has forgotten the interview in which Shuffield said he caught his bass on a 1/8-ounce buzzbait.

There are a few good reasons bass dine on smaller artificial lures in September, Hackney said. For starters, shad fry hatched earlier in the year have grown just big enough to make a good meal for bass. Those bass seem to be less aggressive, too, also pointing out that many anglers still throw the same stuff they always throw, which encompasses mostly larger artificial lures.

Don’t believe for a minute that only small bass will bite smaller profile artificial lures.

Hackney’s co-favorites are a Strike King KVD 1.0, a Strike King 3/16-ounce Mr. Lil Money Spinnerbait and a 1/8-ounce Strike King buzzbait. If he had to have one locked in his hand, it would be the crankbait, he said. 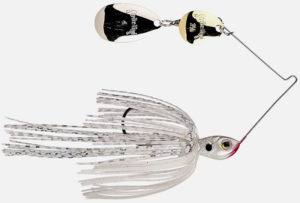 Shad-colored small artificials are the main meal ticket, he said. “Sexy Shad is probably the best all-around color ever made,” said Hackney. He also likes Tennessee shad and is a big believer in chrome/black but shies away from chartreuse/white because he “leans away” from those colors from August to October.