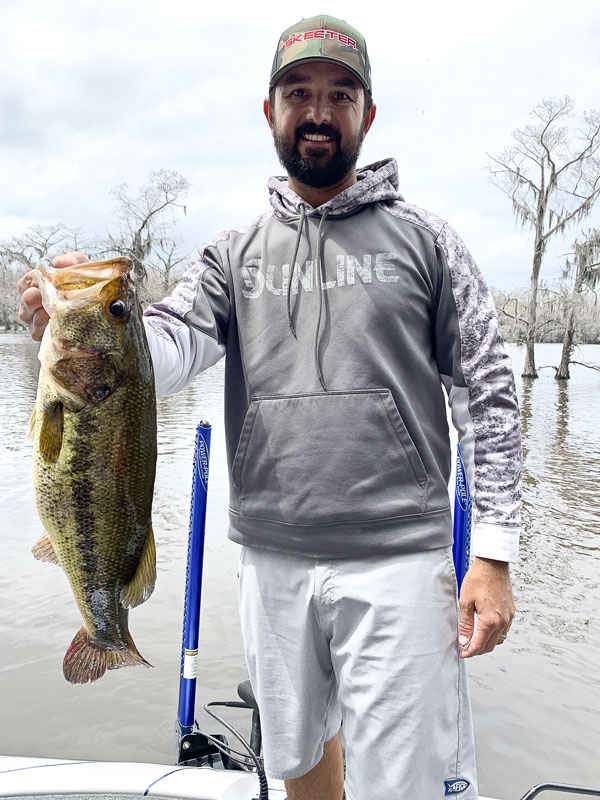 Rising pro bass angler Nick LeBrun’s story started when a couple of his uncles hooked him on fishing in the cypress studded waters of Black Lake at Campti. That’s where he learned to “nick ’em and stick ’em” with lures like plastic worms and Rat-L-Traps that still play a major part in his success.

LeBrun, from Bossier City, has also learned from his competitive fishing the final step in bass fishing: letting ’em go. The sustainability of bass fishing — especially bigger bass — lies with anglers being responsible for the resource and taking care by practicing catch-and-release. LeBrun and his fellow pros know that.

“I was about 12 or 13 years old when my uncles on my dad’s side took me fishing in Black Lake,” he said. “They taught me how to look for where to fish, how to worm fish and how to work a Rat-L-Trap. It was basic stuff, but by the time I was in my late teens, I was learning all I could about bass fishing and getting the itch to compete.”

In recent years, he has successfully scratched that itch, but it hasn’t gone away. He has three major wins, 20 Top-10 finishes and has won more than $400,000 on Major League Fishing tours alone. The highlight of LeBrun’s career came 2 years ago, when he won the Bass Fishing League All-American on Cross Lake in his own backyard.

While he loves fishing all over the country, he still takes time to catch bass on his home lakes in northwest Louisiana, and he doesn’t mind sharing some tips and techniques to make you a better fisherman here this time of year. Here’s a custom tour of some of his home faves:

Depending on the weather, a few fish will probably still be spawning this month. Even if the spawn is over, fish will be guarding nests, so cypress trees are a good place to start. Since the lake is full of them, you have to find the right ones. Unfortunately, there’s no shortcut to that. Just go fish, and when you find an area with bass, stay with it. Trees closer to deeper water are a good place to start.

The lake also features a lot of boat docks and piers, and fish will set up on those as well, especially when holding right off the nests or in transition after the spawn late in the month.

“I love to go after fish here with a weightless, Texas-rigged V&M Chopstick,” he said. “I also rig it wacky style, and sometimes when the fish want it to stay in the strike zone longer, that works well. A weightless Texas rig has a tendency to drift back toward the boat quicker. I also like to use a Hayabusa 959 wide-gap hook, because it lets me pull that lure through the water straight without twisting, and it hooks fish really good.”

Favorite colors are black/blue or green pumpkin/blue. If fish aren’t hitting the sinking plastic, LeBrun will also try a Spro popping frog. He likes popping-style frogs because they stay stationary better and the fish love the pop.

If you can find patches of hydrilla growing about 6 inches to a foot off the bottom in 3 or 4 feet of water on Caddo, that’s where you need to start for May largemouth, LeBrun said. The big mommas love the grass, and that’s where they lay up. Look for spots where it’s not too thick. Of course, cypress trees also produce, and if you find the two mixed, that’s a good spot, too.

“Either look at a map or go by your experience and try to find areas that won’t have much current this time of year if the lake is up,” he said. “They don’t like the current anywhere near the spawn. I’ll start with a V&M Pacemaker Pulse swim jig because I can cover a lot of water and find fish quicker. The white swim jig is a killer. I also like the 3/8-ounce size, because it keeps the bait up in the water column, and when the fish are on the trees, you are more likely to get bit. They also love the Chopstick here, too, and there’s a black and orange color that the fish just love. I don’t know why, but sometimes it’s the best bite of all.”

One caution about Caddo. It does have a lot of “dead” water. Don’t get caught looking at the scenery and fish for hours without finding fish because it all looks good. Focus on areas where you do get bites or see fish on your electronics, he said.

There was a time when the Red River would have been tops on this list, but since the 2016 floods, fishing hasn’t been the same on the massive river system.

“In May, focus on the oxbow lakes,” LeBrun said. “They used to be chock full of bass, but now you really have to hunt. The main river doesn’t really come into play until it clears up in the early summer. You are likely to catch fish around any of the structure in the river lakes, but one thing I like to look for is scattered matts of hyacinth. There aren’t near as many as there used to be, but if you can find those, you can catch fish. If there’s enough water under the mats to sink a bait, there’s enough water to catch a fish.”

Having the right gear to punch the mats is a must, he said. His favorite is a 7-foot-6, heavy action Fitzgerald Titan HD baitcasting rod with a Fitzgerald VLD10 reel spooled with 50-pound Sunline braid. He uses V&M Flat Wild lures rigged Texas-style on a Hayabusa 5/0 hook.

The shad spawn has a tendency to go off a little early on the Red, and if that happens, look for points and spots where the shad are schooling. The fish won’t be far away.

Cypress Lake and it’s sister lake, Black Lake, are almost in LeBrun’s backyard, and he loves to fish them. While the fish aren’t as big as in some lakes, numbers can make up for it. And fish may be anywhere this time of year.

“There are a lot of boat docks, seawalls and little patches of reeds that all hold fish,” he said. “Cypress is basically a recreational lake, with very little other visible structure. In the spring, there isn’t a lot of pressure, but on into warmer weather, recreational boaters get pretty active.”

This is another lake where LeBrun likes a bladed swim jig and anything shad colored, white or white/chartreuse.

“Just stay on the bank, put your trolling motor on high and make as many casts toward the cover as you can,” he said. “When you start catching them, slow down and work it a little more carefully. And don’t forget to hit the ends of the docks later in the day. I love to throw a Bill Lewis SB-57 crankbait and bounce it off the dock posts. Those post-spawners just can’t resist that.”

Lesson from the tour: Don’t get ‘hung up’

That doesn’t mean don’t get your fishing lure snagged in a bush.

It means when the fish aren’t biting in a certain spot, don’t get hung up fishing there too long just because you caught them there last year or last week. That’s one of the biggest lessons that Nick LeBrun learned by fishing tournaments he said is important for everyday fishing as well.

“Especially in the spring, if you aren’t getting bit, then frankly, you are probably not around the fish,” he said. “There are a few weeks when they are a little bit hard to catch post-spawn, but this time of year, you don’t have to have a superior skill level to catch fish unless something out of the ordinary happens.

“One of the best pieces of advice I can give is to tell fishermen to be more comfortable making moves and trying different things.”

That doesn’t mean giving up on what you know, and if you have a spot you just know fish are on, check back on it at another time, but don’t hang your hat on it, he said.

“Another thing that I just didn’t do much around home was fish topwater much in spring, and I’ve learned that is a mistake,” he said. “The good thing about topwater this time of year is that when you catch one, it’s usually going to be a big one.”

One bait that doesn’t always catch fishermen’s attention in the tackle shop that catches fish this time of year almost anywhere is the Bill Lewis StutterStep 5.0. The odd-looking lure gets its name from its tendency to cut at a sharp 90-degree angle when walked, stuttering back and forth next to cover, a step at a time. It can also be “wobble-waked” on the surface with a slow-to-medium, buzzbait style retrieve; or “tail-wagged” with light twitches of your rod tip.

About Kinny Haddox 493 Articles
Kinny Haddox has been writing magazine and newspaper articles about the outdoors in Louisiana for 45 years. He publishes a daily website, lakedarbonnelife.com and is a member of the Louisiana Chapter of the Outdoor Legends Hall of Fame. He and his wife, DiAnne, live in West Monroe.