A high school junior had mixed emotions after watching the 7.25-pound bass he had just caught, weighed and videoed suddenly become rambunctious and swim away before he could get a decent keepsake photo.

Andre Weber of Jeanerette wasn’t upset over its release, which he planned anyway after he hooked it on a Kajun Boss spinnerbait while fishing alone on March 19 in Lake Fausse Pointe, which has given up at least half-a-dozen 7-pound plus bass since February. It just shook out of his grasp and left him photoless save for the brief video of him weighing it that, he said later, didn’t do justice to its impressive size.

The 17-year-old diehard bass angler thought that would be his last hurrah, his last chance, for a photo of a trophy-sized bass. He was wrong.

“I’m the only one in the boat. I’ve got to get some kind of proof. I weighed it then got my phone and videoed (weighing it),” he said, noting he held the fish near the water over the side of the boat.

“That big thing started shaking its head and got away. I got to look at it for 45 seconds. I started thinking, ‘That may be the biggest fish I catch in my life and I didn’t get a picture of it.’ Then I go and catch an 8 ½-pounder,” Weber said, happily, the morning after he put an 8.50-pound bass in the boat while fishing with his brother and the man who taught him to fish, his grandfather, Larry Ransonet of Jeanerette, on the afternoon of March 22.

Twice in a lifetime

That 8.50-pound bass, which more than likely was heavier because his hand-held electronic scale weighs on the light side, put the world order back in place as it was the subject of beaucoup photos with Weber. His grandfather made sure of that.

Ransonet was extremely happy, and proud, of his grandson after that catch. He knows the young outdoorsman has watched countless bass fishing videos and fishes nearly every day.

“Unbelievable, especially because of what happened with the other one. Once-in-a-lifetime to catch a 7 ½. Then to catch one like that!” he exclaimed.

Because Weber was doing well with spinnerbaits on the Thursday he caught the 7.25-pounder, he started out that fateful Sunday with his brother and grandpa throwing a spinnerbait. After fishing so long and getting no takers on the Kajun Boss, he changed up and tied on a black/blue 3/8-ounce Strike King Hack Attack Jig with a “moonlight”-colored YUM Christie Craw.

His initial cast with the artificial lure combination started an exciting chain of events he’ll never, ever forget.

Getting the big fish in the boat

“On my first flip on a cypress tree, something hit it a couple times, like a little bass. Then it took off running. I set the hook and it felt like I was on a log. It felt like it, like a solid weight,” the Catholic High School-New Iberia junior said. “I didn’t think it was a bass at first the way it was pulling drag. I thought, ‘No way it’s a bass.’ When he came up my legs started shaking, I started shaking. I’ve never seen anything that big. 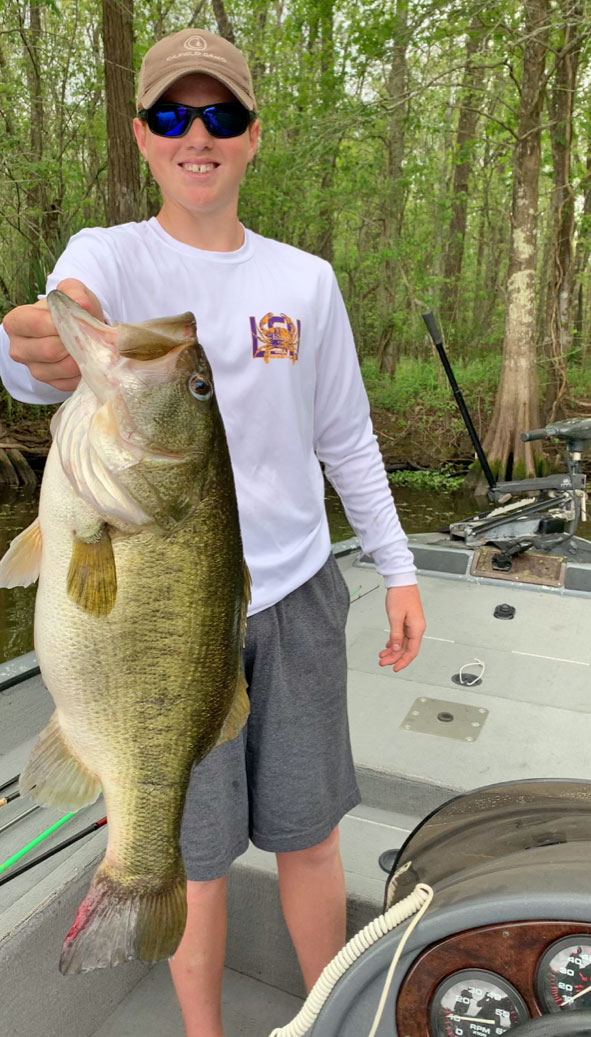 “It was nerve-wracking. I didn’t think it was a big fish (bass) so I didn’t set the hook hard. When my grandpa started netting it, the hook fell out,” he said. “Normally, I set hook with everything I have. I thought it was a bream at first. When I set the hook, it started going straight for the deep (water). They had a big mat of grass growing in deep water. He took off to go under it and the line was getting caught on it.

“After that, it was pulling draw and I have it set pretty hard. When it got near the boat, grandpa missed it twice with the net. I was so scared. It barely fit in the net. If it didn’t go in head-first, it wasn’t going to fit.”

And there they were. Two boys, their grandfather and the fourth bass weighing more than 8 pounds from the lake over the past month.

“I was screaming, shaking. I couldn’t believe it. Grandpa, he was shocked. He didn’t know what to say,” Weber said.

They weighed it. Took a few photos. Then filled up the livewell and put the “hawg” in there for a few minutes.

Measuring the girth (18 inches) and length (24 ½ inches) was next. Then they took even more photos.

There was never a doubt about releasing the bass.

The bass was “perfectly fine,” he said, when he positioned the boat and let it go over its bed to continue the spawning process.

“He was adamant about letting it go. He wasn’t going to keep either of them,” Ransonet said about the 8.50- and 7.25-pounder.