Brody Parker obviously doesn’t have to schedule a stress test with a cardiologist any time in the near future — if his heart was able to withstand the two up-close visits he got from a big 13-point last weekend in Rapides Parish, he’s probably healthy as a mule.

The 37-year-old from Woodworth was hunting on a 12,000-acre private lease Saturday evening when the big buck he had been watching on his trail cam since early this summer showed up with a bachelor group just before 6 p.m.

“I’ve been having pictures of this deer since the end of May,” he said. “Once I got the first picture, I’ve had one of him almost every evening in the daylight.

“He was regular. I think he was bedding pretty close to my feeder.”

The bucks showed up right on time, and Parker prepared his bow for the shot as the deer made their way from a tree line about 60 yards from his lock-on stand 20-feet up in a pine tree and ambled toward the feeder, which was completely enclosed by cow panels to keep wild hogs out.

“At one time in my view, I had six bucks,” Parker said. “The deer I shot was the lead deer. He was always the first one that came in, even on my pictures and videos.”

Sure enough, the big buck hopped in and started nibbling on corn, but a 10-point behind him hesitated just outside the pen.

“He was looking around, and I could tell he was real nervous,” Parker said. “As soon as the 10-pointer jumped in, I think my camera went off. When it did, it spooked him and he jumped right back out and took all the deer with him.

But just a few minutes later, a 3-point came out from behind his tree and hopped over the panels to start feeding. Then Parker watched as the 13-pointer – alone this time – made his way across the field again and headed back to the feeder for another try.

“I didn’t even know they were around me anymore. I thought it was all over. I didn’t figure he was coming back,” he said. “When I saw him come out, I was like, “Oh my God, not again. I don’t know if I can get back through this one more time.’

“I was already so danged nervous, it was freakin’ crazy. It was a nerve-wracking ordeal, man. I prayed and prayed and prayed that whole evening when all that was going down, because I don’t think I could have made it without the good Lord being with me on that deal. I could hear my heart beating as I breathed — that’s how bad it was.”

For the second time in just 15 minutes, Parker stood up and readied himself for another opportunity. He was using a BowTech Allegiance bow, with a Gold Tip Velocity arrow and a 100-grain RamCat broadhead.

“When he came out and got behind a little patch of sweet gums and my pine tree limbs blocked me, I stood up at that point,” he said. “I never even drew until he came into the pen to eat the corn.

“I’m not lying: I said many a prayer when I was going through all of it just to keep my composure. It not only happened once, it happened twice — that was the bad part. Thank God I don’t have a bad heart. I don’t know if I would have made that trip.”

This time, however, Parker got a clean shot from 21 yards and stuck the big deer just behind his left shoulder.

“It looked like a deadly shot,” said Parker, who works for CenturyLink. “But I just didn’t like the way I didn’t see my arrow completely pass through.”

The big buck wheeled and took off back to the tree line, and Parker stayed put for about half an hour before heading down and calling a friend from a nearby hunting club to help him locate the blood trail, which started right outside the feeder enclosure.

“About 25 yards out, I found a piece of lung literally as big as the palm of my hand,” he said. “And once that came out of him, then it was just following the blood trail with a light. It wasn’t very hard to see after that.” 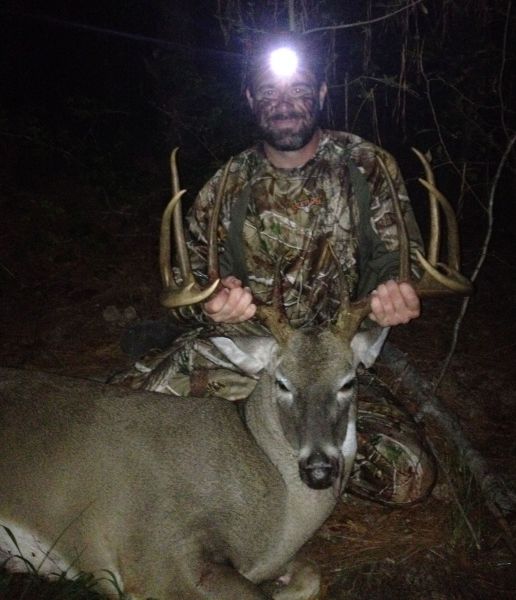 They found the buck about 70 yards from the feeder, just inside the far tree line, and Parker finally got to put his hands on a rack he’d been seeing on his trail cam for months.

“He was big in the pictures I had of him, but there was no ground shrinkage at all for me. I just couldn’t believe it. I sat down beside him and thanked the good Lord above,” he said. “It was a hell of an experience, man, it really was. I don’t even know what I could say about it.

“It was a once-in-a-lifetime experience for me. I just couldn’t believe it all came together.”

“I hunt on one of the first clubs established in Rapides Parish,” he said. “We think score-wise it will be the biggest deer ever killed on our hunting club.”

It easily surpassed his previous best-ever buck, an 11-pointer that scored 139 inches.

Don’t forget to enter photos of your bucks in the Nikon Big Buck Photo Contest to be eligible for monthly giveaways and the random drawing for Nikon optics at the end of the contest.

Read other stories about big bucks killed this season by clicking here.