Woes a double-edged sword for waterfowl and hunters

The record rains and flooding that plagued lower Mississippi Flyway hunters this past waterfowl season has continued to impact residents and businesses well to our north, even as we get into the heart of summer. Though an undoubtedly serious matter, something our residents know all too well, it may also include a couple of silver linings for both waterfowl and those that pursue them in the Bayou State.

Based on early reports, record rainfall and flooding has served to improve conditions on the breeding grounds in key states such as the Dakotas, Minnesota and Iowa. Runoff from melting snows combined with repeated rounds of torrential rains have breathed new life into wetlands that struggled to hold water in the past few years. As a result, breeding ducks should find improved conditions for reproduction this summer.

Additionally, the extreme rainfall has resulted in significant delays to Midwest farmers getting crops planted. According to data released in early June by NASA Earth Observatory, the continental U.S. has had its 12 soggiest months since modern record-keeping began 124 years ago.

Indeed, a winter and spring that was a boon for waterfowl habitat has turned out to be a bane for farmers, as soggy or flooded fields continue to hamper planting efforts for this year’s crops.

Though this is unfortunate news for those of us who love to include corn on the plate, it’s a potential positive sign for Louisiana hunters citing the act of flooding unharvested corn and other agricultural crops as a reason for delayed or reduced migrations of waterfowl. Whether the impacts of this practice are, in fact, significant or minimal, southern hunters aren’t likely to complain should crops not make it into the fields this year, or at the very least not at peak yields.

As of early June, farmers were still well behind the pace for typical planting schedules for corn crops throughout key producing states such as Missouri, Iowa and Nebraska. In fact, 2019 has marked the slowest pace in U.S. Department of Agriculture records dating back to 1980. For example, at May’s end, only about 58 percent of the Midwest’s corn crop had been planted; in a typical planting season, 90 percent of the crop in the ground. Into the first week of June, only an average of 67 percent had been planted among 18 key corn-producing states. 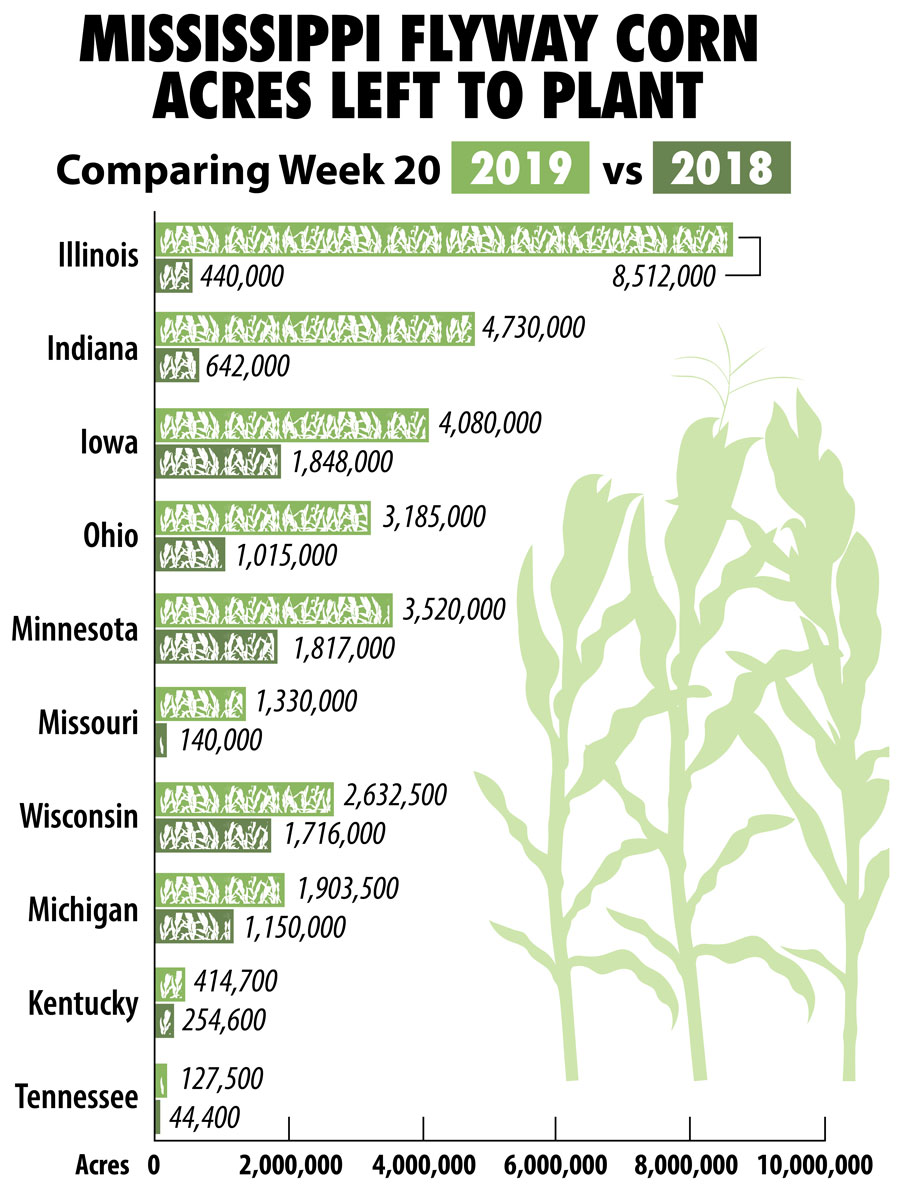 Record number of fields will not get planted

For some farmers, the last date for proper crop development and peak yields has now passed, leaving significant acreage unplanted for the summer growing season. Some agricultural experts were predicting in early June that a record number of acres that will go unplanted this year, an estimate that could reach nearly 6 million acres that are usually in production.

The adage “It’s always something” is certainly in play, as reduced corn acreage will surely result in higher prices at the supermarket; however, it may encourage a few more birds to make it down this way come fall.

Kennedy: Duck hunters are conservationists, give them a voice

Amending the Migratory Bird Treaty Act would give duck hunters a chance to make their case for extending the season. […]

About Darren Digby 64 Articles
Darren Digby has been hunting and fishing the marshes of Southeast Louisiana since childhood. He lives in Baton Rouge with his wife Ella.