Finding good places to hunt ducks in Louisiana is easy, but paying for it usually isn’t.

But there are alternatives, if you are willing to work a little. Louisiana has a great system of Wildlife Management Areas that offer good waterfowl hunting opportunities. Two of the best are the Russell Sage WMA just east of Monroe and the Pass-A-Loutre WMA at the mouth of the Mississippi River, about 10 miles south of Venice.

The Louisiana Department of Wildlife and Fisheries has developed 13 waterfowl management areas covering more than 7,000 acres on Russell Sage WMA, including 500 acres of flooded agricultural fields, 4,500 acres of moist-soil management units, 2,550 acres of greentree impoundments and 220 acres of shallow-water areas. The problem is, it takes a good bit of effort to get to these areas by ATV or boat when the water is high.

The Pass-a-Loutre (PAL) WMA is a series of river channels, natural bayous and man-made canals in the middle of freshwater marshes. Access is only by boat.

Vegetated marsh areas have been hurt in recent years, but the state is developing more waterfowl-friendly areas by diverting sediment-laden waters into open bay systems to promote delta growth. Ducks Unlimited, working with the state and other agencies, recently modified two existing crevasses to significantly increase water flow. That helped form new land, and the leftover material was located to create two bird-nesting islands. Restoration has been taking place since the 2010 Deepwater Horizon oil spill.

“Pass-a-Loutre, or PAL, as it is most often called, is a big area, and the best thing about it is the isolation. And the worst part about it is the isolation,” says Shane Granier with LDWF’s New Orleans office, who managed the area for almost 10 years. “I’d say it is one of the best duck hunting areas in the whole world, but it may be the most challenging to hunt as well.”

To hunt PAL, hunters have to put in at the “end of the world” at Venice, then motor 10 miles down the Mississippi River along with ocean-going vessels, crew boats and other kinds of challenges, including fog, shifting channels and currents. But once you get there, it’s a duck-hunting mecca.

“We always emphasize to people how challenging it is when they ask us about PAL, but we also let them know that many hunters feel like all the adversity just makes good hunting that much more rewarding,” Granier said.

Some hunters avoid the long trip by staying at private camps or on camping grounds provided by LDWF. Others wait for daylight before motoring in. Granier said being there at the crack of dawn isn’t a necessity as it is some duck areas. 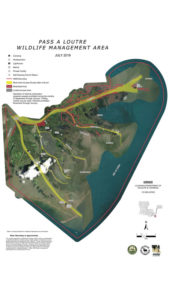 “People who are successful here do a lot of scouting,” he said, “and they aren’t afraid to pick up their set and move with the ducks. Ducks do tend to move around a lot here, and so do the hunters. They use pop-up blinds, find spots to hide in the cane or have boat blinds. The best areas to hunt are some of the tougher areas to get into. The shallower bays, like the area on the west side of South Pass, hold really good concentrations of ducks. Primary food sources are widgeon grass, pond weed and delta duck potatoes.”

Keeping up with the tides is critical. Many of the best spots are extremely shallow, and if you hunt on a falling tide, you may set up in a couple of feet of water at 6 a.m. and be stuck on a 400-yard-wide mud flat by 10 a.m. LDWF gets plenty of calls to help hunters who are stuck, but some hunters are stuck until the tide comes back in.

Like other areas, the key to finding ducks is the food. The ducks will go to the food where they are least likely to be disturbed. In PAL, that gives them lots of options.

One word of caution, special regulations about access and boating activity are in place for this area, and it is up to the hunters to know and understand them.

“The best thing we have at Russell Sage is the variety of different habitats that not only offer the ducks different places to go, but also offer hunters a choice of types of hunts,” said Mitch McGee, who helps manage Russell Sage out of the LDWF office in Monroe. “One of the best additions we have is the Wham Brake area on the north end of the refuge. The area is managed as a moist-soil area and has a variety of plant life, as well as water areas. Annual drawdowns help keep this area a popular destination, just as it was for decades when it was open to the public by previous owners. 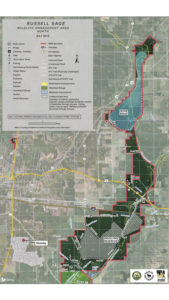 Other popular areas include the Potluck Area, the Beanfield and Pintail Alley. McGee warns hunters to make sure they are aware of the waterfowl sanctuary area inside the refuge, north of Highway 15. No waterfowl hunting is allowed in this area, and all hunting is illegal during waterfowl season.

On the south end of the WMA is the Bosco Tract, a 1,700-acre farm that is rotated between rice and soybeans. When it is holding water, it is a prime spot for ducks. The Bosco and Alto areas are also home of some of the best private-land hunting in the region, so ducks are naturally attracted to those spots as well. When hunting pressure on the private land is heavy, good numbers of birds often retreat to the WMA.

The biggest problem hunters may encounter is that, because it is so close to Monroe, it is heavily hunted, especially around opening days. After the first week of each season split, however, hunters seem to spread out and find other spots. Surface-drive boats and ATVs are used to get to most of the good hunting spots. 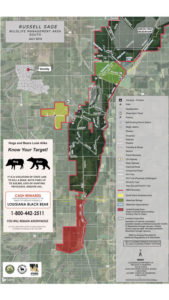 Some new regulations concerning outboard motors will be in effect this season; they will not be allowed in certain areas from 2 p.m.-4 a.m. Managers hope that type of regulation, plus the sanctuary area, will help the WMA hold more birds for longer periods of time, which ultimately benefits hunters.

“Not only are these prime duck-hunting habitats, but the proximity to good food resources like agriculture fields at Russell Sage and duck potato at PAL makes them special,” Reynolds said. “About the only thing that keeps hunters from success on either of them is if the weather doesn’t cooperate or if there is a lot of hunting pressure in smaller areas at some times. The hunting pressure is more of an issue on Russell Sage than PAL. PAL is under-utilized because of the access issues.”

With no place to go but up, Louisiana’s January duck numbers rebounded from the paltry numbers observed in the December survey. […]

Before you start looking for your next “hunting partner,” here are a couple of things to consider when getting a hunting dog. […]

In this 2022 public land duck hunting video, Jared Serigné went with his buddies Joey Mac and D’Lane Harris from Out the Mud Outdoors. […]

About Kinny Haddox 435 Articles
Kinny Haddox has been writing magazine and newspaper articles about the outdoors in Louisiana for 45 years. He publishes a daily website, lakedarbonnelife.com and is a member of the Louisiana Chapter of the Outdoor Legends Hall of Fame. He and his wife, DiAnne, live in West Monroe.