What does the season hold for public- and private-land hunters in the Lake Charles Region who pursue deer, ducks and small-game species this fall and winter?

It’s an age-old tradition that hundreds of southwest Louisiana deer hunters take advantage of on the opening weekend the season: managed gun hunts on four popular WMAs in the Lake Charles Region.

The either-sex deer hunts on Clear Creek, West Bay, Fort Polk and Peason Ridge start the last Saturday in October. Because they open on the same day, deer hunters are spread out and the woods are less crowded.

It wasn’t always that way.

Wendell Smith, Lake Charles Region biologist manager the past 13 of 31 years he has worked for LDWF, remembers when the WMA openings were staggered in the late 1990s. When Clear Creek opened, an estimated 1,900 to 2,000 deer hunters filled the 52,559-acre WMA in Vernon Parish.

Similar crowds showed up to hunt the next weekend when West Bay opened, then the other WMAs. Something had to be done. 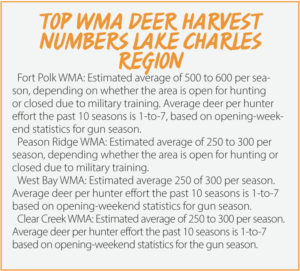 “We decided to start having them all at the same time,” Smith said.

“It’s the first time the season is open, the first time the public gets a shot. They show up opening weekend and do pretty good, unless the weather messes them up,” he said, noting the consistently successful deer hunters scout ahead of time and learn the areas.

Some of the best bowhunting in the state could be at Zion Hills and Mill Creek on the Fort Polk WMA. Smith suggested scouting because the area is large.

Hunt clubs on private lands with solid deer-management plans can reach a level of success equal to WMAs in southwest Louisiana, Smith said. He urged landowners and hunt-club presidents to reach out to the LDWF’s private lands biologists to help manage property for deer, turkey, quail and squirrels. 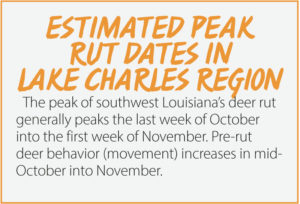 For DMAP private lands, browse surveys the past few years have been moderate. However, last year’s mast surveys indicated low to moderate production. Smith and others are seeing lots of fawns on the ground. 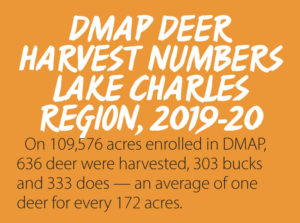 On DMAP private lands, Smith and other biologists expect numbers similar to last year: one deer per 172 acres. Most DMAP hunting clubs are on pine plantations, with the exception of one being bottomland and a few in marsh habitats along the coast.

On WMAs, Smith rates the top four WMAs — Clear Creek, Fort Polk, Peason Ridge and West Bay ­— a solid 8 out of 10, while rating the region’s other WMAs — Marsh Bayou, Sabine Island and Walnut Hill — a 3.

On WMAs, Clear Creek borders the Sabine River bottom, and it is common for mature bucks to cross over into Clear Creek during the rut to give hunters a shot at a quality deer. The same can be said for Fort Polk and Peason Ridge, which have large hardwood bottom tracts, but on average, they yield bucks that score below the quality level.

Bucks in these areas won’t compete with those harvested on the eastern side of the state. However, Smith expects to see 175- to 185-pound bucks with 8- to 10-point racks and an average spread of 16 to 19 inches.

Year-in and year-out, Sabine Island WMA offers excellent hunting for wood ducks, which use the sloughs and ridges for feeding, nesting and roosting. Heavy, spring rainfall followed by a moderately wet summer means the freshwater marshes should be in great shape for ducks. Otherwise, good, old-fashioned, winter weather is a must, starting in the upper Mississippi Flyway.

While West Bay WMA’s squirrel harvest numbers are higher than all others WMAs in the Lake Charles Region, the highest harvest per hunter is on Sabine Island WMA.

“There are cat squirrels all over there,” Smith said Sabine Island, which is accessible by boat only. Squirrel hunters are urged to launch at Niblett Bluff Park off Louisiana 109. They also are advised to bring a GPS to navigate the island and to let people know where they are hunting before the trip.

“What’s really got me is the number of rabbits I’m seeing in the mornings,” Smith said. “It looks good for small-game hunters. There are a certain number of hunters who have rabbit dogs. Usually, they are the ones who are going to hunt. The ones who do show up should have a good season.”