What does the season hold for public- and private-land hunters in the Hammond Region who pursue deer, ducks and small-game species this fall and winter?

Jillian Day, an LDWF biologist, has been busy overseeing areas on public and private lands in the Hammond Region. Entering the 2020-21 season, Day realizes southeast Louisiana is so vulnerable to Mother Nature.

“All we can hope for is the storm season to spare us,” Daly said. “As long as all that works out for us, we should be in for another average season” or even better.

Day said that an ongoing project at Maurepas Swamp WMA  involves the U.S. Army Corps of Engineers, and that contractors and heavy equipment are on-site to work on the West Shore Lake Pontchartrain Levee Project on the lower part of the WMA. Day said the footprint of the levee was being cleared.

“There’s a lot of dirt that has to be moved, something users will have to deal with the next several years,” she said. 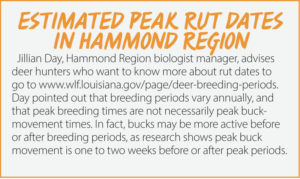 The project is scheduled to be completed in January 2024.

Day also said LDWF personnel planted the legendary dove fields earlier than usual this year on Sandy Hollow WMA. Wheat didn’t produce as much as it has in the past, she said.

“The fields seem to be doing well. We got them in the ground when we needed to” and there was plenty of rain late that aided in the growth, she said.

Dove hunting is fair to good, mostly good, every year, particularly during the popular youth hunt.

On DMAP private lands, according to the browse survey this spring, habitat conditions appear to be stable in upland pine hardwood areas, Day reported. Lower browse availability and utilization in industrial pine habitats, coastal marsh and swamp hardwoods are stable. Browse surveys on private lands were delayed by coronavirus restrictions and protocols.

On WMAs, a wet start of the year impacted the region, as the 35,619-acre Pearl River WMA was inundated for several weeks by flooding. The area was closed, and lottery turkey hunts were canceled. Day reported that prolonged flooding delayed growth of understory vegetation and reduced browse availability. Mast surveys over the past two years have shown consistent production by red oaks, but low output by white oaks. Overall habitat across the region is more conducive to small game.

On WMAs, Day reported that quality deer hunting depends on the habitat type on each WMA in the region, which covers 17 parishes, all with diverse habitat type. Over the years, the region has seen older age-class deer harvested off Maurepas Swamp WMA and surrounding areas. Tunica Hills WMA is another area that produces what many hunters would consider quality deer.

For WMAs, Day reported that hurricane season, which got off to an early start this summer, could possibly impact the region. While some disturbances can help provide browse for deer and early successional-dependent species, the influx of higher salinity with storm surge and high water can suppress food sources for waterfowl and other wildlife associated with those wetlands systems.

The region’s top waterfowl WMAs are Manchac (1,594 ducks in 894 hunter efforts reported in 2019-20), Pearl River (1,471 ducks in 1,900 hunter efforts) and Biloxi (391 ducks in 182 hunter efforts). Before last season, she called Biloxi, which has numerous bayous, sloughs and potholes used by ducks, one of the premier duck-hunting destinations in southeast Louisiana.

“Barring any major weather events, those WMAs are on track for another average season in 2020-21,” she said.

Pearl River, Maurepas Swamp and Tunica Hills WMAs probably will provide most of the region’s squirrel-hunting action. According to Day, red oak mast production has been favorable in back-to-back years, starting in 2018, which bodes well for squirrel-hunting success.

How successful can it be? Last season, 1,876 squirrels were bagged in 1,354 hunter efforts at Maurepas Swamp. Also, Tunica Hills WMA had 384 squirrels taken in 331 efforts.

Some of the most successful rabbit hunting again this season should be enjoyed at the top producing WMA the past few years: Maurepas Swamp. It isn’t the typical rabbit hunting mecca because of its habitat, but there remain 112,000 acres suitable for rabbit hunting. Others worth rabbit hunting are Pearl River WMA and Joyce WMA.