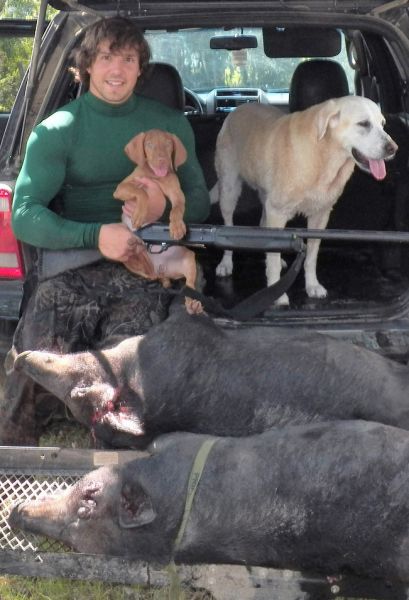 If hogs are causing so many problems on state wildlife management areas, I’ve always wondered why hunting rules didn’t allow us to harvest these invasive animals more often.

But this year I finally got my wish: new regulations changes at many WMAs now allow hogs to be legally taken during any gun season, as long as it’s with the legal ammo for that season.

This means now during September dove, September teal, spring squirrel and turkey seasons, hogs are fair game. And hogs can now be taken at some WMAs during lottery alligator season while checking gator lines. (Any caliber rifle can be used during this season, and it is legal to drive a boat with a loaded weapon at this time. I’ll post my alligator hunting story soon.)

However, some WMAs still have the hog portion listed in the hunting pamphlet with specific season dates, so read the regulations carefully.

During dove and teal season, the typical small game regulations of lead shot BB and smaller (or non-toxic F shot and smaller) are legal on WMAs.

During bow season hogs can only be taken with archery equipment until Oct. 5 when small game season opens, then the use of a shotgun or rimfire rifle becomes legal.

As with any rule change, I called and emailed the Louisiana Department of Wildlife and Fisheries for confirmation to be sure I was interpreting the new regulations correctly.

With an okay from the game wardens, I eagerly anticipated the 12 p.m. dove season opener last Saturday. My plan was to check out a few mud holes before hitting the fields to knock down some doves.

At noon I crept to my favorite hole to do some scouting for my wife’s hunt the next day. I could smell the hogs, but none were in the hole and I thought I had missed out.

Suddenly, all hell broke loose in the thicket to my side as a huge pack of hogs took off in all directions. I gave a quick burst to cut off the largest herd, then I unloaded all three shells into the two biggest hogs running about 30 yards away. Some low-powered dove shells were used to ethically finish off the job from up-close.

The good news was that within three minutes of the 2013 hunting season, I already had two 200-plus pound sows down.

The bad news was that I was almost a mile from my vehicle with two 200-plus pound sows down.

And even worse, I had made the mistake of working out my legs in the gym the day before. But I managed to load both hogs on my dolly and chugged through the woods in the 95-degree heat with my 415-pound payload.

Note to self: never workout legs the day before hog hunting again.

The next day, I hiked my wife in the woods to sit by the same hole. She was looking for her first-ever public land kill and first-ever hog kill. At about 9 a.m., a small hog ran through but she wasn’t able to get a shot.

When I went to get her around noon, she was frustrated, but I told her not to give up because hogs get thirsty in the middle of the day. We crept deeper into the woods to a few water holes and creeks I knew, and sure enough, I spotted a pig drinking in no time.

Laura blasted the 80-pound razorback boar from 40 yards, and it fell into the water. After a quick finishing round, I threw him over my shoulder and we hiked out a happy couple.

These pigs were taken with high-density BB and T shot. I wouldn’t waste my time with a shotgun unless I had proper ammo. I find that these sizes are more efficient in getting hogs than the usual #00 buckshot or small rimfire rifles.

The problem with larger buckshot is minimal blood trails, and the fact that not enough of those 15 pellets hit the hog to stop it. With a full choke spraying smaller BB (.18 diameter), BBB (.19), or T (.20) shot, more of the 50 – 100 pellets will slow down the hog, so a quick finishing round can be taken easily.

With rimfire rifles, unless you get perfect brain placement, the hog runs off never to be found. Many of my friends have wounded and lost countless pigs from buckshot and rimfire rifles. I haven’t lost any of the large hogs shot with my tungsten shells, even though all of those hogs were on the run from over 30 yards away.

However, one time on a duck hunt, all I had was 3 ½-inch steel BBB. I hit a hog at 15 yards with all three shells. I thought for sure I’d get my animal, but I found nothing but blood on one side of the track as the lightweight 7.8 g/cm3 steel had no penetration power on the tough hog even at close distance. I vowed never to use steel again except for finishing shots.

The more-effective high-density shells made with combinations of tungsten, iron, copper, tin, bismuth and nickel are usually around 10 percent denser than lead, which is  11.34 g/cm3 density.

Federal also makes the expensive Heavyweight, which uses the heaviest material on the market at 15 g/cm3. Dead Coyote makes the largest T shot shells, but they cost a lot. I was able to find cases of the fast-shooting 1450 feet per second tungsten powder-made Federal Hi-Density Ultra Shok BB and #2 for $1.50 a shell.

All of these shells mentioned are non-toxic and legal for waterfowl hunting. This really helps on those long-range public land birds I hunt. The speed, larger size and heavier weight of the pellet will give the best killing power at longer ranges.

Some people say high-density costs too much for hogs, but after filling my ice chest with three pigs this weekend for only a few bucks in ammo, it’s worth it to me.

Thanks to the LDWF for allowing Laura and me to get an early start on helping with the hog problem on WMAs this hunting season!