His mission is to eradicate hogs, and he’s pretty good at it

After working all day, most people enjoy sleeping at night but not Trey Dupre, aka atchafalaya_assassin on Instagram.  Most nights of the week from March through September, nighttime hog hunting season, he is out there doing his best to help thin out the destructive and invasive wild pig problem that plagues Louisiana.

Dupre just doesn’t go to take out a pig or two and call it a night; he goes to complete the mission of hog eradication. On average, he puts down around 20 pigs per night. One night this year, he took out 47 hogs by 1 a.m. The photo of his truck bed loaded didn’t even show five of the larger pigs he had already donated before heading to his final spot of the night. On that night, at the second spot, he put down 19 out of a sounder of 29 pigs.

Looking for an exciting hunt?

Dupre loves hunting and fishing and has been a diehard deer hunter. Now his passion is nighttime hog hunting; he said there is no type of hunting as exciting.

He enjoys eating the pig meat himself, but likes to donate as much as he can to members of his community.

This nighttime pig hunting endeavor started slightly more than two years ago, when Trey was instantly hooked when he looked through a thermal-imaging scope and saw all those hogs that were invisible to the naked eye.

Want a place to hunt?

Talk to farmers. Dupre said to try talking to farmers to see if they have a hog problem that needs fixing.

“Be prepared and check aerial maps and drive the area in the daytime to see where it’s safe to shoot. Also search for hog sign,” he said.

However, not much scouting is needed with Dupre’s method. The farmers tell him where the fields have been getting destroyed and when fresh farming has been completed in a particular field. Dupre knows the hogs will show; all he needs is to apply his drive-around method to find them.

The pig problem hits home hard for these farmers. Sure, hogs destroy roads and forests, and they spread disease, but it’s the crops and cropland that incur the most financial damage.

Hogs begin their destruction as soon as tractors till up the ground. The sound of a tractor and smell of dirt calls them in. Dupre often has success hunting freshly chopped fields without any crops yet planted.

Hogs will eat anything

Hogs are not picky and will destroy every type of cropland, including rice, sugarcane, soybeans and corn.

But once the crops are nearly ready to harvest is when the hogs really attack, eating the crops before the farmers get a chance to harvest.

Dupre calls both the Louisiana Department of Wildlife and Fisheries DWF and local sheriff’s office before he goes hunting.

On full moon-lit nights, Dupre said pigs come out best in the middle hours of the night, but on dark nights, hunting as soon as it gets dark is most successful.

He wears whatever clothes he wore from work. Colors don’t really matter, but wearing lighter-colored clothes on brighter moon nights can keep a hunter from sticking out.

He likes to take out bigger boars and keeps some trophy skull mounts. He has taken down a few of these smart, elusive boars exceeding 300 pounds.

How to sneak in without spooking the hogs

Dupre usually takes one or two friends or kids to experience the action. They drive around the well-known roads through the fields using Pulsar thermal-imaging scopes that detach with quick-release mounts to spot hogs from the truck.

“The trick to seeing the most hogs is to keep moving,” he said. “Waiting around will only waste time, so I drive around until I spot a sounder. Then, I park my truck about 200 to 300 yards from the pigs and take to the field by sock. Sometimes I wear boots, but being quiet in the dark is important, so I’d rather the shoeless approach.”

He sneaks up to 60 to 70 yards from the sounder before setting up.

The most important part in getting close is using the wind and constantly looking at the hogs in the scope as the group walks closer in a single-file line.

One pig usually stands on guard outside the sounder. That guard hog’s body language is what Dupre focuses on because the other pigs are busy feeding. Also, seeing which direction the hogs are moving is important to getting set up at the correct distance. 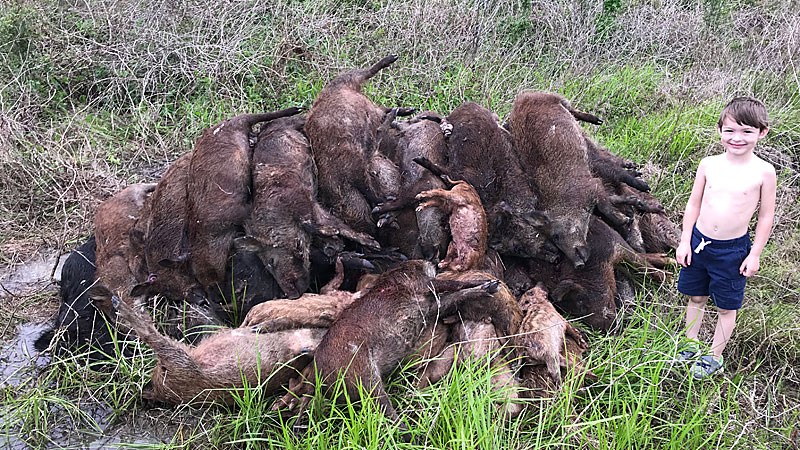 Wind is your friend

Since noise is a big concern, Dupre has greater success on windy nights with 10 to 15 mph winds. When downwind on a breezy night, the hogs simply can’t hear or smell the hunters’ approach.

The hunters set up in a tight pack kneeling 1 to 2 feet from each other using Primos trigger-stick tripods for their gun rest and over-the-ear style Walker headphones for hearing protection. The group goes for an initial neck shot on the first shot with a 3, 2, 1 countdown.

That’s when the real action begins. After the first shot, pigs explode in all directions, and quick shooting is how Dupre takes down so many. “Aim around 5 to 6 feet in front of a pigs head on a hog at full sprint. A hog trotting slowly or in soft mud only needs about a 1-foot lead. It’s similar to duck hunting ,and the pigs are fairly easy to hit on the move,” he said.

Dupre doesn’t use a noise suppressor, but some of his friends do. The suppressors can definitely keep from scaring nearby hogs. However, nearby tree lines muffle the sound, and Dupre often finds the next sounder of hogs feeding just a mile or so away. Sometimes, hogs come right back out into the open fields soon after he shoots.

Another problem animal is also sought on these nights — the coyote. Dupre has a dump site where the non-edible hog parts are hauled to, and he makes a pass with his truck to that area periodically. He usually shoots a coyote or two every night, once taking seven in one outing.

Additionally, the lack of hogs and coyotes seems to be helping the nearby hunters. One long-time rabbit hunter now sees five-fold the amount of rabbits he has ever seen. The nearby deer hunters are seeing and shooting far fewer pigs in the surrounding woods.

Are his efforts helping the farmer?

But are the hog numbers decreasing? Dupre is not so sure.

Last year, his group removed 1,187 pigs from these fields, yet on the first night of hunting the same fields this year, they found 105 hogs in one sounder, he said. In one 500-acre field, he counted more than 200. Dupre and his crew have already taken out 167 hogs this year, and he will continue to try his best to eradicate these destructive pests.

If any farmers near St. Landry Parish have a hog problem or anyone wishes to learn more about Dupre’s hog-hunting adventures, they can find him on Facebook.

Should we have a pig bounty?

Dupre wishes there was a bounty on pigs and thinks that’s a potential solution to help with the Louisiana’s huge pig problem.

But in the meantime, the Atchafalaya Assassin will be out there putting down pigs most nights for the rest of this summer nighttime hog season. Well, except for taking Sunday nights off since he says he actually needs some time to get some sleep.

“The gratification knowing how much we are helping our Louisiana farmers by saving their crops, mixed with the thrill of hunting hogs with a thermal, is unexplainable with words,” he said.

Travis Dupre sees all the action through his XQ38 Trail Pulsar scope with a traditional reticle; it’s the most-expensive part of his setup, costing $3,400. He can see cows at 2 miles with the scope, and he can see defined leaves on trees at 400 yards in any nighttime condition.

There’s never any question with thermal imaging if the animal is the intended target. He suggests spending at least $1,800 on a decent thermal scope to night hunt. Cheaper night-vision scopes can work, but they have a much smaller range of effective use, said Dupre, who shoots an AR-15 chambered in 7.62 x39mm with 20-round clips.

Since he typically fires around 100 rounds a night, he opts for less-expensive, 122-grain hollow-tip ammo by Tulammo that cost only 20 cents a round when bought in bulk. These rounds will usually take down any pig within 200 yards with a 6-inch drop at 200.

The longest shot Dupre ever made on a hog was nearly a quarter-mile, but he doesn’t often take long-distance shots, most being within 100 yards. The pigs expire quickly from the hollow-tip bullets, seldom making it more than 30 yards after being shot.