It’s been one rainy year this summer, but soon the woods should dry out for the fall months. Once the popular water holes of an area are located, harvesting thirsty hogs and deer is a near sure bet this fall.

With no hunting seasons open during the initial summer months, by September, the hog hunting action is on fire; well for anyone who can handle the heat. Not everyone has opportunities of nighttime or baited yearlong private land hunting, but there are around 6 months of open seasons on most public lands. Since I’m a public-only outdoorsman, this is more than enough time for getting as much free wild pork as my freezers can hold.

It’s during these drier months that I take most of my hogs. In both 2017 and 2018, from mid-September until Thanksgiving I didn’t go a single weekend without harvesting one or more hogs, totaling 76 pigs in those 20 action-filled weekends. Being in a pig contest made it easy to keep track and write stories on all those self-filmed hunts. The key to my success for getting into close range while using the archery or small-game weapons allowed was targeting water sources.

First, finding all the small water sources of a particular area is important. I start by internet scouting Google Earth and other maps. I’m looking for small water holes, typically 2 – 15 yards in diameter, located a good distance from large rivers, bayous and lakes. Larger water sources make it harder to pinpoint where the animals go to drink. 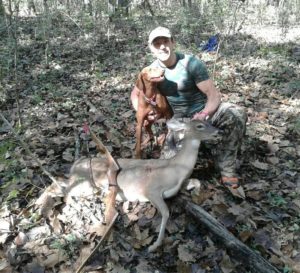 Most water holes are small and hidden under the treetops of the best aerial maps, so my next step is to hit the ground running all day long. I typically cover 100-140 miles per week by foot year round as an ultra-marathoner. These long scouting adventures to learn every inch of a section of land is much more fun than the multiple hours a day I spend on the treadmill or track on my days back home.

In the early season, the hogs and deer may be closer to roads. However, by the second week of the squirrel season most hogs smarten up and move far away. Their movement patterns begin to become more nocturnal, yet this doesn’t matter for hog stalking. I know the remotely located wallows the pigs will be laying in for the day.

Sometimes I see hogs first for an easy shot. However, a startled pig in thick cover often doesn’t bolt right away. I grunt loudly which usually makes them curiously stop.

Bug spray and human smells will have hogs and deer seeking a new place to drink. Before I start hunting, I usually jump in a muddy water hole to get a good swamp cover scent. This eliminates the need to use expensive scent-free products.  Every couple of hours I repeat this mud bath to keep human scent to a minimum. It’s also a great way to cool off.

I don’t use bug spray of any type, so wearing a mesh ghillie suit serves as both a bug deterrent and perfect leafy-season camo. Still I get bit by hundreds of mosquitoes and water bugs daily; it’s all part of the hardcore hunting experience.

There is no reason to wake up early for stalking hogs. They tend to stay near their water source to feed at any hour of the day no matter the temperature. However, smart giant boars usually move in only low light hours, but I take most boars by waking them up from their daytime slumber. If a still hunt is in mind, setting up for an evening sit near a water hole can produce many sightings in the afternoons. 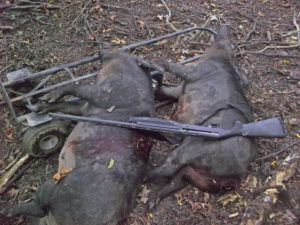 I’ve always had more success by hiking to many water holes in one hunt than just sticking put at one and hoping to get lucky. The odds of success will increase with the more ground covered.

An ultra-light pair of old cross country spikes is my favorite shoe to hunt in. I typically jog through the woods not worried about any dry areas. Sometimes I jump a hog in the process and chase it down. I flank around for a running shot or find where that tired pig is hiding. These animals may be fast, but they have little endurance, make predictable movements and aren’t used to being chased.

Once I get within 150 yards of the water hole, I slow to a snail’s pace with the wind in my face. If pigs are heard or spotted, I often crawl on all fours since the archery and small game weapons I use require getting real close. Nothing is more fun than exploding up from a prone position and blasting away at a large sounder of pigs.

The first year the state allowed pig incidental take was in 2013. I began on opening day by stalking my favorite wallow patch I used to bow hunt. Sure enough, I jumped up a large sounder of pigs that took off in every direction from the three connecting water holes. The biggest two pigs were moving slower than the rest to climb out of the soft mud. I sprinted all out to get in range using non-toxic T shot to drop the biggest two as they hit full speed.

This was when I carted out all my animals, so I used a dolly to haul out over 400 pounds of pork at once. I was instantly hooked on this new style of hunting and took down 17 hogs that dry September.

The next weekend, I tried loading up three hogs inside my Ford Escape’s roof rack at once. By the time I got to the camp to clean them, the Thule was broken beyond repair. 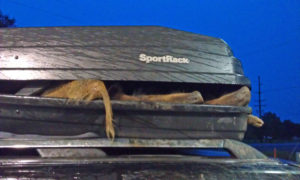 Smartly, I now clean and pack out all my hogs within 15 minutes where I shoot them as I’ve discussed in several previous articles. This way I’m back to hunting within the hour after jogging out a backpack full of quality game meat. Once I took out eight pigs throughout a full day’s hunting using this method.

Soft mud next to water holes is the easiest way to find large buck tracks in dry woods. When deer hunting the dry months, I typically choose trees to climb that are in sight of a water hole with many sets of fresh tracks. Also, I have many deer encounters during pig wallow stalks which is why I often use a bow.

Many Octobers ago, I made my only archery deer-double hunting a natural funnel that channeled toward a commonly used water hole on the old Three Rivers WMA. On that hunt, I hadn’t realized the fiber optic insert from my first pin had broken off while traversing the thick cutover before daylight. A group of does walked through early in the hunt. Unable to see my pin clearly caused a spine shot. I emptied my quiver frantically quickly finishing off the deer. 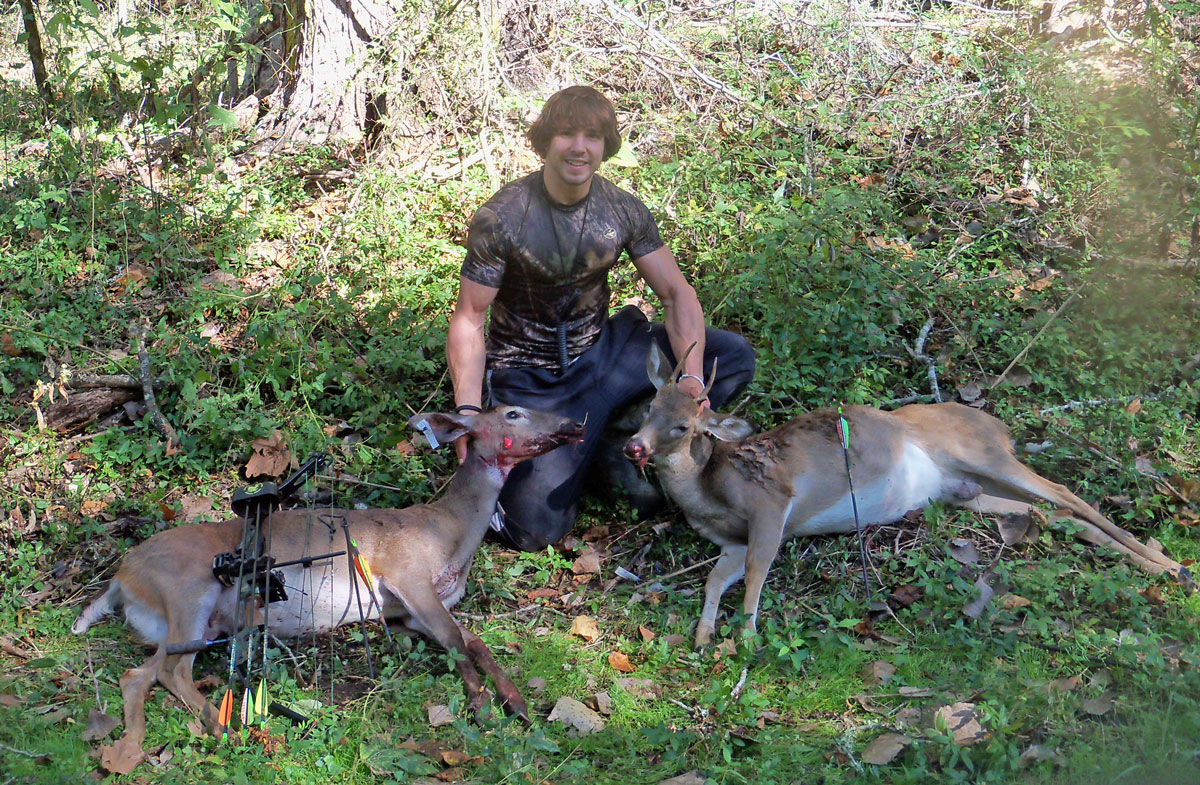 After retrieving my arrows, I grunted up a buck and was able to get a buck on a perfect 15 yard shot making sure to use the correct hard to see metal-only pin through the peep. Those were the years before I shot many pigs, so I was ecstatic about all that venison.

A productive water hole can continue to produce year after year. Nearly a decade later, I finally went back to that area. I set up 17 yards from that same water hole and harvested a nice doe with my 70# recurve. I nearly doubled-up again that day, but the hog that passed in range offered no clear shot.

The hog hunting rules are found in not only the hunting pamphlet but the trapping pamphlet as well. With small game ammo or archery weapons allowed before deer season, be prepared for attacking hogs. These weapons, though lethal, don’t always end up with a instantly dropped pig. If a smaller hog is taken be ready; odds are a large sow is near and more than willing to run towards the hunter.

Typically I use one of my several 1.5-pound vintage Bear recurve bows, a 2-pound survival crack-barrel rimfire 22mag, or a 4-pound fold-in-half packable 12-gauge shotgun. All of these weapons cost less than $200 each for a hunter on a budget. These ultra-light weapons make for easy carrying on all-day treks, especially when jogging or crawling through the thickest woods.

Keep in mind, shooting max-powered custom 2-ounce loads of TSS from a single shot 4-pound 12-gauge will pack quite a punch. Once again, it’s all part of the hardcore hunting experience that I love!

Now is the time to find water holes for early season success. Hunting big game in the winter is always more fun without pressure to harvest meat knowing the freezer is already full.

Legends of the Outdoors – Warren Womack

Warren Womack of Clinton is a successful deer hunter who has written descriptions of his successful hunts full of facts and methods. […]

Blood splash is most likely caused by a quick and unusually large rise in blood pressure which results in the rupture of blood vessels. […]