It is a well-known fact that nutrition is the key for growing trophy whitetails in Louisiana.

White-tailed deer can be found throughout Louisiana, from northern Caddo Parish southward to the mouth of the Mississippi River in Plaquemines Parish. This includes all habitat types; bottomland hardwood forests, pine forests, mixed pine/hardwood forests, swamp forests and coastal marshes.

The state wildlife agency’s restocking efforts in the 1950s and 1960s made it possible for Louisiana to be blessed with this important resource.

Deer hunting is the No. 1 hunting activity in North America, providing game departments with much-needed revenue. This is why the issue of chronic wasting disease is so important; CWD could dramatically reduce hunting recreation in this country and greatly reduce much-needed revenue for wildlife management work, both game and non-game.

For the most part, the entire state has a good deer population. Landscape changes, particularly urbanization, have created issues for deer in some areas.

Changes in timber-management practices have also taken a toll on deer numbers. The change from a mixed pine/hardwood forest to a forest dominated by pine timber has had an impact on deer numbers across the state. In the early days, the bottomland hardwood forest parishes had the highest deer numbers, but as land clearing in those parishes reduced deer habitat, the piney woods parishes became important.

Restoration of bottomland forests in recent years is creating more habitat in these parishes and harvest numbers are beginning to reflect this.

When it comes to producing trophy bucks, typical deer that score 160 or more points and non-typicals that score 185 or more points (based upon the Boone and Crockett Club scoring system), it is clear that only certain parishes have the ability to consistently grow them. Nutrition is the key for antler growth, and many parishes simply cannot provide this nutrition.

Simply feeding of corn will not provide the quality nutrition needed for growing large antlers. Feeding corn during fall and winter on habitat where native mast is limited will keep deer fat and healthy and in good shape going into spring green-out. Antler growth takes place during the spring and summer, and bucks need nutrition that is high in protein — and feeding corn will not do this.

Marsh habitat and swamp forest habitat does not provide the nutrition necessary to grow bucks with trophy racks. Supplemental feeding with a protein feed will offset the lack of nutrition in native habitat, but it is very expensive and primarily used in deer pens and shooting preserves.

Forest-management practices that promote dominant stands of pine timber do not provide deer with the necessary nutrition to grow big antlers. Supplementing with food plots does improve nutrition, but most clubs and landowners do not and cannot do this on a large-enough scale to really have an impact on the deer herd.

Mixed pine/hardwood forests can provide the nutrition needed, if the timber is being properly managed and the hardwood component makes up a least half of the forest stand.

For the most part, consistent production of true, trophy class bucks is limited to the parishes in the Red River and Mississippi River drainage system. This fertile crescent, with its bottomland hardwood forests and associated agricultural crops, provides the nutrition needed to grow bucks with big antlers: acorns and hardwood mast during fall and winter, soybeans and grain crops during spring and summer and winter wheat during fall and winter.

This region of Louisiana is similar to states in the midwest where hunters go to kill a true trophy deer.

I have been keeping track of the trophy buck kill for many years, and the data clearly points out which parishes consistently grow trophy bucks. The top buck I have in my books for Cameron Parish is a 1382/8 typical; a nice buck that many would mount, but far short of the 160-inch mark.

In 1963, a non-typical buck scoring 167 was killed in Terrebonne Parish, a little short of the 185 mark. For Vermillion Parish, I have a 1167/8 buck that was killed with a bow; a nice deer but not what would be considered a true trophy based on the Boone & Crockett scoring system. It is clear from the our state records that marsh habitat is not the place to go for a trophy.

In our swamp forest habitat, St. John has produced several 140-class bucks. Salvador WMA in St. Charles has produced a 120-class buck. There was a nice. non-typical buck killed in Lafourche Parish in 2013 that scored 1696/8 non-typical, again, short of the 185 mark.

The swamp habitat comes up short in trophy buck production. I hunt the swamp forest on Pearl River WMA, and believe me, one will not kill the new state record in that area.

Except for a few trophy bucks killed in the Atchafalaya Basin south of I-10, a hunter needs to stay north of the interstate if he wants to kill a true trophy buck. There are a handful of Booners in the books from St. Mary and St. Martin parishes, but don’t expect the next state record to come from the lower basin.

The Florida parishes in southeast Louisiana have been credited with a few true Boone & Crockett deer from past seasons, but this is an area that has really been impacted by landscape changes.

Dairy farms and associated farming activity have disappeared; farming for the most part ended in 1985, and urbanization has really taken a toll, especially after Hurricane Katrina. Changes in forest management, with forests becoming dominated by pine timber, have reduced the ability of this region to produce trophy bucks.

A buck that scores 130 B&C should be considered a top-end buck, and clubs and landowners that pass up adult bucks that score 12 to 130 thinking they are going to get bigger are making a mistake. East Feliciana Parish grows quality deer, like the 1467/8 typical and the 1636/8 non-typical killed this past season. Again, these are exceptional deer and not the norm for this region.

Northwest and Central Louisiana have produced B&C bucks in the past and still do. One problem is that the Louisiana Department of Wildlife and Fisheries does not get many of these bucks officially scored each year, so the data is lacking for this region.

The parishes that border the Red River drainage produce trophy deer, as evidenced by the 1705/8 typical buck killed in Natchitoches Parish this past season. Bossier Parish has the No. 1 typical buck, a 1844/8-inch trophy killed in the 1960s. Loggy Bayou WMA has produced a few 150-class bucks and is a good area for public land hunters.

National forest land in Central Louisiana provides opportunity on public lands, but a 130-class buck is probably the top end for this habitat. Forest management on national forest lands is geared to long-leaf pine restoration, which is not considered trophy deer habitat.

Where the big ones walk

For a hunter looking for areas that consistently produce trophy class bucks, the alluvial soil parishes bordering the Mississippi River are the places to go.

As previously mentioned, the bottomland hardwood forests, with associated farmland containing high quality forage crops, is the place in Louisiana where the big ones walk.

A glance at the state records confirm this. Just visit the LDWF website and check them out. If a hunter wants to kill a true Boone & Crockett buck, this is the region of the state to go. 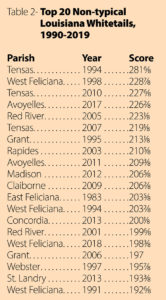 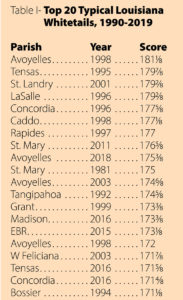 The parishes of Tensas, Madison, Avoyelles and Concordia lead the list of typical and non-typical B&C bucks. These parishes consistently win big buck contests every year. Look at the top bucks at the Sportsman Show this year; the 1753/8-inch typical McPhereson buck, killed in Avoyelles Parish, took top honors. Three other trophy bucks were killed in Avoyelles, along with bucks from Concordia, Madison, Tensas and Pointe Coupee parishes.

In 2018, Amanda Smith took top honors at the show with a 226 2/8-inch non-typical buck killed in Avoyelles. Other parishes where quality bucks were killed last season include: St. Landry, West Baton Rouge and Richland.

Hunters who do not have land to hunt have opportunity to hunt B&C bucks on numerous WMAs and refuges in the bottomland hardwood habitat.

Tensas NWR, Big Lake WMA, Richard Yancey WMA and Lake Ophelia NWR are just a few where trophy deer have been harvested. The key is to hunt the food sources big bucks are eating and to hunt during the rut, when these bucks begin chasing the does.

It must be said that a Boone & Crockett deer is really somewhat of an oddity, an animal that represents less than 1 percent of the annual buck kill in Louisiana.
Clubs and landowners that develop management plans to only harvest B&C bucks are going to be sorely disappointed. A B&C buck could show up in any of these parishes, but based on the record data, there are specific parishes where it happens more frequently.

In 2007, I made the statement that our next state-record typical would come from Avoyelles Parish, and within the next 10 years. This did not happen, and a close look at the records show that not many high scoring bucks have been killed since 2010. This led me to say a couple of years ago that a new state record may never happen, due to changes in the deer habitat in the state.

Another factor is that Louisiana deer hunters are getting older; the baby boomer generation has been the driving force for basically all hunting activities over the past 20 years, and we are slowing down. The focus now seems to be on passing along the hunting tradition to the next generations, which is more important than a record buck.

Deer season to close in portion of East Carroll Parish near Miss. River

Deer hunting season will be closed beginning Tuesday, Jan. 21, on all lands east of the west Mississippi River levee in East Carroll Parish due to flooding. […]

These three bow manufacturers have great additions for 2020. […]

The Mega Matrix, which fits in between the 2-inch Matrix Mini, the original 3-inch Matrix Shad and the 5-inch Monster Matrix, works great on redfish. […]

About Dave Moreland 213 Articles
David Moreland is a former wildlife biologist with LDWF, having served as the State Deer Biologist for 13 years and as Chief of the Wildlife Division for three years. He and his wife Prudy live in Baton Rouge and own property in East Feliciana Parish.