Louisiana’s deer season is right around the corner. It’s time to start getting things lined up for the promise of opening day.

The start of deer season is just around the corner, so it’s time to start getting things at the camp ready. Here are some suggestions:

It was a hot day for baling hay, but any day that is right for making hay is going to be a little on the hot side in the South.

Clyde Risher stopped for a moment in the shade of an oak and searched the limbs for the coming crop of acorns. Deer favor acorns, and Clyde is a dedicated deer hunter. For him — and thousands like him — deer season never closes, only the days when it’s legal to shoot them end.

As July transitions into August, whitetail fawns dropped in July begin to travel with their mothers. For hunters such as Risher, a farmer who is in the field most every day, the sighting of the first fawns is a key to determining the first rut for the coming season. That’s important because bucks will lose their inhibitions and make themselves available targets.

“When a fawn is born they have little or no scent,” Risher said, “or that is what I was told by a deer biologist … at a seminar about deer. For about two weeks, the mother visits the fawn and feeds it, perhaps move it as it gains strength. So when I start seeing fawns following their mothers, I can count backward the 190 to 210 days, minus the time it lay still, and I have the probable date of the first rutting period.”

According to Risher, if the first fawn is spotted July 15, then the fawn probably dropped around July 2. Split the difference on gestation and count back 200 days, and you can be pretty confident the doe was bred around the last week of November.

Not exact science, but a good starting place. 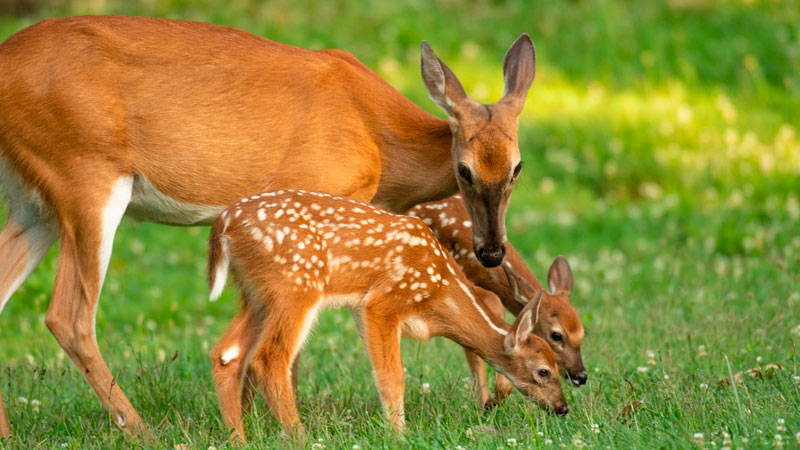 Veteran hunter Tommy Hemphill has targeted deer for most of his life, and in the past few decades, he has discovered the importance of keeping a hunting journal. It contains notes about deer sightings, behavior, how those behaviors correlate with moon phases and solunar tables.

“It’s not something that will help the hunters who have never done one,” he said. “But it’s never too late to start. I record the first food I see deer favoring, then the next and then the next. One example is soft mast. Persimmons begin to fall in September, unless we have a dry summer. The persimmons on my place are gone by mid-October. The honey locust pods are the next to go. By this time, the first acorns begin to fall.

“Deer know all these times and places as well as you know your own kitchen and pantry. Having a journal allows hunters to select a stand that is likely to produce a sighting.”

Hemphill has found that solunar tables indicating major and minor activity times are quite accurate when averaged. Naturally, droughts, hurricanes, habitat removal or enhancement and hunting pressure add to the mix. Based on his journal, Hemphill begins searching for mast well before the opening of archery season, because promising food sources, even if they will be gone before the season opener, attract deer. Trail cameras record the deer visiting the food sources and give the hunter some indication of herd numbers and conditions before the first arrow flies.

Most hunters accept establishment of food plots as a broadly beneficial practice for multiple wildlife species. Rabbits, deer, turkeys, songbirds and even predators are attracted to these green patches.

For deer, they are a sure attractant.

In terms of existing food plots that just need to be replanted, August and September stand out as the most-opportune time for this activity.

“Assuming a food plot has already been established, soil testing completed and proper pH maintained, the choice of a planting becomes pretty academic,” said Bronson Strickland of Mississippi State University. “An excellent mix, the one that I use, is this: 30 pounds of oats, 30 pounds of wheat, 12 pounds of crimson clover and 5 pounds of arrowleaf clover per acre. This will feed deer for a good five months.”

Strickland said that hunters who want to add rye should be sure to add cereal rye, such as Elbon Rye and never just rye grass.

Oats will be the first of the seed to grow, followed by the wheat and clover. Strickland considers this a good general mix for most all soils when properly prepared.

Fertilizer has become a costly commodity over the past few years as the cost of production and transportation have soared. Still, where field and forest edges allow, fertilizer will add to the nutrients in native browse. Some companies are using chicken litter, the cake that remains in a commercial chicken growing house when the birds are removed, and treating it to create an organic fertilizer. The price for a 70-pound bag is about half the price of commercial chemical fertilizer such as 13-13-13. Look for it at locations that sell organic gardening supplies.

Chicken farmer Andy Wedgeworth has used this organic fertilizer on his food plots. He said the organic material boosts growth and lasts longer than commercial fertilizer.

Late summer and early fall is a good time to move stands. Hunters know stands become stigmatized because deer begin to associate people with the structures. Hemphill has favorite shooting houses and tree-stands that deer have learned.

“(Deer) step out of the woods, and the first thing they do is look at that stand to see if there is anybody in it,” he said. “Instead of moving the stand, I just made a dummy and put a hat on it. They get used to seeing a hat in the stand, so when I’m there, it looks just like it always does.

“I guess, all this said, any changes to stands need to be made early, so the deer can become acclimated to the changes before season begins.”

Boots on the ground

In a military sense, boots on the ground indicates the number of soldiers required to get a job done. For the deer hunter, it should signify the number of hours walking, looking, checking browse and available mast crops.

Hunters should be able to read the woods, seeing where deer have been without seeing the tracks. Dropping are, of course, a dead giveaway, but so is a browse line. Plants such as green briar, honeysuckle, strawberry bush and even young oaks will show the evidence of browsing.

Trail cameras cannot be out too early. Capturing images of bucks as they grow antlers is fun and educational. Antlers in velvet always seem larger than when dried, but the drying process marks a change in a buck’s hormone levels. Bucks will rub the drying velvet against trees and bushes to remove it from the hardened bone antlers.

Locating these rubbing sites is a good way to locate a buck’s probable core area. This core area is perhaps the most-important find a hunter can make. Since it is a place where the buck feels safe, has escape routes and good bedding cover, he is apt to be found there all during his life, unless he or the cover is removed.

About David Hawkins 3 Articles
David Hawkins is a freelance writer living in Forest, Miss. He can be reached at hawkins2209@att.net.