Dragging bass up through the thick stuff at Venice is a lot of work — and oh-so-much fun.

Axl Rose wrote the lyrics to Welcome to the Jungle in the mid-1980s while visiting a friend in Seattle, but inspiration for the song actually came from an encounter he had with a homeless man in New York.

Trying to scare Rose, then a young runaway, the man yelled, “You know where you are? You’re in the jungle, baby; you’re gonna die!”

Though certainly less morose, anglers fishing south of Venice with Jeff Bruhl have probably had similar feelings. A nuclear pharmacist by trade, Bruhl sheds his smock every year at this time, throws on a fishing T-shirt and hacks his way into the thickest, meanest, nastiest stuff that Ol’ Man River’s supercharged, nutrient-laden waters have sprouted along its roiling banks.

Rather than a machete, Bruhl’s tool of choice is a heavy flipping stick threaded with thick line and tipped with a weight so stout it seems better suited to be shoved down the barrel of a musket. He’s there for the bass, the big ones that are arrogant in their certainty they’ve found just the right hiding spot, the only one on the river entirely impervious to predators.

This time of year, Bruhl regularly humbles them. 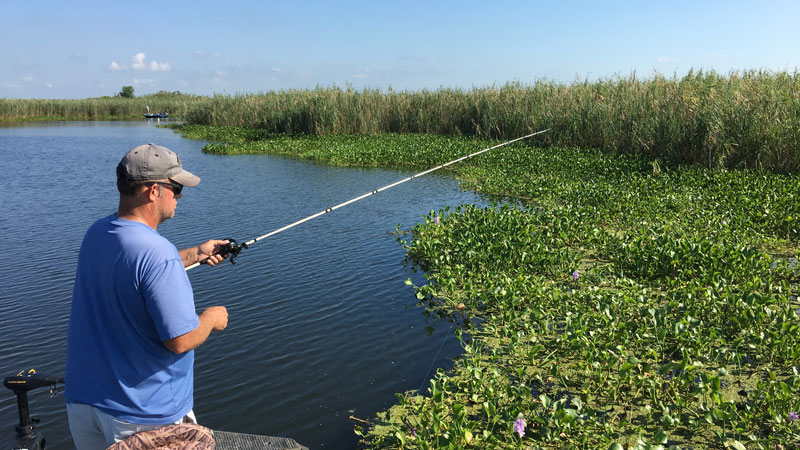 August marks the month most years when bass fishing begins to go bananas along the cane stands that seem endless and eternal south of Venice. The reason is the height of the Mississippi River. Heavy storms and snow melt across the Midwest shoot it skyward in the spring, and all that water continues to work its way down during the first half of the summer.

By August, however, the crops up north are tall and lush, and the riverbanks are verdant. All that vegetation sucks up the falling rainwater before it can reach the river, and that means, way down here in the Bayou State, the Mississippi becomes a relative trickle.

That’s bad news for the bass, but really good news for Bruhl. The fish that spent most of the past eight months so far back in the jungle it would take a bucket truck to harvest them are now within reach. They’re frequently still in the thick stuff, but now on the edge of open water that supports boats like Bruhl’s 20-foot Gator Trax.

To know when the time is right, Bruhl begins tracking the height of the river in July.

“You’ve got to look at the New Orleans gauge,” he said. “Five feet is good, 4 feet is better, 3 feet is the best. It really doesn’t get too much lower than 3 feet, but as the river keeps falling, it just keeps getting better and better.

“If you plan on coming in August or September, you need to always check the gauge.”

But that’s not the only important factor. Tide direction and height can be critical in Venice, Bruhl said.

“I want to go down and fish at the bottom of the tide,” he said. “Sometimes you can’t do that. You might not be able to get down there until the afternoon, and the tide’s rising. But ideally, if you can fish the morning, you want the tide to bottom out about 10 or 11 a.m.

“You don’t necessarily need to have a big, wide range. The range is not quite as important, just as long as it’s a half-foot to a foot, and low tide is about the middle of your fishing trip.”

Not only does a falling tide pull bait out of the backwaters, it conspires with the low river to stack the odds in anglers’ favor.

“Even if the river’s at 4 feet, a low tide might lower the water another 6 inches, which forces the bass along a lot of banks to come to the edge of the canes,” Bruhl said. “So when you flip your bait in, you’re flipping where the fish are sitting. If the river’s at 5 feet, and the tide is up, they might be 3 feet in back of the canes, where you can’t really reach them.”

Punch in at the bank

Productive banks vary considerably with the height of the river and tide, Bruhl said.

“You want a bank that has some depth right along the edge of the canes, maybe a foot or two of water, but 6 inches into the canes, you want it to be dry land,” he said. “Not every bank is like that.

“If you go enough to Venice, you’ll understand that at 4 feet, there might be some banks that are really good, but they’re not good at all at 5 feet. You have to move around and find that certain scenario that’s good at that river height and tide height.”

In addition to depth, Bruhl likes a combo platter of roseau, hyacinths and hydrilla. He’ll use pegged 1-ounce tungsten weights teamed with black/red flake, watermelon/red or orange-tipped Havoc Pit Bosses or Havoc Change Ups to punch through the hyacinths and hydrilla and slide into the tangle of canes that so often hold fish.

“When they’re aggressive on a good day, you’re going to feel a solid thump,” Bruhl said. “If you get a nibble-nibble-nibble, most of the time, that’s bream. But when you slide it down there, and on that first fall, you feel a thump, that’s always good because that means they’re eating (well), and you can rear back, set the hook and turn that fish’s head up so you can yank him up through all that vegetation.

“On days when it’s more of a mushy bite, and you can’t tell for sure if something hit you, they might pull you up under a cane, or if you’re not sure, you’ll hesitate, and then when you do set the hook, the fish is pointed down into the cover, and you can’t get him out.”

That’s especially true considering the size of the fish that call Venice home. Bruhl has caught some 5-pounders in the area, and has had days when he’s caught multiple 3-pounders. He’s also fished with anglers who have caught 7-pounders.

“The chances for big fish increase as the river falls,” he said. “Those big fish, they’re not coming out until they have to. They’ve got a home somewhere, and that’s where they’re staying.”

Sometimes, the river and tides get so low, those fish and others can’t even access the canes. That’s when fishing can get really stupid, Bruhl said.

“That’s the best fishing there is, because you’re going to get lots of bites, and you aren’t going to miss many fish.”

But most of the time, there’s going to be some type of punching involved, and that ain’t exactly a bad thing. In fact, Bruhl rates it as his favorite style of bass fishing.

“It’s a real physical style of fishing,” he said. “It’s right up there in your face. You’re flipping it in there, and all of a sudden, something thumps it, and the water explodes, and you’re trying to get him out of the canes and into the boat.

“There’s no net involved. If he weighed 500 pounds, you wouldn’t get a net. You don’t have time to. If you stop to get a net, he’s going to get back in the cover, and you’re going to lose him. So you’re trying to flip a 5-pound bass in the boat, and it’s just fun.”

Welcome to the jungle, baby. You may not die, but you’ll probably feel like you’ve gone to heaven.

Jeff Bruhl has tackle sleeves that are labeled “Venice,” and he never touches them except for this time of year. What’s stuffed inside of them, in addition to heavy tungsten weights and a vast assortment of hooks, are some fairly ugly baits.

Bruhl is a bargain-bin tackle shopper, but he saves the funky, gnarly lures he picks up for Venice.

“These fish are just so aggressive down here, they’ll hit anything,” he said during a trip to Venice last September. “If I find some baits on clearance for like 99 cents a pack, I’ll buy all I can find, and put them in my Venice box.”

It’s a smart move because on a typical day at the mouth of the Mississippi, an angler might go through 40 or 50 soft-plastics. Many of the bites, obviously, will be from bass, but crabs, bream and redfish also tear them to shreds.

If Bruhl is fishing a tournament or just wants the best odds possible, he’ll go with a Havoc Pit Boss or Havoc Change Up, but if he’s fun-fishing, those baits stay tucked away in other sleeves.

Gary Krouse, a Baton Rouge angler, however, is particular in his bait choices, even down in Venice.

He’s partial to Missile D-Bombs and Creme ST Craws teamed with punch skirts, and he likes to experiment each trip with different weights.

“Sometimes a slower fall and quieter entry can make a big difference,” he said.

Charles Thompson III of Bossier City is building a bass fishing powerhouse at LSU-Shreveport during his second full year as coach. […]