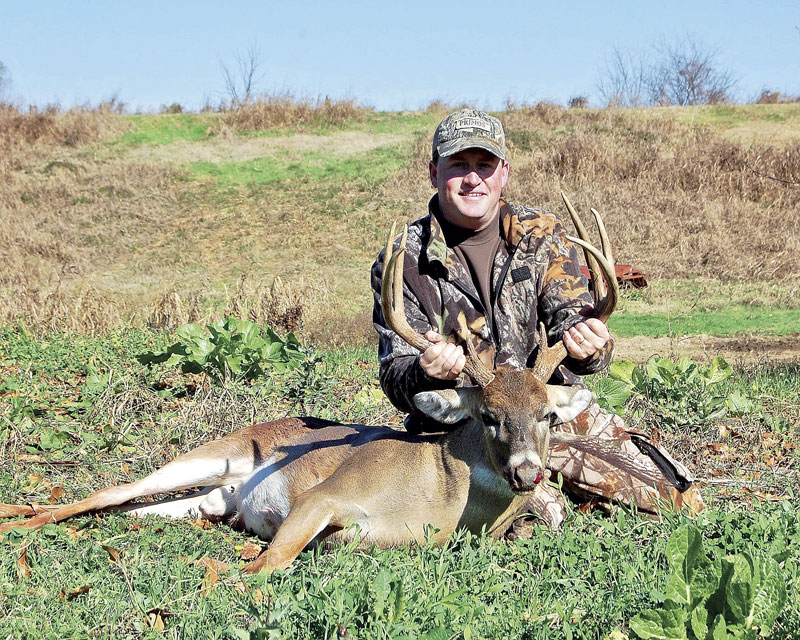 In some cases, they can both be the same person. In this case, that’s me. A story about a few common mistakes made while deer hunting needs no outside contributions, because I have spent a lifetime becoming the expert! If it can go wrong, I probably have personal experience at it.

But just to stay professional, I’ve talked to about a dozen other hunters to help come up with a bona fide list of things NOT TO DO when deer hunting. These are especially true for trophy deer, but apply to most mature deer.

Don’t: Get out of the stand too quickly

One of the biggest deer I’ve ever seen walked out of a scrub brush thicket on the edge of Wham Brake the opening morning of deer season. It was broadside, looking away just 30 yards from my stand. Unfortunately, I wasn’t in the stand, I was leaning up against it, looking at my Blackberry (an old timey iPhone type device). I grew impatient and got out of the stand, wanting to get home to watch an early football game. I had probably been looking down at the Blackberry motionless for 10 minutes. When I looked up, there he was, staring at me, trying to figure out if I was stupid or something. I was. The next second, I was reminded why they are called whitetail. His was flying high in the air as he headed the other way, showing me all the glory of his white tail. Another 10 minutes in the stand, and I would have had the deer of a lifetime.

Don’t: Make too much noise

It’s hard to believe the number of people who drive their ATVs up within 20-30 feet of their deer stands and walk in the rest of the way, or walk through the woods talking on their cell phone. Deer aren’t deaf. If they hear an ATV coming through the woods, or a human voice, they know it isn’t a natural thing. And if they hear you making noise of any kind, they aren’t going near where you are, no matter how many acorns or how much deer corn is there. Too much noise going to the stand is a deal breaker. And, if you make too much noise leaving, you can even spook deer off for the next day’s hunt. They’ve got no where else to go, so if things aren’t right, they will just bide their time.

Don’t just know where the deer are coming to, either. Know where they lay up. Avoid getting too close to those areas traveling to and from your stand.

Don’t: Forget to mask your scent

Think about all these folks you read about who use scent killers and don’t wash their deer hunting clothes in scented detergents, things like that. Think about the ones that focus on the wind direction before they even go to the stand. Think about those that hunt with the wind in their face so deer won’t scent them. You know why you read about those folks? They are the ones killing big, trophy deer and usually, several of them. People that don’t watch the wind and mask their scent? You don’t read about them.

If you don’t take that advice, you are wasting your time deer hunting, again, especially for the big ones. Sometimes you can get lucky, but most of the time not.

Don’t: Move too much

If you are hyperactive, maybe you should go to Surge and jump on the trampolines instead of deer hunting. Being still is second only to masking your scent. It may even be a tie. When a deer walks a trail or steps out into an opening, don’t kid yourself. They’ve usually been hanging back from the edge, looking and listening and sniffing for more time than we can imagine. Sometimes it is hours, just to make sure nothing ahead is posing a danger. The bigger the bucks, the smarter and more cautious they are. That’s how they got to be big bucks.

Move around too much and odds are they will see you. The old myth about “deer never look up” is a real myth. If you hunt a box stand or stand that has been there for a while, the good ones will study it for a long time to make sure nothing is moving in there before they get close. Even if you are in the stand, if you are not totally blacked out, they can see the slightest movement and you’ll send them back to the thicket until tomorrow … or next week.

Don’t: Spook the does and little ones

Doe deer are the bodyguards of big bucks. They always go first and even when they look like they are not looking, they are. Do something to spook them, and you’ll ll never see the ones behind them. Bucks often trail closely behind does, but sometimes they can be almost an hour behind. But they communicate through movements and sounds and body language more than you’ll ever know. If a doe senses something is wrong, she may stomp or blow at you. If you move, she is gone. And any deer behind her will turn tail and ease away. You’ll never know they were there. Usually if that happens, you are already busted.

If you hear a deer snort in the woods nearby and you can’t see it, odds are it already saw you or smelled you and is making it known.

Don’t: Forget to sight in your weapon…or practice

I went hunting with a good friend on his place not too many years ago and he wouldn’t even let us go to the woods until he was sure our rifles were sighted in and we could hit a target 100 yards away. We actually went out behind his camp and practiced.

Fortunately, it all went well. But the point is, usually there is nobody to police you on sighting in your gun or bow and making sure you practice, except you. Seriously, why go to all the trouble to even go to the woods if you aren’t sure of both your gun and your aim?

He told me he learned years before not to take any chances because he had trailed too many poorly hit deer through the thickets, or saw them jump and run when a bullet whizzed past them that didn’t hit them. You can never practice enough and please don’t commit the ultimate excuse here, “Well, my gun was sighted in when I put it up last year.” No. No. No.

About the only time a big deer lets his guard down during daylight hours during the season is during the rut. That’s when the boys chase the girls and throw caution to the wind. They lose their sense of sight and smell and hearing and …well, you get it.

Stay ready because when they come by, they may be on the move.

If you see a doe walking through the woods and she looks nervous, or is steadily turning and looking behind her, nine times out of 10, there’s a buck trailing her. Be patient.

Normally, you can pretty well predict the rut based on past seasons, but if you aren’t sure, talk to other hunters and stay up with comments on hunting social media pages.

Big bucks will travel long distances — and in a hurry — when the rut is on. One hunter reported with photographic evidence that a big buck had been on his trail camera at 2:30 a.m. At daylight four hours later, he was shot by another hunter five miles away. It isn’t even that rare for hunters to take trophy deer that nobody on their club or hunting area has ever seen before, even on a game camera. The big ones will roam for miles when the rut is on.

One of the neatest things about deer hunting is that you can never know for sure what deer will do. None of the “do- and-don’t do” lists in the world are perfect.

You can’t be sure what a certain deer will do on any given day. You can play the odds, but never say never, or you’ll find out that Mother Nature is in charge.

And above all, the more time you spend in the woods, the more you will learn and the more successful you will be. Nobody yet has killed a deer, big or small, while sitting on the couch by the fire watching Gunsmoke on TV.

Don’t guess; get it scored!

Some fortunate hunters are good enough and have great enough places to hunt that they kill big bucks on a fairly regular basis. Good for them. But if you are like most hunters, harvesting a deer in the 130 or 150 class may be a once in a lifetime experience.

If you have killed a good one, do yourself a favor. Get it scored by an official scorer. Don’t be embarrassed if it comes out at 110 or 130. Think of the hundreds of hunters that would like to have taken that same deer.

Especially with younger hunters, get an official score if you can. You might be surprised. And either way, be proud of your accomplishment.

There are also several big buck contests around the state that offer great prizes. Some have prize drawings that can be won by anyone entering the contest. Don’t hesitate to join one of them, again, especially with a young hunter involved.