Six phases to look out for when hunting breeding bucks

For these reasons, it is especially important this season for deer hunters to locate food sources deer are utilizing.

During the breeding season, bucks greatly increase their travel as they search for estrus does. Does and doe groups are scattered across a given landscape, and individual does come into estrus at varying, unpredictable times.

For a buck to find a receptive doe, he must put in a lot of leg work, resulting in reclusive, secretive bucks suddenly becoming more and more visible during daylight hours as the rut ramps up.

One key tactic is to concentrate your efforts on travel corridors and funnels. In my experience, there are two general classifications of funnels that produce best results.

All of these features tend to steer roaming bucks into your line of sight, assuming you have done your homework and have your stands located properly.

The remaining funnel category involves knowing where your does feed and bed.

These areas are magnets for buck movement during the rut. You will catch bucks cruising the edges and perimeters of food plots, agricultural fields, brushy fields and cutovers.

Funnels and pinch points that lead to and from these areas can be dynamite if hunted properly.

Now, let’s break the rut down into six easily identifiable phases or stages. As far as general timing for each phase, I am using the approximate timing I typically observe on my hunting property in West-central Mississippi.

The first phase is called the “seeking” phase, which occurs about two weeks or so prior to peak breeding. This is when bucks are noticeably on their feet more as they begin to seek females. It is typically characterized by an absolute explosion of new scrapes and rubs, resulting in an increase in buck sightings.

The second phase is called the “chasing” phase, occurring about a week or so before peak breeding. The first wave of does is beginning to come into estrus, and bucks are starting to become frenzied in their search and competition for estrus does. Bucks are actively chasing does, and if you catch an extraordinary day you can get a case of whiplash from all of the chasing activity.

The third phase is really where the rubber meets the road. It is called the “peak breeding” phase, typically starting on my hunting property a few days after Christmas and running into early January.

This period is characterized by having a majority of does in a given population coming into estrus and bucks tending them. Deer movement in general slows down noticeably, and bucks are readily observed with does.

Scrapes that have been hotbeds of activity suddenly go fallow or worked primarily by immature bucks. 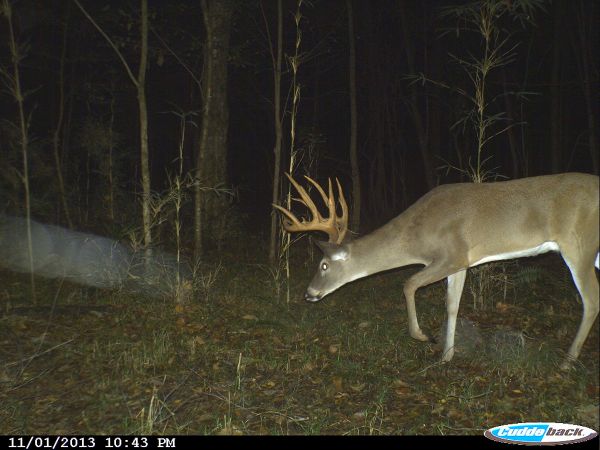 The fourth phase of the rut is referred to as the “immediate post-rut” phase. Breeding activity is rapidly waning, but mature bucks are still actively competing for the last receptive does.

This is a great time to catch a trophy buck out on the prowl. Does start to reappear at their normal food sources, and bucks begin to refresh scrapes.

The fifth phase is called the “post-rut” phase, and typically begins in my area about two weeks after the start of “peak breeding.” Most breeding activity is done for now, and most bucks ­— being pretty thin and worn out at this point in the cycle — return to their core areas and feed sources.

During this phase look for mature bucks during daylight hours at prime feed sources during extreme cold weather.

And last but certainly not least is the phase called the “secondary breeding” phase, occurring about one month after peak breeding. This is the time when un-bred does re-enter estrus and doe fawns that have become old enough for breeding come into estrus for the first time.

This final period of the rut is characterized by the reappearance of big bucks chasing does and breedable fawns in the vicinity of winter food sources. Fresh scrapes begin to reappear.

Since it is now December and the rut is upon us, get your “rut” on, tighten your chin strap, and prepare yourself for one of the most exciting and wondrous times of year for an ardent deer hunter.

Be smart, and good luck, my friend.