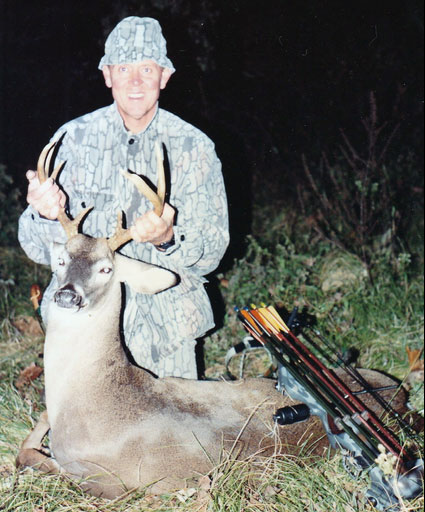 It’s the early part of November and prime time to find a primary oak tree that’s raining acorns. I spent the entire morning walking with all of my equipment. My plan was to locate a high percentage set up and climb on it, without having to make another trip to retrieve my gear. By late morning I decided I was in the wrong area and had better get out and relocate to a new area if I wanted any chance for a kill.

I went to an area about 20 miles away and started walking in. It wasn’t long after noon and I was headed for a select cut over that had been cut several years ago. Once in the cut over I started going from oak tree to oak tree looking for sign. The area was incredibly thick, but I was able to take my time and pick my way through. After I jumped a small rack buck, then another deer that I couldn’t get a look at, I stumbled into a long string of nuttall oaks. They were running basically east and west, stretched out over a couple hundred yards.

The amount of sign in the area almost took my breath away. It was just what I had been searching for. It didn’t take long to pick out what I thought was the primary feed tree. I was able to find a suitable downwind tree to climb and was set up less than 15 minutes before videoing a 6-point and seeing a rack buck chasing a doe, out of shooting range.

It was a clear, cold, beautiful day with a steady north wind. The moon was at Last Quarter plus 3 days. It’s the second day after a cold front, and the deer were moving like crazy. I saw a total of 24 while on stand and videoed a lot of them. I called in two young does with my mouth, and enjoyed filming them coming in, as well as feeding under me.

It was 4:45 when I saw him coming. I didn’t have much time to look at him, but didn’t need much to see he was a nice buck. It seemed as though he was here looking for does instead of acorns. He wasn’t going to get any closer, so I figured I better get busy and take a shot while I could. I didn’t have time to get nervous, I just guesstimated his range at 35 yards. With him broadside showing his left side I aimed and released, watching the arrow all the way. My shot looked good, then the arrow seemed to run out of gas and just drop out. I was sure I had missed him.

The buck’s reaction to the shot was to jump off to the side, then just walk in behind some trees and stand just out of sight. My thought was to try to video the one that got away, but I never got the chance. He stood around for a few minutes then when he started moving, I saw him take a few steps and lay down. I couldn’t believe what I was seeing, but it wasn’t long before a doe and a fawn tried to pass through the area and walked up on him. Observing their reaction to him laying there I knew I had somehow pulled it off.

I climbed down at 5:15, stepped off the shot at 38 yards then counted the 35 steps to where he lay. The arrow had dropped out, but not quite enough to miss him. It had passed through the very bottom of his chest cavity. He was an 8-point and I was excited to have him. After pictures, video, and field quartering, it took me over an hour and a half to pack him, my stand and other equipment to the truck. The thick cutover was really hard to get out of, especially in the dark of the night. Using a headlight I couldn’t see more than a foot or two in front of me. While using a compass bearing, I had to fight for every step, and I couldn’t always go the direction I needed to. Most of the time it seemed like I was taking two steps forward and one step back.

When I finally made my way to the open woods. I was ready for a break before continuing on to the truck. On a long pack out, about every 15 minutes, I usually find a place to sit so I can take the weight of the pack and stand off my shoulders without unloading them. It doesn’t take but a couple of minutes and I’m ready to go again. The only thing I saw to sit on was a big white oak tree top. The loggers had cut the log out at a fork near the crown of the tree. It was higher than chair height, and when I sat on it my feet wouldn’t touch the ground.

To take the weight of the pack and stand off my shoulders I had to lean back, and place the pack on one of the forks of the tree top. The pack was like a back rest and I was relieved from the weight. After a minute or so I adjusted my position and the pack slipped off the limb dropping down in the fork of the Y that the two limbs formed. The weight of the ALICE pack and stand pinned me, flat on my back, with my feet off the ground. At the time I was too tired to be concerned, but it didn’t take long for discomfort to settle in. When I tried to get up, I realized that I was trapped. For a minute or so panic set in and the more I struggled to get free, the worse my chance for escape became as my position became more secure.

Fighting to get free

The two sets of straps (pack and stand) had become very tight. It was a cold night and I found myself wet with sweat from my efforts. Everything I tried failed. My belt knife was under me between the forks and out of my reach, so cutting the straps wasn’t an option for getting free. Trapped laying flat on my back, looking up at all the stars, I figured the buzzards were going to be picking my bones clean after finishing off the carcass of the buck I had killed.

There was only one person that had a chance of locating me and that was my hunting partner, Lloyd Forman. The only problem was, this was the first day of a scheduled four day solo hunt, and no one would be looking for me for at least that long.

The only chance I had was to, somehow, pull enough slack on the straps to allow me to pull one arm free. Using my right hand I grabbed both of the pack straps on my left side and started pulling. As I pulled on the straps I kept shifting my position as much as possible. I’m not sure how long it took, but I gradually was able to collect enough slack to get my left hand, then my arm though the straps and earn my freedom.

The rest of the pack out was routine. After crossing the creek and dumping water out of my boots, for the second time today, I was only 10 minutes from my truck.