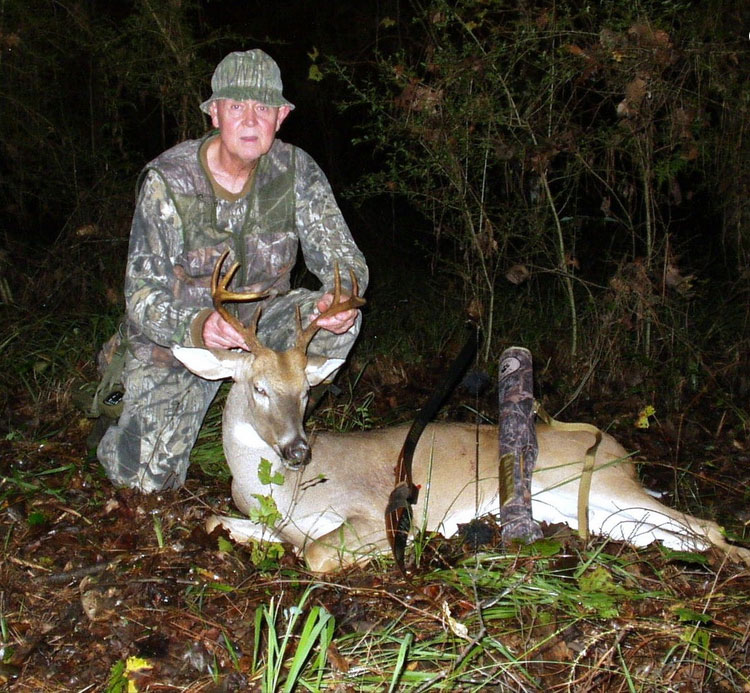 This early October evening, I was set up on a red oak that was showing some sign. I had found the tree a week ago, but this was the first day that the wind was right to hunt it. With the right wind I went back during the mid-day to check it out and found it to be even more impressive now than it was before.

I was in the stand for 5:00 p.m., but didn’t see a deer until 6:08. It was a spike and he was coming straight to the red oak. He stopped just out of range and started circling back the way he had come from. I had my grunt call set as a doe, so I gave him a couple of grunts. He stood still for awhile then continued the circle that brought him to the opposite side of the red oak from me. He hung up at about 25 yards.

When he started looking back the way he came from, I figured another deer was coming in. It didn’t take long to see that deer coming was a better buck. It was a nice little 8-point. Unlike the spike, he walked straight in. When he stopped he was 8 yards and broadside. I was ready with my Acadian Woods recurve, and took the shot.

It was 6:20, so there was plenty of light to see the arrow flight and hear the whack of the arrow’s impact. He ran northeast, stumbling as he crossed the dry drainage creek. He hadn’t been out of my sight but a second or two when I heard him go down. I stayed in the tree until 6:40. When I climbed down, I got all my gear together and walked the bearing he had taken for his run. I found my broken arrow, less the broadhead, about 20 yards from the hit. I crossed the drainage creek and soon saw him. He had only run 45 yards.

After pictures and show and tell video, I did the field quartering thing and packed him and my equipment back to our house.

Note: This wasn’t the first time that I had seen this buck. I was able to video him with a few other deer in our back yard during the summer.

You can read more from The Womack Journal here.

After one week of letting the brine work its magic, you are left with some of the finest venison sandwich meat known to man. […]