Chronic Wasting Disease (CWD) slithered into Louisiana when the Louisiana Wildlife and Fisheries announced on Feb. 2, 2022 that a suspected case of CWD was reported in a harvested deer.

The tentative diagnosis was made on samples submitted by LDWF staff from an adult buck taken on private land in Tensas Parish. The Louisiana Animal Disease Diagnostic Laboratory confirmed the results.

Since then, LDWF officials imposed an emergency ban in July on deer supplemental feed and deer carcass exporting encompassing all of Madison, Tensas and Franklin parishes. These areas are heavily hunted by sportsmen from around the state, producing many trophy deer each year.

In August, pressure from hunters and elected officials led the LDWF to reduce the ban’s area to approximately 10 miles in Franklin Parish.

“We know that there was some environmental contamination,” LDWF Deer Program Manager Johnathan Bordelon said in a July 7 meeting.

“(The Tensas Parish deer) had been shedding infectious material into the environment for some time. We did not know where that deer came in contact with the disease and whether or not it spread the disease to other deer in the area.”

The ban has no “sunset,” meaning the time it is active could be forever or just temporary. LDWF has a goal to collect 300 samples this year to obtain more details about CWD.

If hunters or landowners have any questions, they should contact their local LDWF officials to make sure they understand the regulations and borders of the ban.

Many hunters, business owners and lawmakers balked at the LDWF ban on feeding and the reach of the ban, claiming the ban would hurt businesses relying on the annual deer season.

Leading the push to reduce the original control area’s ban were Rep. Neil Riser and Sen. Glen Womack. Riser, who sits on the Natural Resources and Environment committee, led an oversight hearing in which the reduced area was proposed.

“This issue has always been how will a hunter define that area; how will enforcement do that,” Riser said.

“Sen. Womack recognized how serious CWD is, so we don’t want it to spread,” Riser said. “But, like Franklin Parish and other rural agricultural parishes, it was covering a lot outside the 25 miles. We’re trying to revise and narrow the ban width. We looked at the true 25 miles.” 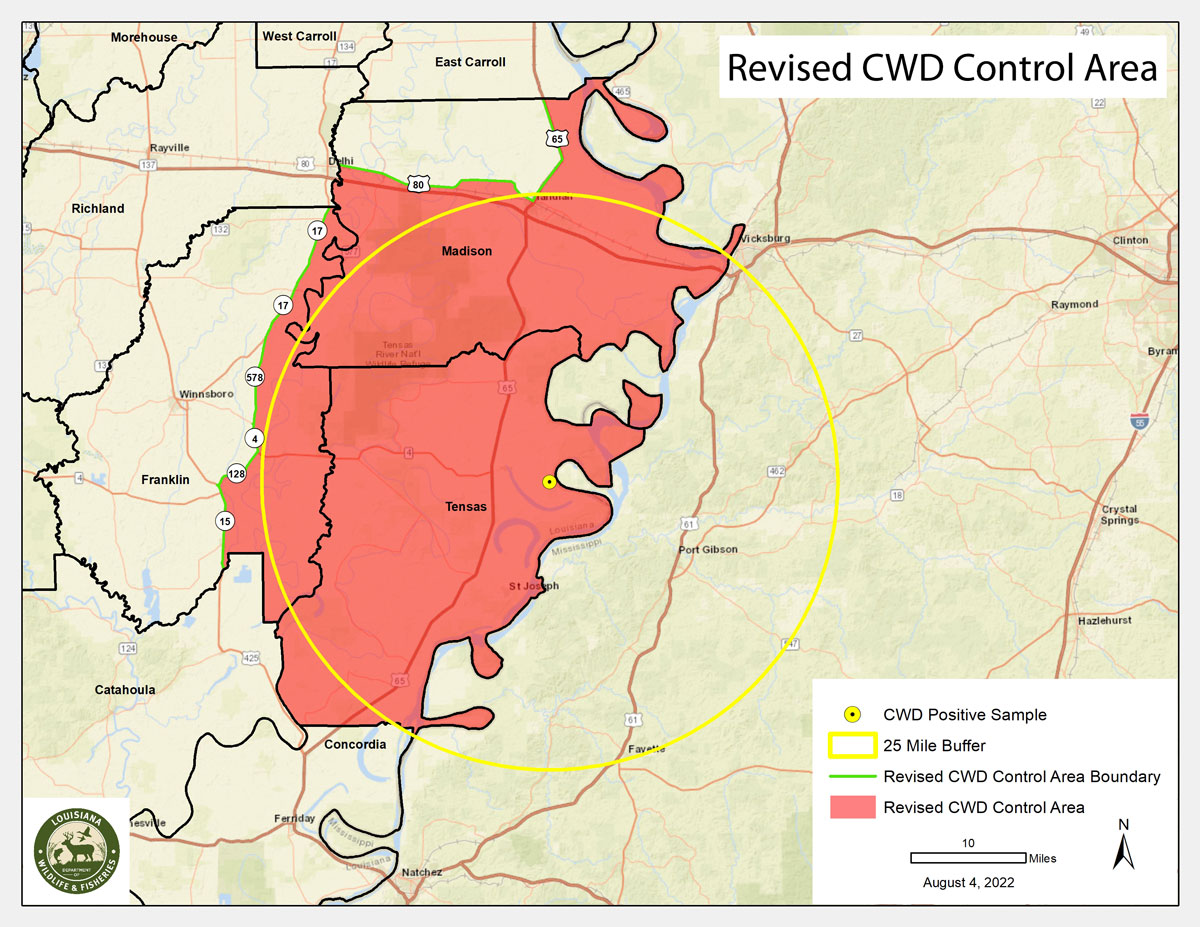 Riser and Womack’s main argument was the negative impact on businesses that sell the deer feed such as Sullivan’s Feed & Western Wear in Winnsboro, Franklin Parish’s seat. On an average year, Sullivan’s will sell $400,000 worth of deer feed and sells to an eight-parish area, according to Jessica Sinclair, owner of the business.

“This is going to affect everybody from me, farmers, the hunter providing their family some meat, the processors, the taxidermists even to older couples with land leases,” Sinclair said. “If you can’t feed, a hunter is not going to sit there all day and wait for nothing. Feeding and baiting is a big part.”

Recreational feeding of the deer is also popular in this region, Sinclair said. Some people feed the deer to watch them, and under this proposed law, they can no longer feed the deer.

Paul Bartleson of Tensas Parish said LDWF officials were being “vague” about CWD and their methods of control.

“One deer found at Yucatan and no other deer found around it? How do you have a problem and only be one deer?” he said. Bartleson said he felt that one case was not enough for any bans. “In my opinion, (CWD) might happen, but it isn’t here yet,” Bartleson said. “When they get more than one isolated case or a blow up, that’s a different case.”

During the hearing, Bordelon explained to the Natural Resources and Environment committee the requirements of the control area. It is a deer carcass export ban, meaning any deer harvested in this ban area cannot leave the area unless it has been quartered, processed to the point where the spinal cord and skull cap has been cleaned efficiently and removed, Bordelon explained.

LDWF will also track deer to taxidermists harvested in the control area.

“If you are a hunter and just harvested a buck you would like to take to the taxidermy, you bring the deer to any taxidermist within the control, regardless of the parish as long as that parish is within the control area,” Bordelon said.

However, if you want to bring it to a taxidermist outside the control area, Bordelon said, “the commission tasked us with developing an electronic waiver. A waiver that would allow hunters to transport certain parts outside the control area, and the parts in this case would be prohibited to move. You would have to go to our website because you may harvest that deer outside of normal office hours.”

With that waiver, a hunter would provide specific information such as LDWF number, parish in which you harvested the deer and affirmation during that process, stating you agreed to the conditions, according to Bordelon.

A hunter has 72 hours from the execution of the permit to bring the carcass to the taxidermist. Once a hunter has the unique number, he or she can then move the deer with the number on their smart device or have it printed out. Once at the taxidermist, he or she has to agree to two things: dispose of the carcass (double bag items and dispose in a trash container) and must retain a unique identifier with their customer records.

In 2021 during the season, a similar feeding ban was imposed in parts of Morehouse and Union Parish as a reaction when a deer harvested in south Arkansas just a few miles from the state line was confirmed with CWD. After testing several hundred deer, none were found with CWD there.

Warren Womack got his 28th bow kill, a doe, by holding three willow saplings together to secure his stand. […]