Wet weather during warm season points to an excellent year for deer and possibly an early peak of breeding, no matter where you’re hunting.

The COVID-19 pandemic continues to create problems, but take heart, deer season will happen as scheduled, and the very wet spring and summer have made for excellent growing conditions for both habitat and deer.

Many hunters know that breeding dates for white-tailed deer are based upon embryo and fetal measurements. The Louisiana Department of Wildlife and Fisheries’ website has these dates and a breeding map for the state (www.wlf.louisiana.gov/page/deer-breeding-periods). During my tour of duty with the department, I spent a good deal of time gathering this data.

Breeding ranges were established for various areas using the earliest and latest known date. This range may include a time period of 3 to 4 months, depending on the size of the collection. The average peak breeding period, generally 2 weeks, is also presented. While this is always a good time to hunt, the fact is, breeding can shift forward or backward every year by a week or two. If the rut comes early, hunters who wait until the average peak may miss out on some good hunting opportunity that might occur early in the season, and likewise, hunters who hunt a late rutting herd may use up all their vacation time if they hunt too early. This effort presents the predicted breeding dates for 2021, and it appears the rut will be an early one, something many deer hunters desire, since it gives them opportunity in the late season to hunt ducks. 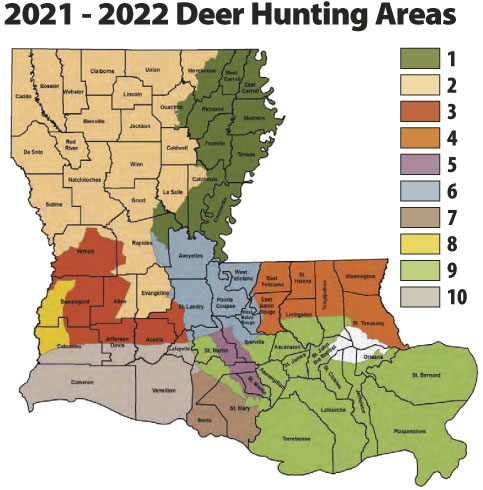 The prediction for 2020 was for breeding to start at the beginning of the first 2 weeks of the peak month for each area, for example, November for Area 2 and December for Area 4. But it seems the peak activity may have been around the second and third weeks of the various months. In Area 4 in East Feliciana Parish, I killed a 3½-year-old, 6-point buck that was feeding early one morning on Dec. 11. It had a good body at 160 pounds but not much headgear. The tarsal glands indicated it had been scraping. Over the next few days, I saw deer, but nothing that I wanted to shoot. Then, on Dec. 17, deer sightings went to zero, and I mean zero. It wasn’t until Jan. 2 that I saw my next deer, two racked bucks feeding together. What I think happened was that the actual breeding activity was going on and deer were in what many hunters called lockdown. As I have often alluded to, during the breeding time, it seems that deer just disappear, only to reappear once the breeding is over. During the first breeding period, biologists expect to see about 70% to 80% of the does bred, then the remaining does will cycle and breed during the next round of activity.  I continued to see deer for the rest of January, including several adult bucks that I hope will be around this season. 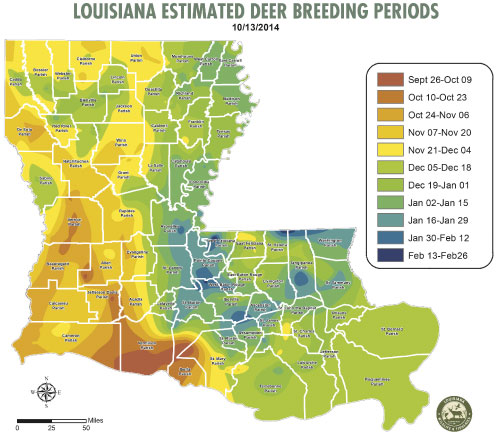 The prediction for 2021 is a rut where peak scraping begins before the peak month in each particular area. This would mean earlier deer activity than last year, and hunters should be prepared for this with their vacation schedules. If one waits until the holiday seasons, Thanksgiving and Christmas, the good activity may be over in some areas. This is one of those years when hunters will be able to hunt the predicted rut in all areas. Sometimes in the late breeding areas, the rut extends into February and hunters miss out on some action.

Areas 3, 7, 8 and 10, most of southwest Louisiana, are early rut areas. Archery season opened on Sept. 18, and gun hunting begins in early October. Bowhunters should have seen good activity when that season opened. This is not the land of big bucks, but a 130-class deer is possible. West Bay WMA and Fort Polk WMA are the primary public deer-hunting areas. Some federal refuges that offer limited deer-hunting opportunities.  While the weather is often warm, the rut is on, and it’s time to hunt. Hunters in Area 10 need to be aware that the season limit is three, not six like most of the state. Area 10 hunters should also note the either-sex and bucks-only days.

Northwest and central Louisiana make up Area 2. It covers a large portion of the state, and November is the key month to be hunting. However, with an early rut being predicted, the first primitive weapons season and the opening week of gun season should prove to be great for hunters. As previously mentioned, the 2020 rut appeared to have peaked around Nov. 15. There are within this area, pockets of deer that, due to their genetic make-up, breed later than what one normally sees in Area 2.  Check out the LDWF website to find these.

While most of Area 2 is considered to be piney woods habitat, this area will produce some trophy deer. If you passed up some small, adult bucks last year, it is anticipated that with this year’s extended growing season due to abundant rainfall, they will be larger.

Area 4 includes southeast Louisiana, north of Lake Pontchartrain, and is well known as the Florida Parishes. Area 9 includes some portions north of Lake Pontchartrain as well as those lands south of the lake. Area 4 is predominately piney woods habitat, while Area 9 includes marsh, swamp and hardwood forests along the Mississippi River. Both areas will produce quality deer and an occasional Boone & Crockett class buck. Like southwest Louisiana, a 130-class buck is a trophy. Habitat changes and suburban sprawl have taken its toll on the deer landscape. For whatever reason, Area 4 continues to have a 3-deer limit, rather than the statewide 6-deer limit. Hunters should see activity in mid-November this year.

Areas 1 and 6 include bottomland hardwood and swamp hardwood forest habitat with agricultural lands along the Mississippi River. This is the land of the giant, trophy bucks. Area 5 includes the lower Atchafalaya River Basin and is swamp/hardwood habitat with some agricultural lands. In recent years, this area has been hammered with heavy flooding and like Area 4, it has a 3-deer limit. The rut in these areas generally occurs in January and February, and it is not uncommon for hunters to continue to see rutting activity in March and even bucks with antlers in early April. This year, rut activity should begin in December and be over with by the end of January. Does in these areas do not generally wean their fawns until after November due to the late fawning, so bowhunters should keep this in mind. 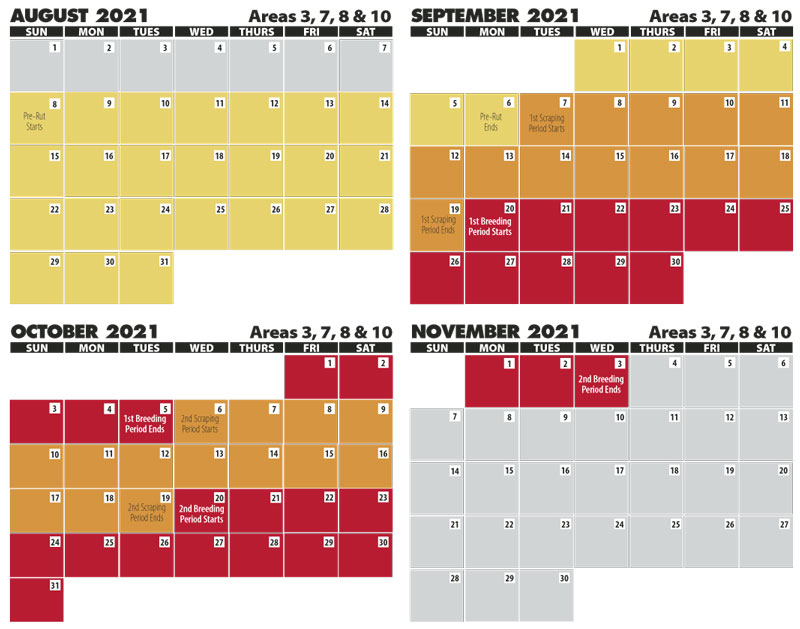 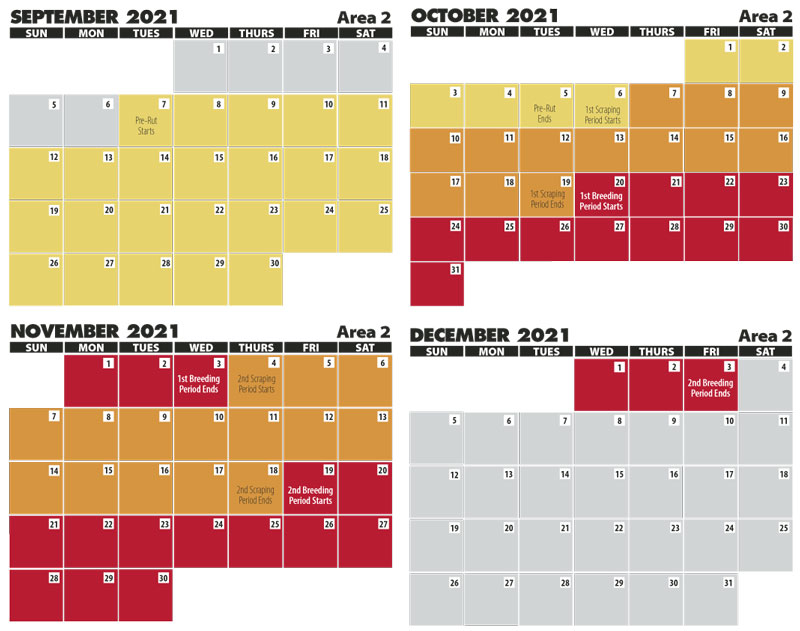 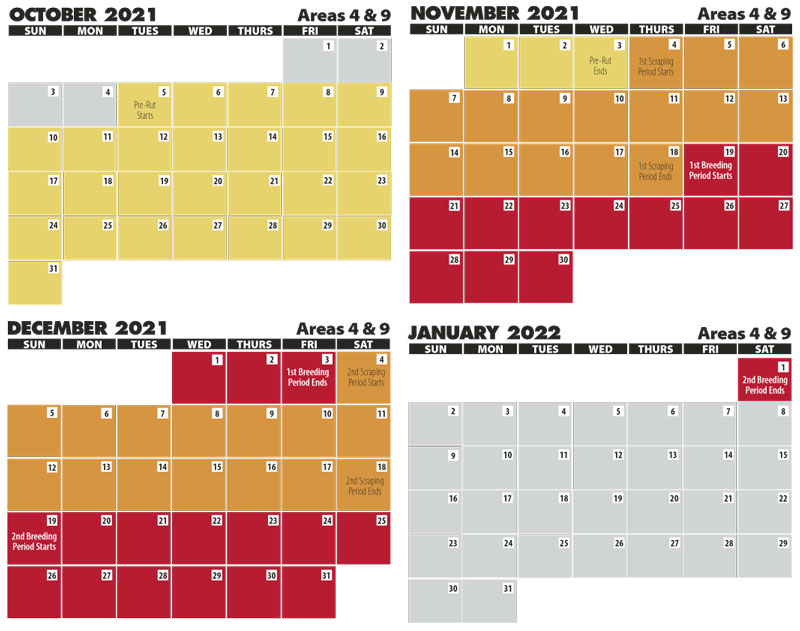 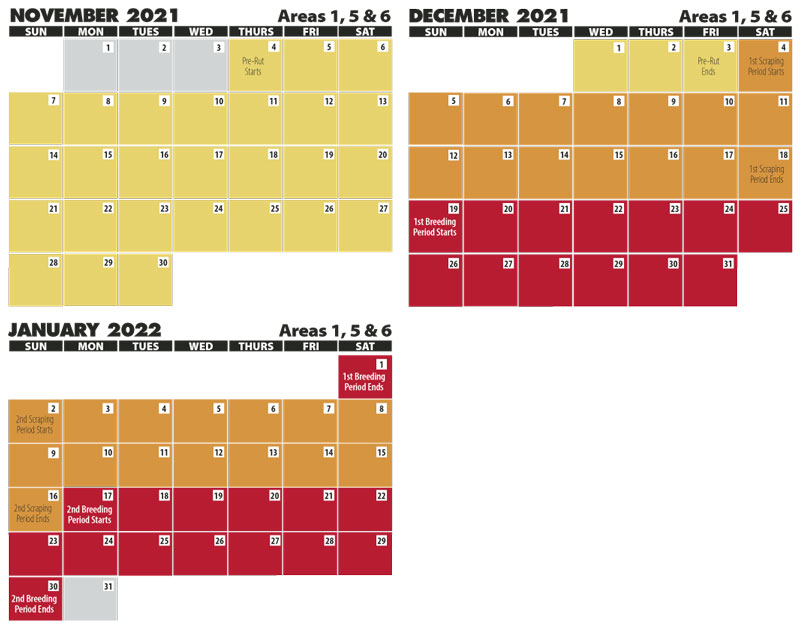 As always, it is important for hunters to read the 2021-22 Hunting Regulation brochure. While the tagging system has not changed, stores no longer issue the nice deer tags we have been getting. Instead, tags are printed on regular paper, so you will have to do some work of your own to make them waterproof and tear proof. Hunters still have to report their harvest, and it is important that you do this so biologists will get sound information on when to establish seasons and adjust regulations.

About David Moreland 240 Articles
David Moreland is a retired wildlife biologist with LDWF, having served as the State Deer Biologist for 13 years and as Chief of the Wildlife Division for three years. He and his wife Prudy live in rural East Feliciana Parish.