ARE YOU READY? Cause this guy’s whole purpose is to outsmart you.

Wary bucks that move almost like ghosts let their guard down for several weeks each fall to breed, and having a grasp on the stages of the rut in your particular area of the state is key. 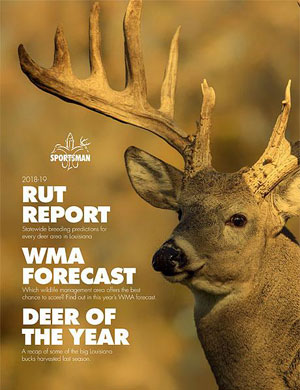 Dave Moreland, who retired from the Louisiana Department of Wildlife and Fisheries as the Deer Study Leader, prepares an annual Rut Report that’s featured every fall in Louisiana Sportsman magazine. This year, his full report was highlighted in the October issue.

His years both as a LDWF biologist and hunter of whitetails in Louisiana give him a unique perspective in plotting out the rut calendar. 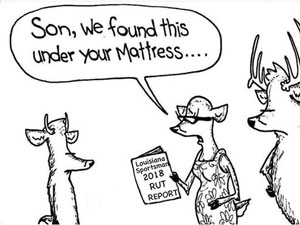 “Using that as a starting point is how I determine the pre-rut …. A lot of biologists will tell you the moon phase has nothing to do with breeding, which I think is not correct.”

It also won’t hurt if Mother Nature cooperates with a little bit of real winter this year. Cold weather is always a good thing, Moreland said.

“A cold front doesn’t really kick the rut off, but it helps the movement activity you normally want to see. In the fall, the deer lose their summer coat and get their winter coat, and if you have 80- and 90-degree temperatures, they’re very uncomfortable moving around and just lay up in the shade trying to stay cool,” Moreland said. “But if you get that colder weather, they need to burn energy to create heat and stay warm, and they need to feed more, so it influences their activity.”

You can get instant access to Louisiana’s most comprehensive report on your handiest device. Download our digital edition complete with calendars of each area here www.sportsmangear.com/products/2018-2019-rut-report-wma-forecast to get the detailed rut report featuring specific dates for your area, including Louisiana’s Deer of the Year recap, the annual WMA Forecast and pictures and stories from last season’s biggest deer.

Hunters can hike in to their hunting spot with the lightweight, super strong Alumalite CTS Pro climbing stand. […]

Across Louisiana, there’s plenty of public access, a large squirrel population, a liberal bag limit and a long season. […]

Veteran Louisiana angler and writer Humberto Fontova has taken his case about the benefits of offshore oil rigs to the nation. […]